Abortion in Israel: Why is there no public conflict?

Analysis: US-Israel on abortion – why has it played out so differently in the 2 countries? After landmark US ruling, an exploration of the Jewish state’s policies. 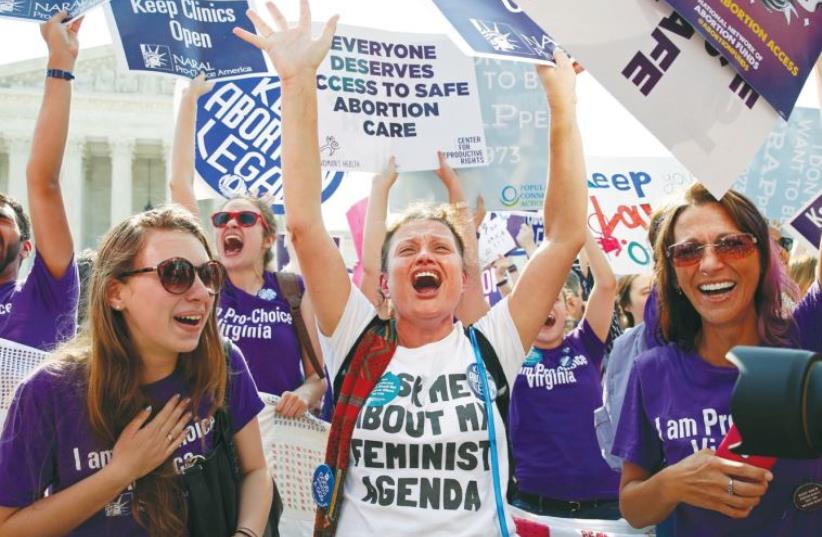 DEMONSTRATORS CELEBRATE at the US Supreme Court in Washington on Monday after the justices struck down a Texas law designed to restrict abortion.
(photo credit: KEVIN LAMARQUE/REUTERS)
Advertisement
With the US Supreme Court’s landmark ruling on Monday in favor of abortion rights in the ongoing culture war on the issue that will now be re-inflamed, it is worth revisiting the issue in Israel and why there is so little public conflict about it here.First, let’s unpack what the US court decided.The context is the US Supreme Court’s historic 1973 Roe v. Wade ruling and its 1992 Planned Parenthood v. Casey ruling, which collectively affirmed a woman’s right to an abortion in the first trimester and prohibited state laws that unduly burdened that right.Since then, conservative US states have tried a variety of strategies to impose conditions on abortions or abortion centers that were framed as pro-women’s health, but were also intended to reduce access to abortion.Texas had passed a 2013 law demanding that abortion clinics and their doctors meet certain strict medical standards regarding their ability to practice in other institutions and surgery that are not universally enforced. These standards would likely have eliminated more than 75 percent of Texas’s abortion centers, and more than 20 conservative states in the US had passed similar laws, laws that some lower US federal courts had affirmed.The US Supreme Court’s 5-3 ruling said that the law was unconstitutional because such legislation must weigh whether the imposition on women’s right to an abortion outweighs the health benefit, with this law failing the test.Commentators expect the ruling to lead to most of the other similar laws across the US to fall – meaning a massive victory for the abortion rights side of the debate.Why is this issue never before Israel’s High Court of Justice? Why are there no loud culture- religious wars in Israel over the issue, especially when there are so many other similar wars between the haredim and the rest of the country? The nuanced answer seems to be that Israel is both far more liberal on abortion policy in a way that satisfies secularists, and more conservative in a way that satisfies the ultra-Orthodox.On the liberal end, between 96% and 98% of women who seek state financing for an abortion are approved. Just as crucially, Israel approves abortions as late as the 40th week of pregnancy.This is a very high rate and a very late approval deadline relative to any Western country, and makes the US look medieval with its first trimester cutoff.On the conservative end, there is no “right” to an abortion in Israel as there is in the US.The Israeli High Court has never dived into the issue to announce such a right as the US Supreme Court did in Roe v. Wade, and the Knesset law that governs the issue makes the right conditional.In order to legally have an abortion, women must apply to abortion committees and fit one of four categories. Suddenly the US sounds far more modern.Except at a 96-98% approval rate, the committees are essentially a rubber stamp. People have figured out that if they do not really fit the four categories, they can lie and fit into the fourth one – claiming that having the baby will give them mental problems (which for many is probably less a lie than an exaggeration).So the pendulum swings back to Israel being extremely liberal.But why do the haredim tolerate this situation where it is so easy for women to get abortions? There are a few more nuances to toss into the mix.First, when the haredim got the abortion committees established, they never envisioned that they would become rubber stamps, and considered them a moral victory by having blocked a “right” to an abortion.Next, as high as the approval rate is, the committees’ very existence does heavily discourage abortions and push people off the radar. Some experts estimate that half of the abortions in Israel are done illegally and outside the abortion committee system.Reasons women might go this path could be: They do not realize the committees are a rubber stamp; they do not want to lie and say they will have mental problems; the child is from an affair; or that the committees’ process sometimes delays the abortion for a few weeks before it reaches a decision.Haredim may not like this either, but they tend to prefer solutions that are off the radar which they do not have to publicly be a part of.Besides that, the haredim have their own secrets to deal with. While there are no numbers, there is a phenomena of haredi women who get pregnant outside of marriage and whose situations are covered-up to avoid shame personally and to the community.So drawing attention to the issue could have internal downsides.Finally, there is the group Efrat – Committee for the Rescue of Israel’s Babies, which boasts that it has convinced women to give birth to over 64,000 children who might otherwise have been aborted since 1977.In other words, between the committees as a gatekeeper/ deterrent and Efrat as a more positive incentivizing force, the haredim feel they are having a substantial impact on the issue.From time to time, secularists bemoan that the abortion committees exist and that so many women get pushed into having illegal abortions that cost more and are less safe.And maybe someday the committees will be abolished and a new war with the haredim will begin.In the meantime, Israel’s odd and imperfect system does seem to provoke both sides of the debate less than is the case in the US. There, the latest Supreme Court ruling probably promises more a change of tactics by conservatives to block abortions than it does an end to the war.