Richard Trank, the Academy Award-winning director, says it is time to focus on the long, colorful life of David Ben-Gurion.

By AMY SPIRO
OCTOBER 29, 2018 12:24
Richard Trank and cinematographer Jeffrey Victor filming at Sde Boker
(photo credit: MORIAH FILMS)
Advertisement
How much does the world really know about David Ben-Gurion? Not as much as Richard Trank, the Academy Award-winning director, would like them to know.
More than three years ago, Trank – who has partnered with the Simon Wiesenthal Center on more than a dozen films – set out to create a documentary on Israel’s legendary first prime minister.In early 2016 he flew to Israel to interview former president Shimon Peres, one of a small number of Israelis alive at the time who personally knew Ben-Gurion.“I said to him, Mr. President, when you’re ready I would love to make a film about your life,” Trank recalled in a recent interview with The Jerusalem Post. “And his response was: ‘Who would be interested in seeing such a film?’”But the director convinced Peres to go ahead with the film, and Trank filmed about 50 hours of interviews with him before his death at age 93 in September 2016. That film, Never Stop Dreaming, narrated by George Clooney, was completed earlier this year, and Trank is waiting to release it on the film festival circuit. 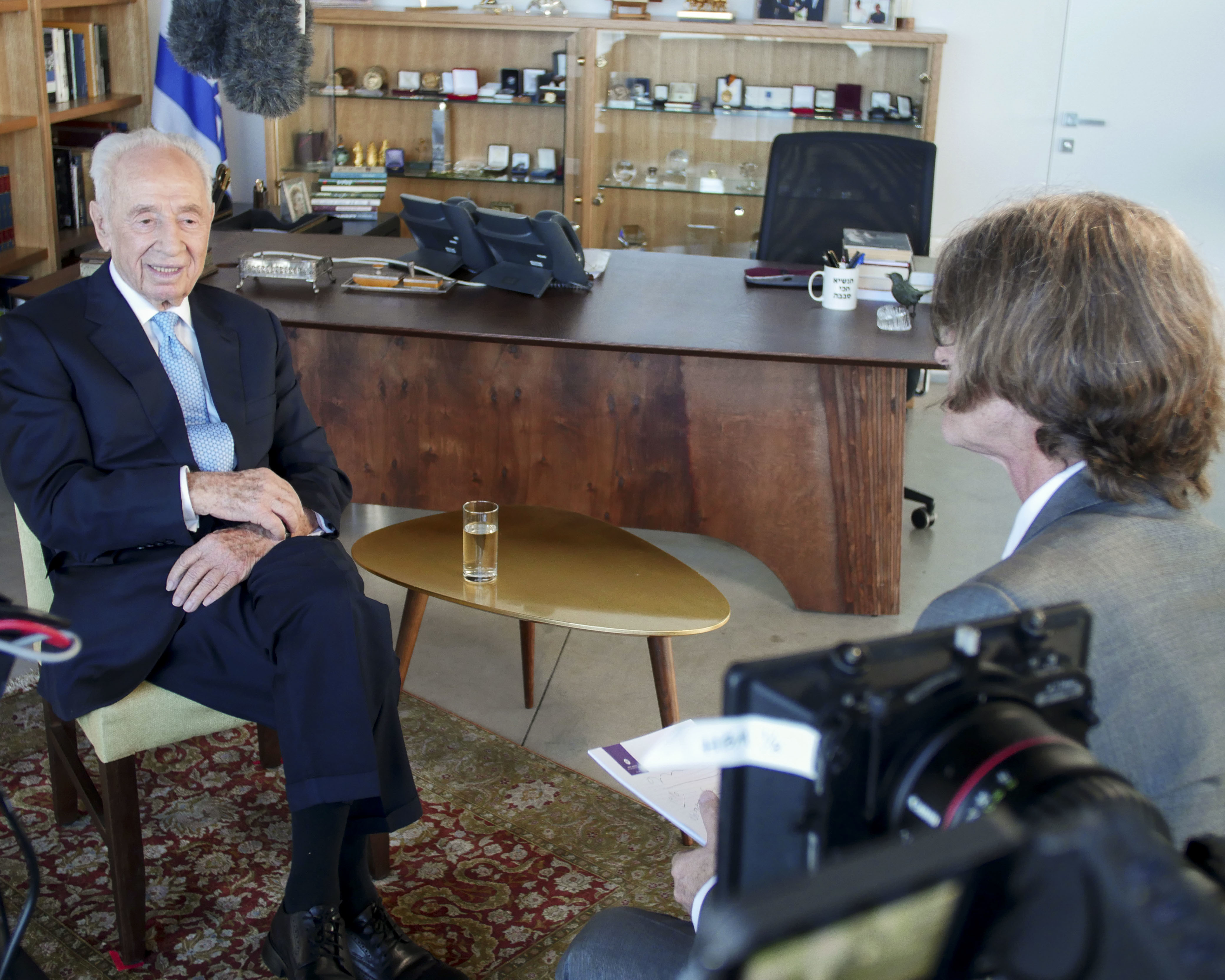 Trank interviews Shimon Peres about David-Ben Gurion in 2016 (credit: Moriah Films)But he has turned his attention back to veteran statesman Ben-Gurion, the man who devoted his life to the creation of the modern State of Israel.“There really hasn’t been a film about Ben-Gurion that I’ve ever seen, done like that,” said Trank, who won an Oscar in 1997 for The Long Way Home, the story of Jewish refugees after the Holocaust, narrated by Morgan Freeman. The director was also behind 2010’s Winston Churchill: Walking With Destiny and 2012’s It Was No Dream: The Life of Theodor Herzl – both narrated by Ben Kingsley. He also adapted Yehuda Avner’s book The Prime Ministers into two documentaries in 2013 and 2015. But he believes it is high time to focus on the long, colorful life of Ben-Gurion.“I think it’s important in this particular time period, especially for young people,” said Trank. “We don’t just make these films for Jewish audiences; these are films that get released in theaters, festivals, on Amazon Prime and on Netflix.”And there’s plenty to say about Ben-Gurion, the longest-serving prime minister in Israel’s history, who died in 1973 at age 87. The notoriously stubborn, bookish world leader fought most of his life for a Zionist homeland, watching his dream become a reality at age 62.“I want it to be a complete picture of his life,” said Trank. “Some things he said were kind of startling, [in] other things he was very, very aggressive and forward-thinking. He was unique, self-taught... the amount that this guy read – and he taught himself Greek and Latin. He was somebody who didn’t realize he was being amusing when he was being amusing. He could be very short-tempered.”The Ben-Gurion film will obviously be a very different experience from the Peres film, which focused heavily on interviews with the late prime minister himself. When it comes to Ben-Gurion, Trank is hunting through archival information and sitting down with relatives and biographers. In addition to Peres, he has already interviewed Yariv Ben-Eliezer, Ben-Gurion’s grandson, historians Anita Shapira, Benny Morris and Gil Troy, and former Labor leader and current Jewish Agency head Isaac Herzog.“It’s been a challenge,” said Trank. “Shimon Peres was one of the last living links to Ben-Gurion... but there’s a lot of great archival stuff, and this’ll be a film that’ll have a fair amount of narration.”The catalogue of the Simon Wiesenthal Center’s Moriah Films division lists an impressive slate of narrators – from Clooney, Kingsley and Freeman to Dustin Hoffman, Nicole Kidman and Kevin Costner. So who does Trank have in mind for Ben-Gurion?He won’t say yet, “but if it works out the way I hope it works out, it will be a complete game changer for this documentary in terms of reaching young people.”Meanwhile, Trank is digging through archives and discovering things he never knew about Ben-Gurion.“When Ray Charles visited Israel for the first time [in 1972 or 1973], they shlepped him out to Sde Boker,” said Trank. “And Ben-Gurion is sitting at a piano with Ray Charles playing, and you can kind of tell Ben-Gurion is wondering, Why are they making me do this?” Indeed, Ben-Gurion had little patience for things he didn’t see advancing the Zionist cause. And while he suffered through meeting Charles, he nixed the visit of another musical icon earlier in his life, said Trank.“The Beatles, when they first made it big – Brian Epstein, their manager, was in the process of negotiating a tour for them in Israel in 1964 or 1965,” said Trank. “And Ben-Gurion nixed it. He didn’t think it would be a good influence on the young people.”It’s clear that Trank will have more than enough material to put together a compelling and informative documentary.“The picture will be a very multifaceted picture,” he said. “We’re telling the story of an icon.”