After Nasrallah threats, Eisenkot says IDF ready for any challenge from North

Speaking day after Hezbollah chief issues another threat to retaliate for Kuntar killing, chief of staff says: Our enemies will face severe consequence if they try to undermine our security. 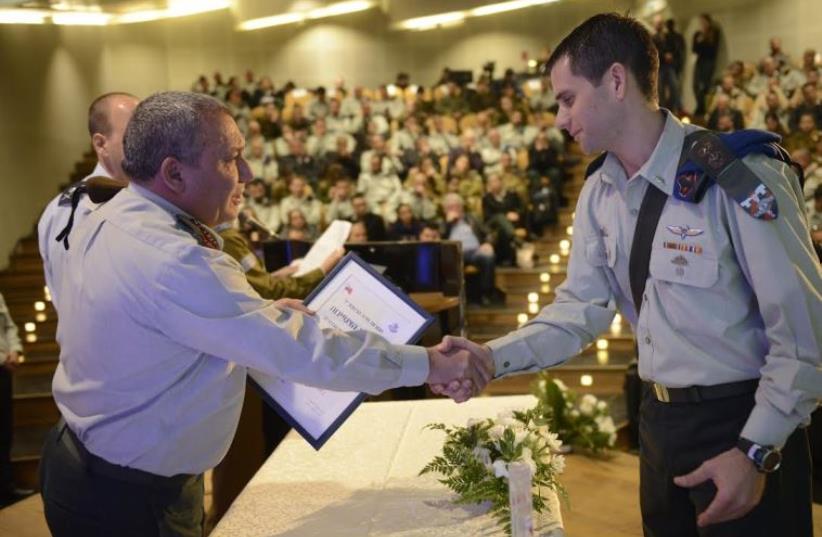 Eisenkot handing out an award, December 28, 2015
(photo credit: IDF)
Advertisement
The IDF stands ready to face “any challenge” from the North, and Israel’s enemies will pay a dear price if they seek to undermine Israeli security, Chief of Staff Lt.- Gen. Gadi Eisenkot vowed on Monday, one day after Hezbollah chief Hassan Nasrallah threatened for the second time in recent days to retaliate against the killing of Lebanese terrorist Samir Kuntar.Eisenkot spoke to commanders and soldiers from outstanding units who received the chief of staff’s prize, at a ceremony held at Herzog Camp in Glilot, north Tel Aviv.
Hezbollah chief Nasrallah: Israelis hiding like rats along border, Kuntar revenge will come
He said that “the importance of interconnectivity and unity in the IDF receives an added importance during these days, when we face a complex security reality. Our soldiers deal with murderous terrorism every day, and stand against it with bravery, a cool-headed approach, and uncompromising determination. Beyond our borders too, facing the threats we hear to the North, we stand ready for any challenge, and as we have proven in the past, we know how to find and hit all who seek our harm.”The chief of staff warned that “our enemies know that if they try to undermine the security of Israel, they will face severe consequences.”He added that “to ensure the IDF’s power in any clash that comes our way, we are placing readiness and training at the top of the priority list... and we are changing and developing to adapt the IDF to the challenges of the future.Brigades, battalions, reserves units, instructors, combat support and technological units received the award.On December 19, Kuntar was killed in a missile strike on his operations center in a southern Damascus suburb. Prior to his assassination, Kuntar had become a full-fledged Iranian operative, and reportedly went against Hezbollah’s attempt to downgrade its anti-Israel operations from Syria.The alleged Israeli-targeted assassination, reportedly using long-range precision-guided missiles, was designed to disrupt future terrorist activities planned by Kuntar – plots that were directly supported and funded by Iran, though, somewhat surprisingly, not by Hezbollah, according to Lebanese reports.