After over a decade of dreaming, tourist ferry connects Haifa, Acre 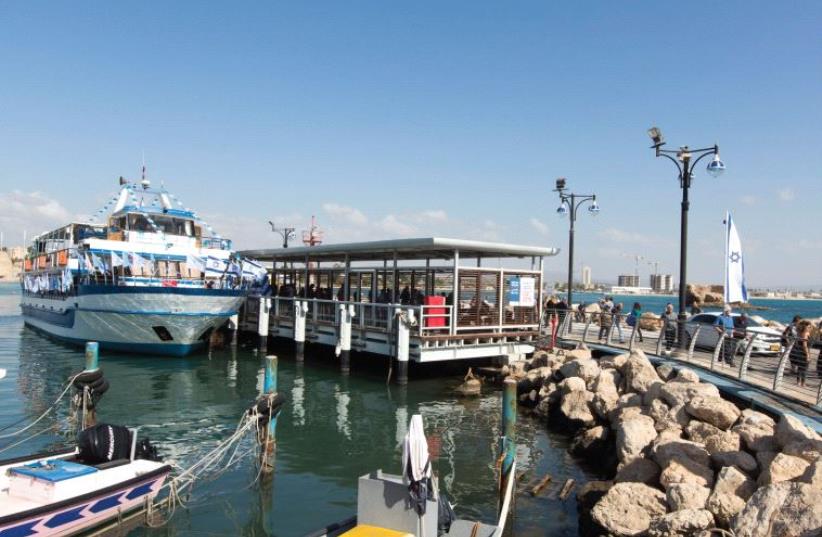 A FERRY that will run twice daily from Haifa to Acre and back docks at the Haifa port.
(photo credit: ITAMAR GRINBERG)
Advertisement
The ferry was packed with eager attendees on Monday as Tourism Minister Yariv Levin along with Haifa Mayor Yona Yahav and Acre Mayor Shimon Lankri inaugurated the 200-passenger boat which will ferry tourists between the coastal cities of Haifa and Acre.Speaking to The Jerusalem Post, Levin said the ferry line is part of an ongoing effort to put Haifa and Acre on the Israeli tourism map. “Haifa and Acre have a lot to offer to tourists and a lot of potential, this cruise line between Haifa and Acre will enable the tourists to travel and to see the views between the city and the feeling of being in the silence of the sea,” he said, “I do believe that this is the first step in an ongoing effort in Haifa and Acre in order to expand the infrastructure to make sure that the tourists that come here will enjoy an excellent experience during all times of the year.”The ferry, which will cater mostly to tourists, costs NIS 30 for a one-way ticket and NIS 55 for a round trip; the trip takes around 45 minutes.While the ship itself is not new and is run by Acre Queen Cruises, the Tourism Ministry dedicated NIS 11 million toward upgrading the Haifa and Acre ports in order to operate the line. According to Tourism Ministry estimates, the cruise ship will attract thousands of tourists to Haifa, Acre and Israel in general.The cruise line will depart from Acre at 10 a.m. and 3 p.m. and from the Haifa Port at 11 a.m. and 4 p.m. seven days a week beginning on Succot (there is an extra sailing during the Succot holiday at 1 p.m.).The project, which has been talked about for over a decade was halted and postponed due bureaucracy and disinterest.However, according to Levin the cruise line was made a priority.“Many people said ‘you won’t succeed, it’s impossible, many people tried for 20 years,’ but when you work hard and when there is good will from all the partners you can do a lot of things and I think that the outcome today is something brilliant.”Levin later tried his hand a captaining the inaugural ferry ride to Acre, which took the cruise ship 10-minutes offcourse.“Make a hard-right so you don’t steer us to Egypt!” one passenger remarked.Yahav praised the cooperation between Acre, Haifa, and the Tourism Ministry at the ceremony on Monday but also displayed some competitiveness saying that Haifa is the most beautiful city in Israel. “Anyone who doesn’t believe this can leave,” he joked.Lankri said he did not want to enter in to the beauty competition, but that Acre, “can really be picked for the title of gorgeous.” Lankri continued praising his city as a model of cooperation: “It is possible to make tourism in the periphery and also to protect and maintain the tourists, and also to do this together with the original residents and the entrepreneurs in Acre,” he said.Both cities looked beautiful from the ferry ship with views of the Carmel Mountains in the background. Passengers who leave from Haifa arrive in the Acre Old City where they are greeted by narrow alleyways and the city’s active fisherman’s port.“This took time, there were a lot of people and more than 10 years of bureaucracy,” said Edward Khoury, 38, owner of Acre Queen Cruises, “but here is the line, it works and I think it will be very successful.”