The Russians made appearances at the Cave of the Patriarchs in Hebron, Rachel’s Tomb in Bethlehem and the Western Wall tunnels in Jerusalem. 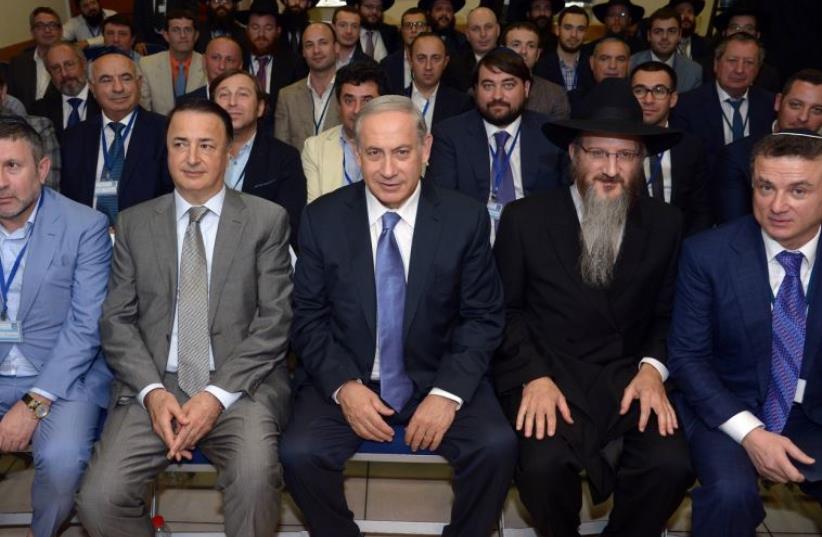 Russian Chief Rabbi with PM Netanyahu
(photo credit: HAIM ZACH/GPO)
Advertisement
In an apparent bid to send a strong message regarding Jewish claims in Israel, Russian Chief Rabbi Berel Lazar capped off a four day trip in which he brought 50 Jewish community leaders to contested holy sites across the country.The Russians made appearances at the Cave of the Patriarchs in Hebron, Rachel’s Tomb in Bethlehem and the Western Wall tunnels in Jerusalem, all ancient Jewish sites whose ownership is contested by the Palestinians.Recent attacks have been spurred by Palestinian calls to “protect” the Temple Mount’s al-Aksa Mosque from Israeli “settlers.”Israel has promised to maintain the status quo on the Mount, which precludes Jewish prayer but does allow pilgrims to walk around the site.Accompanied by Lev Leviev, the billionaire president of the Federation of Jewish Communities of the Commonwealth of Independent States, Lazar met with Prime Minister Benjamin Netanyahu on Sunday, telling him that they had “come to deliver a message that terrorism must not win.”“Therefore, despite these current hard times, we have chosen to visit all the locations in which terror has struck during the last days,” he said.“The delegation arrives during these troubled times, in order to show the world that now is the time to come and visit the country,” Leviev told the prime minister. “Now is the time for us to prove to the world that we have no other home than Israel, home of all Jewish people, anywhere in the world.”Speaking to The Jerusalem Post in the Kotel Tunnels, following a tour with Chief Rabbis David Lau and Yitzhak Yosef and Western Wall Rabbi Shmuel Rabinovitch, Lazar said that the visit showed that “we are all together.”He recalled speaking with Israeli soldiers during the trip and telling them that they are not just watching over Israelis but over all of the Jews of the world.“A strong Israel is a strong Diaspora and a strong Diaspora is a strong Israel. Standing together makes it much easier for all of us,” he said.The visit strengthened some of the participants, many of whom were anxious about coming.“It’s an incredible message of strength and the people will go back their cities [in Russia], will not be scared and will be proud Jews and succeed in their mission,” he said.Rabbi Moshe Azman, a prominent Ukrainian rabbi and a member of the same Chabad hassidic movement as Lazar, was also in Israel this week and issued a call for increased Ukrainian immigration to Israel as a solution to Arab terrorism.Thousands of Ukrainian Jews have come over the past year as a result of the Ukrainian conflict and concomitant economic malaise.The local Jewish community has been active in encouraging their move here, Azman said.“These terrorists want to kill Jews because they are Jews,” he said. “They just do not want us here, so our answer to terrorist knives should be and hopefully will be raising more and more Jews from the Ukraine and all over the Diaspora to settle and settle all Israel.”