Analysis: Army generals no longer immune to criticism from politicians

As Israel celebrates its 68th year of existence, the IDF - once a unifying force among the fractious segments of Israeli society - has become a political football. 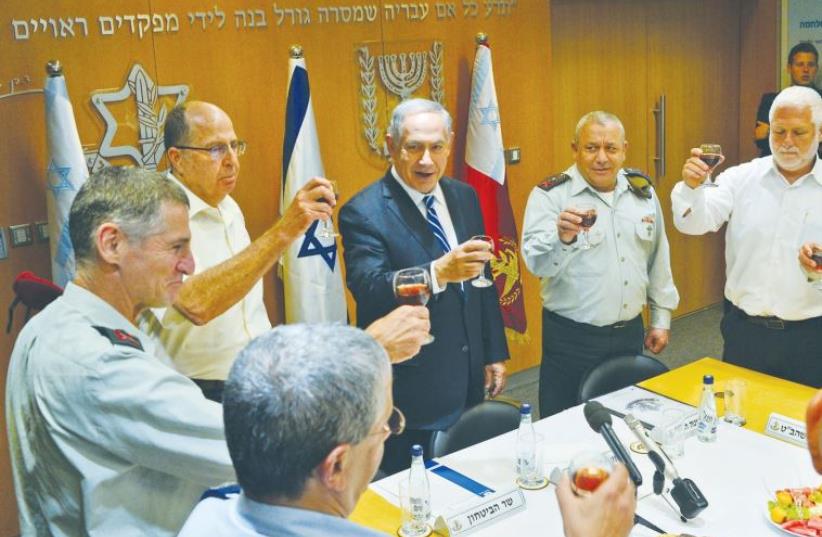 Prime Minister Benjamin Netanyahu, Defense Minister Moshe Ya'alon, and the IDF General Staff raise an Independence Day toast in Tel Aviv
(photo credit: GPO)
Advertisement
The times before Israel’s Independence Day are usually typified with sugar-coated phrases, artificial efforts to show unity, reconciliatory tone and attempts to heal the rifts between various sectors of society.Usually towering above all is the embracement of what is probably the only thing that can still glue the cracks together – the IDF.That’s not the case this year, however, as Israel celebrates its 68th year of existence.A series of army-related incidents have tainted the atmosphere and shown the division among Israelis and how politicians, including government ministers, do not hesitate to incite against the senior echelon of the IDF if it suits their narrow political agenda.The incidents also manifest the growing wedge between the security establishment and the government led by Prime Minister Benjamin Netanyahu when it comes to questions of democratic values, military ethics and code of conduct, and wartime responsibilities.It began with the unprecedented vociferous debate about the unlawful and unnecessary shooting of a Palestinian by a soldier who arrived at the scene 11 minutes after it was all over who fired at and killed the wounded terrorist.Chief of Staff Lt.-Gen. Gadi Eisenkot rushed to condemn the killing and an IDF prosecutor indicted him, first for murder but later changed the indictment to manslaughter and conduct unbecoming.Right-wing politicians criticized Eisenkot and the decision and began a social-media campaign to release him. Defense Minister Moshe Ya’alon defended the military and asked the rhetorical question: Do we obey the rule of law and military ethics or do we decline into a regime dominated by gangs? Netanyahu, for a while, sat on the fence waiting to see where the winds blew before reluctantly expressing half-hearted support for the IDF while at the same time calling the soldier’s father to express his sympathy.The second controversial incident was when Deputy Chief of Staff Maj.-Gen. Yair Golan delivered a speech at a traditional state ceremony to mark Holocaust Remembrance Day in which he compared some of the trends in Israeli society – hinting about intolerance, hatred, incitement and racism – to Germany in the 30s and 40s and was immediately bombarded with condemnations from right-wing ministers led by Netanyahu.Culture and Sports Minister Miri Regev went a step further, calling for him to be fired, though Center and left-wing politicians rushed to back him, claiming that he was speaking the truth.Golan might have been more careful in choosing his metaphors and comparison, but his speech also proved that Israeli politicians who lack style understatement perceive themselves as actors in social media and not responsible leaders.But these two cases served only as foreplay to the real thing – the bad blood and spin surrounding the forthcoming report by the state comptroller about the 2014 Gaza war.A leak of a draft of the report claimed it would be harsh on Netanyahu, Ya’alon and then Chief of Staff Lt.-Gen. Benny Gantz over their preparations for the threat of Hamas tunnels in Gaza and for not properly informing the cabinet about the situation.Opposition leaders and critics of Netanyahu used the occasion to demand explanations, and even the resignation of the prime minister for his failure.While Ya’alon and Gantz kept silent, Netanyahu’s circles began spreading comment ranging from: “The state comptroller was not a significant person” to hinting that the prime minister did raise concerns about the tunnels to finger pointing that it was a failure of the generals.One can only wonder what will happen in a few weeks when the genuine and full report is published if this is the reaction to a leaked draft, the authenticity of which is questionable.These are just some of the signs, as the country prepares to celebrate another birthday milestone, of the inability of Israelis to find common ground and consensus about their most crucial issues of war and peace and how to jointly advance the country toward a better future.