Analysis: Kerry defensive over US leverage in Syria talks

Kerry’s threat of the existence of a US ‘Plan B’ for Syria if negotiations fail is only as powerful as it is believable. 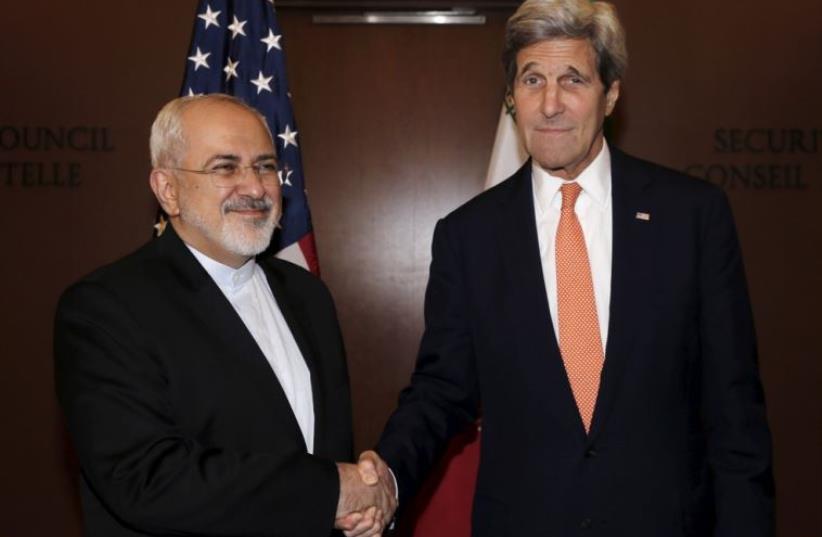 US Secretary of State John Kerry (R) meets with Iran's Foreign Minister Mohammad Javad Zarif at UN headquarters in New York
(photo credit: REUTERS)
Advertisement
VIENNA – US Secretary of State John Kerry found himself on the defensive on Tuesday outlining his definition of diplomatic leverage: The Obama administration has influence in its efforts to end Syria’s bloody civil war, he said, but that leverage is in its relationships with Russia and Iran.The secretary was addressing reporters after a meeting of the International Syria Support Group here in Vienna, where ministers from 17 nations agreed on the pressing need to increase aid to tens of thousands of besieged and starving Syrians.But the ISSG made no progress on the fundamental challenge prolonging the five-year-old civil war: “A variety of competing interests are going to have to be reconciled,” Kerry said, perhaps stating the obvious, yet outlining no clear path forward toward actualizing that goal.Under a certain light, Kerry’s statement on leverage is an acknowledgment of a basic reality in the Syrian conflict: Moscow and Tehran are the two greatest supporters of nominal Syrian President Bashar Assad, and remain the only two powers with influence over the strongman.Indeed, as a general matter, leverage over Assad exists. The question is whether Washington has enough leverage over Russia and Iran to convince them to reconcile their interests in Syria with those opposed to Assad.Russia plainly rejected on Tuesday the notion that it uniquely supports Assad: “We don’t protect someone personally,” said its foreign minister, Sergei Lavrov. “We support the fight against terrorism.”But the war in Syria began well before the rise of organizations such as Islamic State and the al-Nusra Front– groups internationally characterized as terrorist organizations, which metastasized in Syria’s power vacuum as the war intensified. It is the rebellion against Assad that Moscow opposes, because the Russian government opposes democratic protests against state structures.Kerry did not outline how the Obama administration’s relationships with either Russia or Iran will expedite an end to the Syrian war – but he did explicitly warn Assad against concluding the Obama administration is unwilling to act should diplomacy fail.It would be “dangerous,” Kerry asserted, for Assad to draw such a conclusion – because US President Barack Obama is willing to act when action is called for.Kerry’s threat of the existence of a US ‘Plan B’ for Syria if negotiations fail is only as powerful as it is believable.Assad’s perspective on that is truly unique: He is the one man who has been threatened directly by the Obama administration with the use of military force, in August of 2014, which never came to pass.