The yearlong review was written by Larry Heinzerling, an adjunct assistant professor at the Columbia Graduate School of Journalism and retired AP deputy international editor. 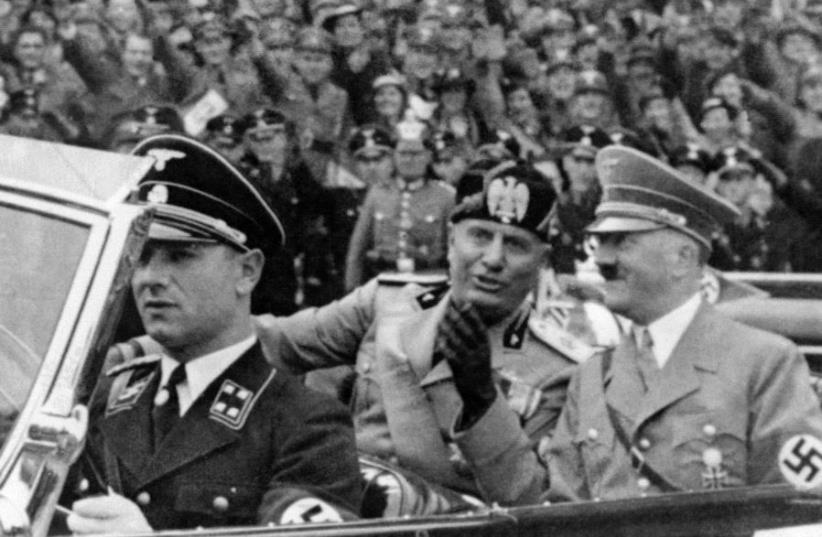 A picture taken in September 1937, in Munich, shows German Chancellor Adolf Hitler (R) riding in a car with Italian dictator Benito Mussolini while the crowd gives the fascist salute.
(photo credit: SNEP / AFP)
Advertisement
An in-house review by The Associated Press concluded that its staff did not help the Nazis or their cause during World War II.The review, whose results were published Wednesday, was a response to a German historian’s claims that the Nazis supplied American newspapers with censored material in the 1930s through an AP photo subsidiary under the control of the Ministry of Propaganda.The review acknowledged that German staff members clashed with  propaganda officials, “with some doing a better job of resisting Nazi demands than others,” and that AP paid the salaries of several photo service employees who were drafted into propaganda units covering the fighting.But given the restrictions of operating under the totalitarian regime, the AP acted as “forthrightly and independently as possible,” according to the review.“We recognize that AP should have done some things differently during this period, for example protesting when AP photos were exploited by the Nazis for propaganda within Germany and refusing to employ German photographers with active political affiliations and loyalties,” the report says.“However, suggestions that AP at any point sought to help the Nazis or their heinous cause are simply wrong. Due in large part to the AP’s aggressive reporting, the dangers of the Nazis’ ambitions for domination in Europe and its brutal treatment of its opponents were revealed to the wider world.”The report also acknowledges that in late 1935, the AP’s bureau submitted to an anti-Semitic edict by firing six employees considered Jewish by the Nazis.“The AP made the difficult decision to comply because it believed it was critical for AP to remain in Germany and gather news and photos during this crucial period,” the report said.According to the AP’s own article on the review, AP reporting in the 1930s “alerted readers in the United States to the acts of anti-Semitism and cruelty of the Nazi regime both in words and photos.”The yearlong review was written by Larry Heinzerling, an adjunct assistant professor at the Columbia Graduate School of Journalism and retired AP deputy international editor, and AP investigative researcher Randy Herschaft.