“The coin is exceptional because this is the first time that a coin of this kind has turned up in Jerusalem in a scientific dig.” 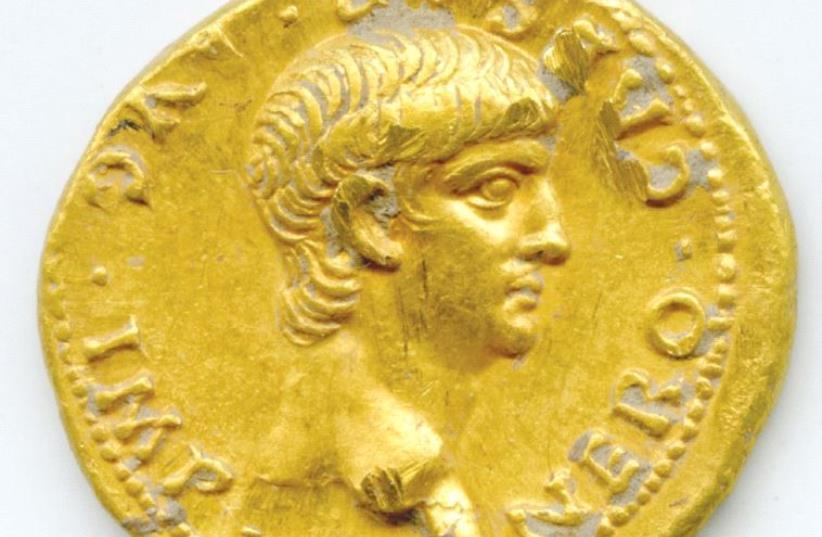 The gold coin bearing the image of Roman Emperor Nero discovered on Mount Zion
(photo credit: UNC CHARLOTTE)
Advertisement
A rare, well-preserved gold coin struck in 56-57 CE, bearing the image of Roman Emperor Nero, was found by archeologists from the University of North Carolina at Charlotte during a recent excavation on Jerusalem’s Mount Zion, just outside the Old City, it was announced Wednesday.Described as an “emperor, theater actor, poet,” Nero, a flamboyant ruler who took the throne at age 17, was perhaps best known for killing his mother, who married his great uncle Claudius.He was also notable for persecuting Christians, before taking his own life during a Roman revolt.The last of the Julio-Claudian line, Nero was emperor for 14 years (54-68 CE). He had a reputation for being a tyrant, and some believed he was responsible for the devastating fire of 64 CE that resulted in the burning of much of Rome.“The coin is exceptional because this is the first time that a coin of this kind has turned up in Jerusalem in a scientific dig,” said Dr. Shimon Gibson, who co-directed the excavation with Dr. James Tabor and Dr. Rafael Lewis.“Coins of this type are usually found only in private collections, where we don’t have clear evidence as to place of origin.”The gold coin (aureus) bears the bareheaded portrait of the young Nero as Caesar. The lettering around the edge of the coin reads: “NERO CAESAR AVG IMP.” On the reverse of the coin is a depiction of an oak wreath containing the letters “EX S C,” with the surrounding inscription “PONTIF MAX TR P III.”“Importantly, these inscriptions help to work out the date when the coin was struck as 56/57 AD,” said Gibson, noting that its identification was made by historian and numismatist Dr. David Jacobson in London.According to Gibson, the coin dates back to a little more than a decade before the destruction of Jerusalem by the Romans in 70 CE. It was found in ancient rubble outside the ruins of the first-century Jewish villas the team excavated.“The coin probably came from one of the rich 2,000-yearold Jewish dwellings which the UNC Charlotte team have been uncovering at the site,” he said. “These belonged to the priestly and aristocratic quarter, located in the Upper City of Jerusalem. Finds include the well-preserved rooms of a very large mansion, a Jewish ritual pool (mikve) and a bathroom, both with their ceilings intact.”Gibson said the team believes the large houses may have belonged to wealthy members of the priestly caste.“This mansion and others like it were utterly destroyed by Titus and the Roman legions, when Jerusalem was razed to the ground,” he said. “It is likely – owing to the intrinsic value of the gold coin – [that] it was hidden away ahead of the destruction of the city, and was missed by the marauding and looting Roman soldiers.”The image of Nero is significant in that it shows the presence of the Roman occupation and provides a clear date for the occupation of the residences, he said.While there is no historical evidence that Nero ever visited Jerusalem, Tabor said the coin is dated “to the same year of Saint Paul’s last visit to Jerusalem, which resulted in his arrest (on the charge of taking Gentiles into the Temple) and incarceration in Caesarea.”“It’s a valuable piece of personal property, and wouldn’t have been cast away like rubbish or casually dropped,” he said. “It’s conceivable that it ended up outside these structures in the chaos that happened as this area was destroyed.”Gibson said the summer dig, which recently concluded and uncovered other significant finds, will resume next year.