Money to be returned once they leave Israel. 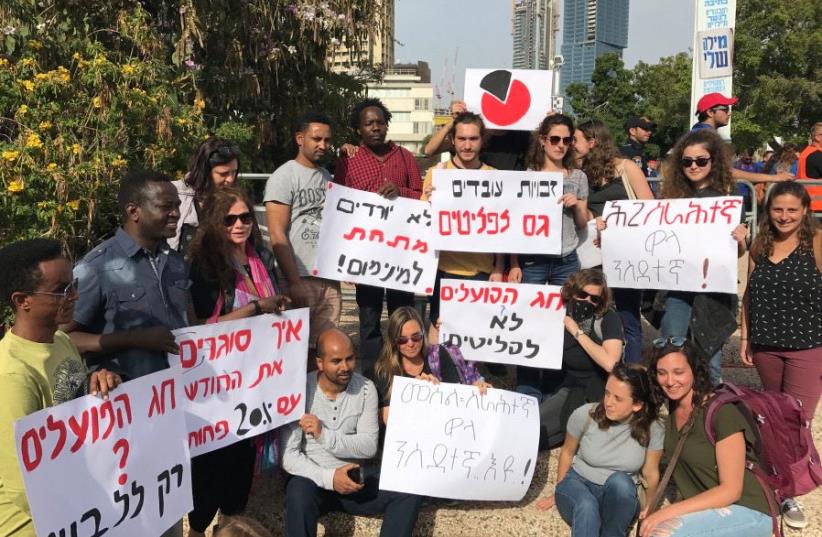 Protesters outside the Tel Aviv Museum of Art on Thursday
(photo credit: ELIYAHU KAMISHER)
Advertisement
Around 20 Israeli activists and African asylum-seekers protested in Tel Aviv on Thursday against a law, which beginning May 1 will see 20% deducted from the migrants’ salaries. The money will be returned when they leave the country.“To take 20%, some people will not have enough food, no option for apartments. For me as a single male it will not be as impactful; much more for mothers with their children,” Togod Umor Adam, 31, from Sudan said at the protest, held in front of the Tel Aviv Museum, adding, “We are being pushed into a dark corner.”Also in attendance at the demonstration were a few anti-immigrant protesters who argued with the supporters of asylum-seekers. Well-known anti-immigration activist Sheffi Paz carried a sign stating: “Why 20%? We demand 40%!” Employers will deposit the deducted wages in a fund managed by Bank Mizrahi-Tefahot.The fund was approved as part of the December 2014 amendment to the Prevention of Infiltration Law, and is now a few days from implementation after the Knesset passed an amendment in March outlining the technical details of the fund. Along with the deduction, employers are required to pay an amount equal to 16% of the employee’s salary into the fund.A coalition of human rights organizations filed a petition in March asking the High Court of Justice to strike down the law; a date for a hearing has yet to be determined.“We were hoping to receive an injunction on the law, but we received a negative decision this week without a date for the hearing,” said Sigal Rozen, policy coordinator at the Hotline for Refugees and Migrants NGO. “Lots of single mothers and handicapped people are going to be affected, the law makes no distinctions.”In the mid-2000s, Israel experienced an influx of around 40,000-50,000 African refuge- seekers, mostly from Sudan and Eritrea, many of whom now have children, who were concentrated in south Tel Aviv.The government considers these people “infiltrators” and wants to deport them whenever possible. However, many of them have now resided in Israel for more than a decade.Israel grants asylum-seekers visas that afford them a non-deportation status, but they are technically unable to work.Nevertheless, the government does not enforce a ban on employing them and does not fine employers. Asylum-seekers typically work at labor-intensive minimum wage jobs such as dishwashing and construction.Afwerri Tame, 39, from Eritrea has been in Israel for nine years and is currently unemployed after recently leaving the Holot open detention center near the Sinai border. He said the new policy would likely make it harder for him to find work and earn a living wage. “I only receive minimum wage. I need to live,” Tame said. “I hope they cancel the law.”A senior official in the Israel Restaurants Union, who spoke on the condition of anonymity, also decried the law stating, “Restaurateurs with whom we spoke expressed surprise as to why the state provides higher pension rates [the 16% addition paid into the fund] for asylum-seekers than for Israeli workers.”