“This was not a nationalist act, this was a case of a man who was mentally disturbed and did not receive treatment." 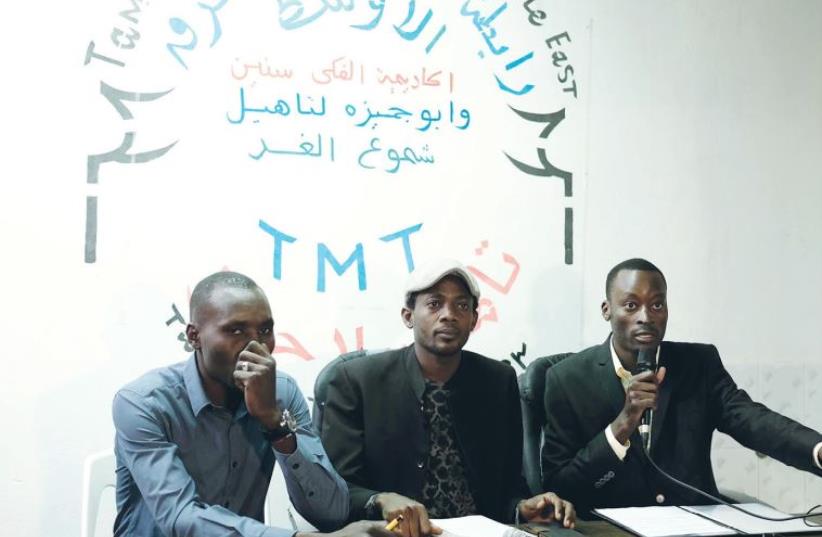 REPRESENTATIVES OF the Sudanese community speak to reporters in south Tel Aviv yesterday.
(photo credit: FLASH90)
Advertisement
The community of African refuge- seekers in Israel, and particularly those from Sudan, has been in shock since a Sudanese man stabbed a soldier in a suspected terrorist attack in Ashkelon on Sunday.That said, according to Mutasim Ali, an asylum-seeker and protest leader from Darfur, they believe the attack was not nationalistically motivated, rather the act of a man suffering from serious psychological issues.“This was not a nationalist act, this was a case of a man who was mentally disturbed and did not receive treatment. He had no political agenda and certainly did not represent our community as a whole,” Ali said.Speaking at a press conference in Tel Aviv called by asylum-seekers earlier on Monday, Ali said there is much doubt in the community about whether or not 32-yearold Sudan man Kamel Hasan carried out the attack. According to Ali, Hasan was jailed in the Holot open detention facility for illegal migrants in the Negev in April 2014, where people imprisoned with him said he was showing signs of mental illness.He also said that over the past 24 hours, a number of people have exploited the incident to besmirch the entire African migrant community, which numbers over 40,000, the vast majority of them from Sudan or Eritrea.A spokesman for the Shin Bet (Israel Security Agency) said on Monday that it had yet to determine entirely the background to the attack carried out Sunday in Ashkelon. The agency has yet to unearth any information that would indicate why Hassan carried out the attack or what his political or ideological leanings are, but the stabbing had the hallmarks of a nationalist attack, the spokesman said.A Lachish subdistrict police spokesman said much about the case is unclear – partially owing to the fact that Hassan was shot after fleeing the scene, and later died of his wounds. He added that the case does not typify the Sudanese community and that it may turn out that Hassan was mentally disturbed.The attack on Sunday took place in the morning in at a bus station near the entrance to the Neot Ashkelon neighborhood in the southern city.Witnesses said a soldier waiting for the bus was stabbed by a man who then fled while another soldier gave chase, grabbing the wounded soldier’s gun and pursuing the man into the neighborhood. The soldier shot the assailant twice, and then he and two civilians held him until police could arrive and arrest him.Hassan died in the hospital.