As part of the program, students met with Jews, Christians, Muslims, Israelis and Palestinians and also took part in role playing in debates over the future of Jerusalem. 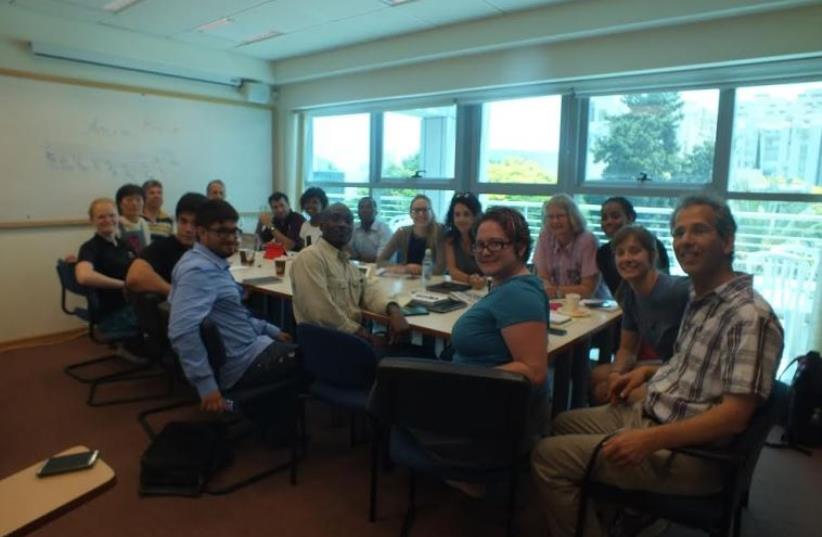 Participants in the Bar-Ilan conflict resolution course
(photo credit: BAR ILAN UNIVERSITY)
Advertisement
The country’s first identity-based conflict resolution English-language summer program is being hosted at Bar-Ilan University in Ramat Gan, open to students from around the world.The course, which began July 5 and will end July 30, is attended by students from nine different countries, including Mozambique, China, Turkey, France, Germany, Israel, Canada, the US and Peru. The course places particular emphasis on conflicts in Israel, examining them through the lens of identity.The program is being operated by the university’s graduate program in Conflict Resolution, Management and Negotiation.Prof. Jay Rothman, academic director of the program, told The Jerusalem Post that while the media often portrays the conflict in Israel as a “zero-sum, win-lose game, we are exploring it in a new way – from the bottom up, from the inside out, focusing on identity.”According to Rothman, “if we reframe this [conflict] in terms of the underlying hopes and fears, the underlying identity frameworks, we might be able to find different ways to understand and then, eventually, build new paths to peace.”The diversity of the students, who come from a wide range of backgrounds, contributes to the program in that they are able to look at the conflict from a different and new point of view, said Rothman.As part of the program, students met with Jews, Christians, Muslims, – Israelis and Palestinians – and also took part in role-playing in debates over the future of Jerusalem.“They [succeeded] in both articulating some of the antagonisms both sides feel towards each other and, I think more importantly, some of the deep felt passions and purpose that each side feels vis-à- vis this conflict over Jerusalem,” said Rothman of the program participants.In terms of the practical applications of the program, Rothman said “we now have 18 people with some very deep and complex understanding of this conflict and having people understand the complexity and express its nuance wherever they are and wherever they go, I think, can only bode well for a future with less violence and more cooperation.”“In other words,” concluded Rothman, “we’re not teaching folks to take sides, we’re teaching folks to take perspective.”According to Carlos Salaude, a student from Mozambique with a BA in international relations and diplomacy and an MA in diplomacy and business, the approach is “interesting.”“I had an external understanding of the conflict... to be here gives new perspective.”Maria Tonn, a student from the US, said before she arrived “all I had was the media to portray whatever side or whatever politics was happening. Once I got here, with the research that we’ve done so far and the experiences that we’ve had – it’s much more than that and it’s so much more complex and I’ve found that it’s not as easy as people might think.”Esther Sapi is a Jewish woman from France who works as a consultant specializing in organizational change. Her interest in the course was theoretical, in terms of conflict management, but also personal in terms of wanting to reflect on her Jewish identity and her wish to become more knowledgeable on the conflict.Sapi said she sees “solutions, not on the political level, but more on the community and on the grass roots level, which gives me hope for at least local cooperation and partnerships between Israelis and Palestinians.”The interdisciplinary program incorporates law, psychology, religion and culture into its curriculum along with seminars, workshops, simulations, guest lectures and study tours.In addition, the students take on internships at local think tanks and co-existence NGOs, such as Tonn’s internship at the Interfaith Encounter Association.“You are all in the right place at the right time to be studying conflict,” said Bar-Ilan Deputy Rector Prof. Amnon Albeck at the opening ceremony welcoming program participants. “By its very nature, the university’s [Conflict Resolution, Management and Negotiation] Graduate Program is making a great impact upon Israeli society as a result of its extensive involvement in community outreach, building an important bridge between theory and practice.“I hope that you will be ambassadors for Israel when you go back to your own countries,” Albeck concluded.