Prime Minister Benjamin Netanyahu will find a series of legal and political challenges on his return from Australia and Singapore. 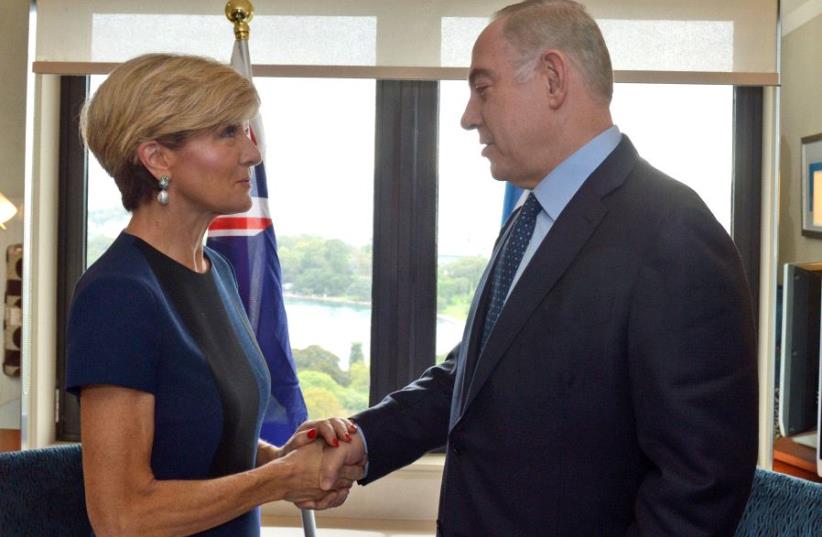 Benjamin Netanyahu meeting with Australia's Julie Bishop in February 27
(photo credit: CHAIM ZACH / GPO)
Advertisement
Aside from landing straight into an expected uproar over the comptroller’s report on the 2014 Gaza fighting, Prime Minister Benjamin Netanyahu will find a series of legal and political challenges on his return from Australia and Singapore.First, he will have to endure attempts by political rivals to tarnish his image as Mr. Security, using State Comptroller Joseph Shapira’s report on Operation Protective Edge.His rival for leader of the Right, Bayit Yehudi head Naftali Bennett, intends to showcase his own role by pressuring Netanyahu to take action against the threat of terrorist tunnels from the Gaza Strip.Yesh Atid chairman Yair Lapid also will present himself as a potential prime minister who would not have made the same mistakes as Netanyahu, while Zionist Union intends to file no-confidence motions over the report.Within the Likud, potential future party leaders are readying themselves in case Netanyahu is harmed politically by the report and criminal investigations that are intensifying.Netanyahu faces two criminal investigations – Case 1000 and Case 2000. Hebrew media have reported that police are likely to recommend indicting the prime minister in Case 1000, which alleges that he accepted illegal gifts.Meanwhile, daily leaks about the Netanyahu investigations, presumably from within the police, that flooded Israeli televisions in January have created an atmosphere of the prime minister vs the media and the police.In January, some Likud MKs accused police investigators of leftist bias, and opposition MKs, last week, shot back over a reported plan by Police Commissioner Insp.- Gen. Roni Alsheich (a Likud appointee) to take larger role in controlling investigations of politicians, by restructuring the elite investigative unit Lahav 433.Police have already recommended indicting two of Netanyahu’s former chiefs of staff – Gil Sheffer for alleged sexual assault and Ari Harow for alleged conflicts of interest.Meanwhile, Perach Lerner, former senior adviser to the prime minister, admitted to fraud and breach of trust last week as part of a plea deal with prosecutors.Right-wing lawyer Harel Arnon, who was supposed to represent the state in defending the Settlements Regulation Bill, also faces a police recommendation to indict over alleged involvement in the Harow case.Finally, Netanyahu’s personal lawyer David Shimron is at the center of a police investigation into Case 3000, which has been dubbed the “Submarine Affair.”Netanyahu has repeatedly denied any wrongdoing in Case 1000, which is based on allegations that Israeli Hollywood movie mogul Arnon Milchan gave Netanyahu and his wife, Sara, gifts worth hundreds of thousands of shekels, including cigars, champagne and jewelry. The Netanyahus have not denied accepting gifts, but reportedly have said they were given between friends in a manner that does not constitute a breach of trust or bribe.Australian billionaire James Packer is also involved in the investigation, on suspicion that he gave the premier’s elder son, Yair, lavish gifts, including free hotel rooms and flights, in order to influence his father.Yair was questioned by the police on the matter on January 17.Packer, a friend and neighbor of the Netanyahus, was conspicuously absent from the prime minister’s three-day trip to Australia.Meanwhile, Netanyahu is expected to undergo another police questioning in Case 2000, regarding an alleged attempt by Netanyahu to broker favorable media coverage with Yediot Aharonot publisher Arnon Mozes in exchange for supporting a Knesset bill to weaken competing newspaper Israel Hayom.According to a report in Haaretz last month, a decision on an indictment over Case 2000 is expected in September.Then there are cases 3000 and 4000 – the former regarding allegations that Shimron lobbied defense officials on behalf of German shipbuilder ThyssenKrupp for a multi-billion shekel submarine deal. Case 4000 is still under wraps and little is known about it.In late January, Alsheich told the press that Cases 1000 and 2000 were nearing conclusion, saying: “We already know what conclusions we have reached in the investigation.”On Sunday, however, a spokeswoman for the police’s Intelligence and Investigation Division said the probes are ongoing.“We will inform you when a decision is reached,” she said.