Netanyahu to go to London next week for Balfour Declaration centennial

The Balfour Declaration was a letter sent by then-British foreign secretary Arthur James Balfour to Lord Walter Rothschild, a leader in the British Jewish community. 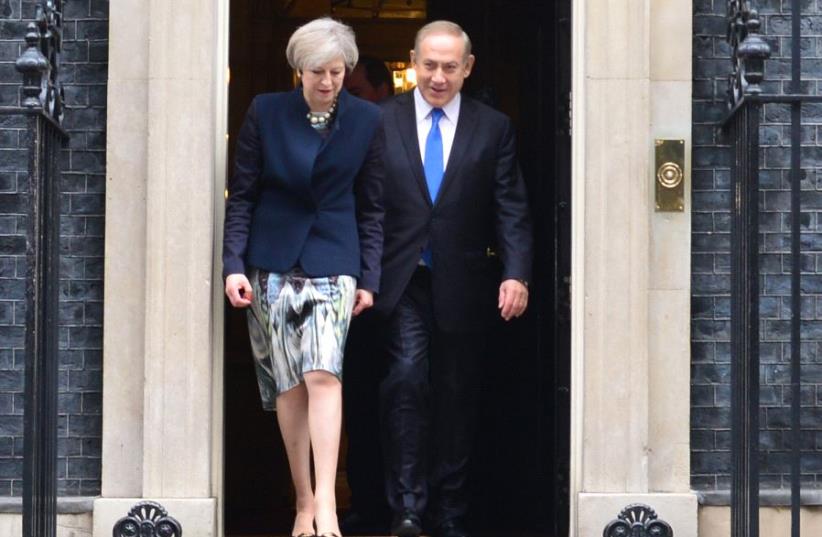 Netanyahu and May in London
(photo credit: KOBI GIDEON/GPO)
Advertisement
Prime Minister Benjamin Netanyahu will travel to London at the beginning of November to take part in events marking the 100th anniversary of the Balfour Declaration.
This will be Netanyahu’s second visit to Britain in a year after his meeting there with British Prime Minister Theresa May in February. During that meeting, the British prime minister invited Netanyahu to take part in events marking the centennial of the Balfour Declaration.
Though the itinerary of the visit has not yet been announced, Netanyahu is expected to meet with May and other senior British officials during the trip. He is tentatively set to leave on Wednesday, November 1, and return to Israel on Sunday, November 5.
May has steadfastly rejected Palestinian demands that Britain apologize for the Balfour Declaration – the seminal document issued on November 2, 1917, that helped pave the way for the establishment of Israel – saying last month the declaration was “one of the most important letters in history.”
Writing in September in a magazine published by the Conservative Friends of Israel, May wrote that the anniversary would be noted with “pride.”
In April, the British Foreign Office said it had no intention of apologizing for the document. “We are proud of our role in creating the State of Israel,” it said in a statement. “The task now is to encourage moves toward peace.”
The Balfour Declaration was a letter sent by then-British foreign secretary Arthur James Balfour to Lord Walter Rothschild, a leader in the British Jewish community.
It stated: “His Majesty’s Government view with favour the establishment in Palestine of a national home for the Jewish people, and will use their best endeavors to facilitate the achievement of this object, it being clearly understood that nothing shall be done which may prejudice the civil and religious rights of existing non-Jewish communities in Palestine or the rights and political status enjoyed by Jews in any other country.”
While not apologizing, the Foreign Office statement did add that the document “should have called for the protection of political rights of the non-Jewish communities in Palestine, particularly their right to self-determination.”
Numerous events in London, both pro and con, are scheduled in the coming days to mark the declaration’s centennial.
Meanwhile, The Jewish Chronicle reported Friday that Labour Party leader Jeremy Corbyn turned down an invitation to attend a dinner commemorating the document’s 100th anniversary.
The next day, Hamas posted a link to the article on Twitter and wrote, “Corbyn says no to dinner on celebrating the Balfour 100 in UK. UK should apologize and compensate Palestinians.”