Netanyahu is expected to undergo at least one more questioning in the investigation. 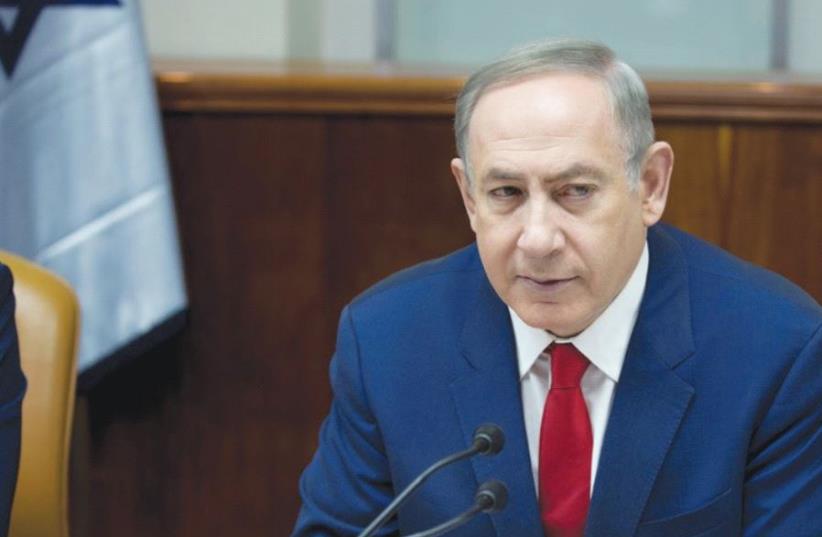 PRIME MINISTER Benjamin Netanyahu is set to meet with US President Donald Trump in less than two weeks.
(photo credit: REUTERS)
Advertisement
Police are reportedly preparing to wrap up Case 1000, which involves allegations that Prime Minister Benjamin Netanyahu accepted illegal gifts, in four to six weeks.Channel 2 reported on Friday evening that police are likely to conclude this investigation with a recommendation to indict the prime minister.This comes as Netanyahu’s testimony regarding accepting gifts from Israeli billionaire Arnon Milchan contradicts evidence collected by police investigators, Channel 2 reported on Saturday.
Benjamin Netanyahu dismissive of corruption allegations on January 2, 2017
According to the report, Netanyahu told police that he was unaware of champagne given to his wife, Sara, but testimony by Milchan and his personal assistant, among others, differs from the prime minister’s statement.According to the Friday’s report, police have decided to separate Case 1000 from other ongoing investigations and are deciding whether or not to recommend an indictment for breach of trust and for the more serious charge of accepting a bribe.While the police may recommend that the prime minister be indicted, the decision on whether to pr osecute Netanyahu is up to Attorney-General Avichai Mandelblit.Netanyahu is expected to be questioned at least once more in the investigation, according to the report. The prime minister, his wife and his son Yair have all been questioned in the probe.Defense Minister Avigdor Liberman stood by Netanyahu, saying on Saturday that the prime minister “should not resign even if an indictment is issued against him.”Netanyahu has repeatedly denied any wrongdoing in the case, which is based on allegations that Hollywood movie mogul Milchan gave Netanyahu and his wife expensive gifts worth hundreds of thousands of shekels, including cigars and champagne. The Netanyahus have not denied accepting gifts, but have reportedly said they were given between friends in a manner that does not constitute a breach of trust or bribe.“Any reasonable person knows that someone bringing their friend cigars is not a criminal offense,” attorney Yaakov Weinroth, who represents the prime minister, told the press in early January.According to a Channel 2 report on Tuesday, Netanyahu told police that his wife is an independent person and that he did not keep track of any gifts between her and Milchan.He also said he was unaware of the individual price and cumulative value of the cigars he allegedly received over a number of years from Milchan, and that he had bought many cigars with his own money.A decision on an indictment over Case 2000 will not be reached until September, according to a report in Haaretz. The case deals with an alleged attempt by Netanyahu to broker favorable media coverage with Yediot Aharonot publisher Arnon Mozes in exchange for supporting a Knesset bill to weaken competing newspaper Israel Hayom.The police probe into the “Submarine Affair” has also developed into a full-blown criminal investigation.The affair concerns allegations that Netanyahu’s personal lawyer David Shimron lobbied defense officials on behalf of German shipbuilder ThyssenKrupp for a multi-billion shekel submarine sale; Netanyahu is not a suspect in the investigation.State Attorney Shai Nitzan is expected to announce the criminal investigation, termed Case 3000 by police, in the coming days, Channel 10 reported on Wednesday. Recent testimony from former OC Israel Navy vice-admiral Ram Rothberg has allegedly substantiated suspicions, leading to the criminal investigation.Last week, it was reported that Australian billionaire James Packer was also summoned by the police to testify over gifts he allegedly gave to the Netanyahu family. Police reportedly suspected Packer of giving Yair Netanyahu lavish gifts, including free hotel rooms and flights, in order to influence his father. Yair was questioned by the police on the matter on January 17.A poll taken by pollster Mano Geve for the haredi (ultra-Orthodox) website “behadrei haderim” found that the Likud candidate with the most support to replace Netanyahu would be former minister Gideon Sa’ar.Sa’ar was supported by 42%, Public Security Minister Gilad Erdan 26%, Jerusalem mayor Nir Barkat 20%, and Transportation Minister Israel Katz 13%.Liberman, Erdan, and Katz will be speaking at The Jerusalem Post Conference in New York on May 7.Gil Hoffman and Jerusalem Post staff contributed to this report.