In April 1948, one month before Israel declared independence, Robert Kennedy traveled to Palestine to report on the conflict for the Boston Post. 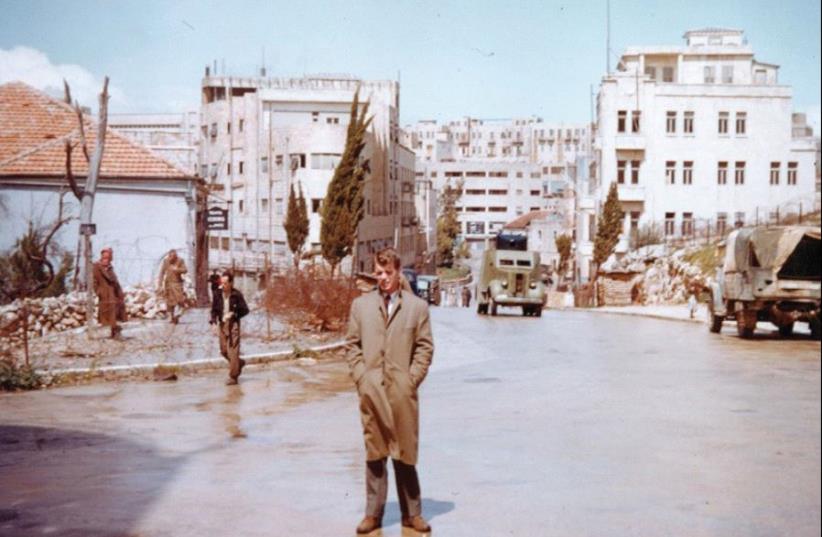 Robert F. (Bobby) Kennedy standing on Julian’s Way, Jerusalem, known today as King David Street, April 1948. Barbed wire and a British Army checkpost can be seen in the background
(photo credit: PHOTO COURTESY OF THE KENNEDY FAMILY/RFK MEMORIAL /JOHN F. KENNEDY LIBRARY)
Advertisement
The following is an excerpt from ‘American Interests in the Holy Land Revealed in Early Photographs from 1840 to 1940’ (2017) Sen. Robert F. (Bobby) Kennedy, former US attorney general and brother of slain US president John F. Kennedy, was the leading Democratic candidate for president when he was gunned down at a primary victory celebration in California on June 5, 1968. His Palestinian assassin, Sirhan Sirhan, said he killed Kennedy because of his strong and vocal support for Israel. Sirhan selected the day of his attack to correspond with the first anniversary of the Six Day War of 1967.In April 1948, one month before Israel declared independence, Robert Kennedy, then 22, traveled to Palestine to report on the conflict for the Boston Post. His four dispatches from the scene were published in June 1948. The newspaper closed in 1956, and for decades the reports were virtually forgotten. Yellow newspaper clippings of Kennedy’s articles were found by this author in a pile of discarded files in Washington DC. They were subsequently published online by the Jerusalem Center for Public Affairs.Kennedy arrived in a chaotic and dangerous land on the eve of the British departure. Jewish Jerusalem and the Jewish Quarter of the Old City were under Arab siege and regular Arab armies were pouring into the territory. The British authorities were hampering Jews’ efforts to defend themselves and were even countenancing Arab attacks against Jews.Kennedy was liberal in his praise of the Palestinian Jews (only one month later did the name “Israel” and the term “Israelis” come into being).“The Jewish people in Palestine who believe in and have been working toward this national state have become an immensely proud and determined people,” Kennedy wrote. “It is already a truly great modern example of the birth of a nation with the primary ingredients of dignity and self-respect.”One of his dispatches was headlined “Jews Make Up for Lack of Arms with Undying Spirit, Unparalleled Courage.” In one of his accounts, Kennedy described his travels with Hagana fighters in a convoy from Tel Aviv to Jerusalem.The young reporter was critical of a temporary slippage of the American government’s support for Jewish statehood. He feared that the United States was shifting towards Britain’s negative policies and its aim “to crush” the Zionist cause.“If the American people knew the true facts,” Kennedy wrote, “I am certain a more honest and forthright policy would be substituted for the benefit of all.”In his biography Robert Kennedy and His Times, historian Arthur Schlesinger, Jr. reported that during his visit to Palestine, Kennedy wrote to his parents that the Jews he met “are different from any Jews I have ever known or seen.” As for the Arabs, he wrote, “I just wish they didn’t have that oil.”Kennedy’s empathy for the Jews of Palestine was all the more remarkable considering his father’s antipathy to Jews. As related by Schlesinger, Joseph P. Kennedy, Sr. opposed the United States’ entry into the war against Germany, and in the summer of 1942 complained to a friend, “There is a great undercurrent of dissatisfaction with the appointment of so many Jews in high places in Washington.”In the midst of the conflict, young Robert Kennedy expressed an amazing optimism in his articles.“The Arabs in command believe that eventually victory must be theirs. It is against all law and nature that this Jewish state should exist... The Jews believe that in a few more years, if a Jewish state is formed, it will be the only stabilizing factor remaining in the Near and Middle East... In many cases Jews and Arabs work side by side in the fields and orange groves outside of Tel Aviv. Perhaps these Jews and Arabs are making a greater contribution to the future peace in Palestine than are those who carry guns.”