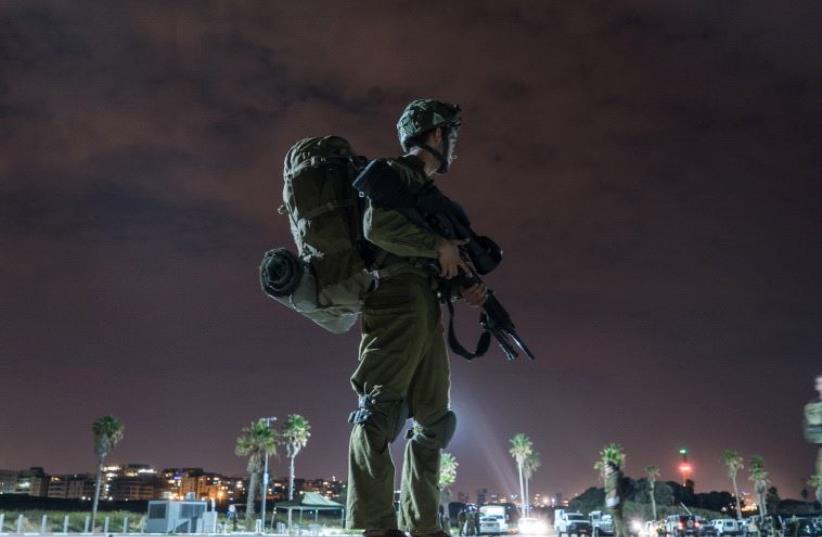 An IDF soldier.
(photo credit: IDF SPOKESPERSON'S UNIT)
Advertisement
The Ministerial Legislative Committee on Monday approved a Defense Ministry bill to award IDF reservists with increased benefits. The bill, proposed by Deputy Defense Minister Eli Ben-Dahan with the support of Defense Minister Avigdor Liberman, would provide a number of enhancements to reservists both on active duty and in civilian life.Among the decisions approved by the ministers was to give reservist commanders compensation equal to one and a half tax credits, increased compensation for legal aid for reservists facing dismissal from their jobs, and increased compensation for self-employed reservists.As part of the bill, reservists working in the civil service would have their leadership experience recognized and get preference for management positions. The bill would also extend the legal deadlines on payments to the government if a reservist is called up for an emergency situation such as a war.Reserve soldiers would also receive increased discounts and preference when looking to rent or buy government housing.Liberman said during the meeting that the decisions made are “proof that the importance we attribute to reservists is not only symbolic. The benefits we bring concern not only the reservists themselves, but also their spouses and families,” Liberman said, adding that “we are aware that it’s not only the reservist who is called up, but the entire family, even the grandmother.”While men account for 84 percent of reservists, the number of women serving in the reserves has increased over the years. According to the army, parents accounted for 40.5 percent of the total number of reservists who served more than three days in 2015, more than their counterparts with no children.Lieberman noted that since 2011 the committee had met only once on the issue, despite it being determined that the committee should convene once a year.“It’s an irregular condition which indicates that proper attention to the matter and it’s importance was not realized until today,” he said, adding that “I’m going to change that and convene the committee even beyond in order to monitor the implementation of the decisions and ensure that reserve soldiers actually receive the benefits they deserve for their great contribution to the state.”Last December lawmakers approved several benefits for reservists who are studying, allowing them special examination dates, or alternatively, to allow them to take their certification exams in fields such as medicine, accounting, pharmacy, law at a later date.They also raised the stipend by 50 percent for reservists who volunteer with the Perach program, where they receive either a scholarship or academic credits for being paired with children from low-income backgrounds.Speaking to The Jerusalem Post in December, Ben-Dahan said that “Reservists are really the backbone of the army. It’s not simple for someone to just pick up and for a month at a time leave everything to serve in the reserves to protect the State of Israel.”In October, Lieberman announced that a special committee with representatives from the Defense Ministry, IDF, Finance Ministry and the National Insurance Institute had approved a budget of NIS 30 million to increase reimbursement payments to self-employed IDF reservists.