31-year-old Lionel Kalles has been told his Hebrew is too weak to join the army. 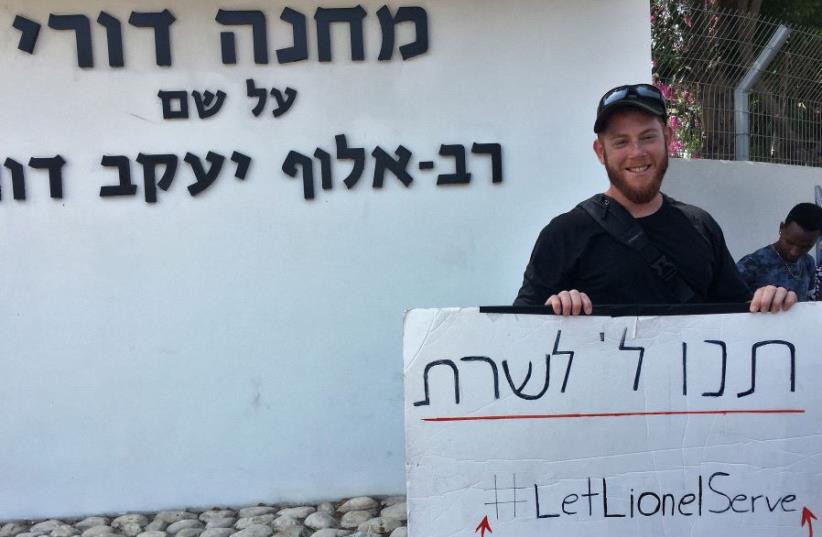 31 year old Lionel Kalles is standing outside the IDF induction center in Ramat Gan with a sign calling on the army to let him serve.
(photo credit: ANNA AHRONHEIM)
Advertisement
Lionel Kalles, 31, has spent the last three weeks protesting outside IDF induction centers, demanding that the army allow him to serve.Kalles, who immigrated to Israel from Toronto last year, has been refused by the IDF to serve, even on a voluntary basis, and has spent the last two weeks protesting outside the Ramat Gan induction center, after protesting for one week outside the induction center in Jerusalem, to join the IDF as a combat soldier.On Sunday, the IDF began induction for hundreds of new combat fighters. According to data released by the army, for the July-August recruitment period, there are 379 lone soldiers, 325 of whom are new immigrants from Ethiopia, France, the US, Ukraine and Russia. Some 8% of recruits are over age 20, and the oldest recruit is 28 years old.Speaking to The Jerusalem Post on Monday, Kalles explained that he is protesting the army’s decision to refuse to allow him to serve based on his age and level of Hebrew.“I came out here [Ramat Gan induction center] because I don’t agree with their [IDF] decision,” he said, adding that the primary motivation behind his desire to serve is “the blessing that my mother gave me before she passed away last year: to go to Israel and serve in the IDF.”Last year, the IDF stopped drafting new immigrants aged 22 to 26, but allows male immigrants of that age group to volunteer.In the past, men of that age group who made aliya were required to serve a minimum of six months, and women who immigrated were exempt from service if they were over the age of 20.“I’ve wanted to join the army since I was young,” he told the Post, adding that extenuating circumstances prevented him from serving until now.“My reasons for not serving in the IDF earlier in life was due to my responsibility to my own family, and despite that, I came close several times,” he wrote on his Facebook page, “Let Lionel Serve,” which has close to 400 followers.“Now, I have the ability and an even greater desire to take part in the responsibility of a much larger family – the Jewish people and the country of Israel. My life circumstances have changed and I am now able to focus on this with all my energy.”Kalles’s case has similarities with that of 34-year-old French immigrant Yoni Zarka, who for months sent emails, called the army on a daily basis, posted messages on the IDF Facebook page and slept outside the IDF induction center in Ramat Gan.Zarka’s efforts paid off and in 2017, he became a Border Police officer.But according to a senior IDF officer familiar with Kalles’s case, Zarka’s level of Hebrew was much stronger than that of Kalles, adding that Kalles’s age poses a major obstacle “both to him as a soldier and his commanders.”“It’s a challenge to send a 31-year-old man to be a combat soldier, especially if his commander is 19 years old,” he told the Post, explaining that the mentality of the younger soldiers will be a challenge for Kalles.According to the senior officer, Kalles has had two interviews with the IDF and has been informed that in another two months the army “will see where he stands” in terms of the level of his Hebrew.“When you are an oleh, there is a minimum amount of Hebrew you need. If you don’t know basic Hebrew, you won’t get into the army,” the officer said.According to Kalles, he attended Ulpan Etzion for five months and has continued to work on his grasp of the language by speaking to soldiers as he protests.“My health and physical fitness are fine, but they [IDF] told me that my Hebrew isn’t good enough,” he said, adding that he will be happy to be called “sabba gingy” (grandpa redhead) as long as he can join the ranks of the IDF.