“We must remember the concept that ‘the poor of your city come first’ and that there are in the State of Israel many people who we need to pay attention to.”

By JEREMY SHARON
JANUARY 30, 2018 22:31
An African migrant holds an Israeli flag after being released from Holot detention centre in Israel's southern Negev desert August 25, 2015.
(photo credit: REUTERS/AMIR COHEN)
Advertisement
Chief Rabbi David Lau has said that he backs the deportation of single, male African asylum-seekers, basing his stance on a principal in Jewish thought which states that one must look after one’s own poor before others.Lau also insisted that those who face deportation are migrant workers and not refugees.There are approximately 35,000 asylum-seekers from Eritrea and Sudan in Israel, many of whom claim to be fleeing persecution and life-endangering situations in their home countries.The state is now set to embark on a policy in which migrants are offered $3,500 to move to a third country, and working age, single men face jail if they refuse.“We must remember the concept that ‘the poor of your city come first’ and that there are in the State of Israel many people that we need to pay attention to,” Lau said in an interview with Ynet on Monday.“I am talking about the disabled who we do not always succeed in helping, about Holocaust survivors some of whom live in disgraceful circumstance, and I’m talking about the residents of south Tel Aviv,” he continued, in reference to the low socioeconomic status of residents of south Tel Aviv where many African asylum-seekers reside. 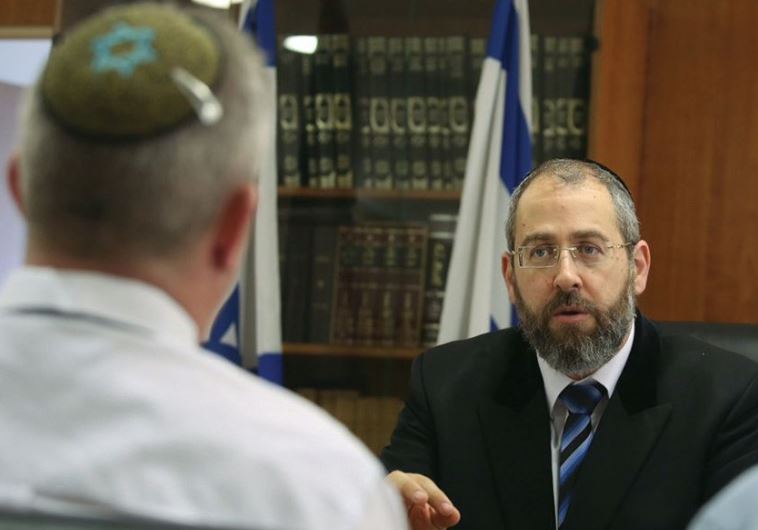 Ashkenazi Chief Rabbi David Lau speaks to The Jerusalem Post (Marc Israel Sellem/The Jerusalem Post)The chief rabbi also said that a distinction needs to be made between refugees and migrant workers.“I distinguish between refugees – people whose lives would be endangered if they would be returned, God forbid... the State of Israel needs to do everything [for them]... We need to accept and help refugees, for sure,” he said, mentioning the medical help that Israel has given to Syrians harmed in the Syrian civil war.But he insisted that the young, single men who the state intends to deport are migrant workers and that the state is within its rights to expel them, specifically citing the fact that over six thousand applications have been rejected or closed and only 11 accepted.Despite these claims, activist groups campaigning for African asylum-seekers point out that the reason so many applications were rejected was because the majority of them were Eritreans who said their reason for fleeing Eritrea was their indefinite period of army service.IN 2017, THE FREEDOM HOUSE think tank ranked Eritrea as the joint-second worst country in the world for political rights and civil liberties, one ahead of Syria and tied with North Korea.It has mandatory conscription for its citizens, but the period of service is not limited and can extend for over a decade. It has been compared to a form of slavery since many conscripts are forced to work in the non-military sector for insufficient pay on construction and agriculture projects, and sometimes for the personal benefit of commanders.In 2015, 89.8% of Eritreans who applied for asylum in the European Union were accepted because of the country’s human rights record. An Israeli court ruled, however, that fleeing from the indefinite military service was not grounds for asylum.Most of the asylum requests that have been rejected were submitted by Eritrean citizens, while the state has not responded to almost all asylum requests submitted by Sudanese asylum-seekers, many of whom are from Darfur, says Sigal Rozin of the Hotline for Refugees and Migrants.She speculates that the state does not want to process asylum requests of Darfurians since it is widely known that genocide took place there in the mid-2000s and that those who fled had good grounds to do so.Besides the over 6,500 applications that were rejected or closed, there are another 8,500 which have not been answered.Other asylum-seekers have not formally submitted requests for refugee status since this option was unavailable until 2013, and then was only made available to those who submitted their requests within a year of arriving.Since most of the asylum-seekers arrived in the mid-to-late 2000s and early 2010s, this prevented them from applying for asylum, although the Hotline successfully challenged this policy in 2017, when the High Court said it must process all applications regardless of when the applicant arrived.Rozin said she was saddened that Lau had been influenced by erroneous information put out by the Interior Ministry.“The survivors of the slavery of the Eritrean dictatorship are recognized as refugees in the whole of the Western world,” she said.“It is unclear how the government of Israel succeeds in convincing the Israeli public that the Eritreans coming to Israel are migrant workers, just because they are young and single.”