Civil marriage in Eilat to be proposed in forthcoming legislation

The bill would allow civil marriages to place in Eilat, but is facing opposition from all sides. 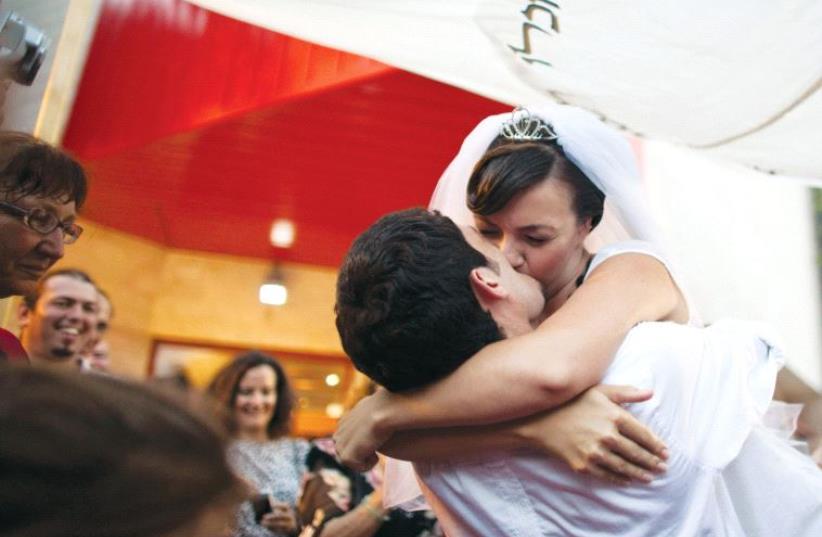 A bride and groom kiss under the chuppah at their wedding
(photo credit: NIR ELIAS / REUTERS)
Advertisement
Fly to Cyprus, soak up some sun, swim in the sparkling clear turquoise waters the island boasts, and have a civil wedding ceremony. That’s what 3,626 Israeli couples did last year, while close to 6,000 more married in different locations, the majority of whom also wed in civil ceremonies.Why? Because civil marriage is not an option in the Jewish state.Zionist Union MK Ksenia Svetlova is now seeking a solution which she thinks may face less opposition from religious politicians and leaders, and is advancing a bill in the Knesset that would allow civil marriages to take place in Eilat.So the format could remain very similar; catch some rays, have a swim and a snorkel in the Red Sea and get hitched.Currently, the only form of marriage available in the country is religious marriage performed by the established religious authorities of the various religious communities.Civil marriages performed abroad, however, and then registered in Israel, are recognized by the state.Despite this de facto recognition, civil marriage in Israel remains an extremely contentious issue, since religious leaders oppose it fiercely on the grounds that it would give state sanction to intermarriage between Jews and non-Jews.Secular campaigners argue, however, that the lack of an option for civil marriage is a severe restriction on a citizen’s civil liberties and is a blemish on the country’s democracy.There are as many as 660,000 Israelis who are totally unable to wed in Israel because of the lack of civil marriage.This includes more than 360,000 immigrants from the former Soviet Union who are not Jewish according to Jewish law and are classified as “without religion.” This means they cannot marry anyone at all who is registered in the population registry as being of any religion.And more than 280,000 Israeli gays and lesbians are also unable to marry, along with 13,000 non-Orthodox Jewish converts and 5,000 people ineligible for Jewish marriage for various reasons of Jewish law.Another 400,000 people, including divorced people and kohanim, members of the priestly line, also face restrictions in getting married.“Israeli citizens must be afforded the right to choose for themselves their lifestyle and specifically to realize their democratic and universal right to marry in a civil ceremony in Israel, and emphasize the democratic and liberal character of the State of Israel,” says Svetlova, who herself married in a civil ceremony in the Seychelles in 2017.She acknowledges, however, the status quo on religion and state issues, which precludes civil marriage, and therefore proposes to allow civil marriage only in Eilat in her legislation, so as to do as little injury as possible to the status quo.The MK also argues that this would help redirect the funds and resources spent by Israelis abroad to the Israeli economy, and Eilat in particular, which would receive a significant economic boost from the initiative.Despite Svetolva’s efforts, it would appear that this legislation has little chance of being passed into law, since the religious parties will likely oppose it because civil marriage is such anathema to them.But the bill also faces opposition from a more surprising direction, the Israel Be Free secularist organization, which argues that sending people to Eilat for civil marriage is no different from sending them to Cyprus.Inbar Oren, deputy director of Israel Be Free, argued that the goal of civil marriage is symbolic of the struggle for religious freedom in the country, and that common law partnerships which are recognized in Israel afford couples the same rights as married couples and is already a form of civil marriage.As such, she opposes a geographic solution to the civil marriage conundrum as proposed by Svetlova.“The fact that we can’t marry where we live, where everyone else can get married, is symbolic, and people want to change that symbolism everywhere, not just in one small corner of the country near the border,” she said.“We need to aim for the right of everyone to get married how they want, where they want, not for a weird solution to this situation.”