Comment: Reza Aslan goes inside the world of haredim in Israel, with his own agenda in mind. 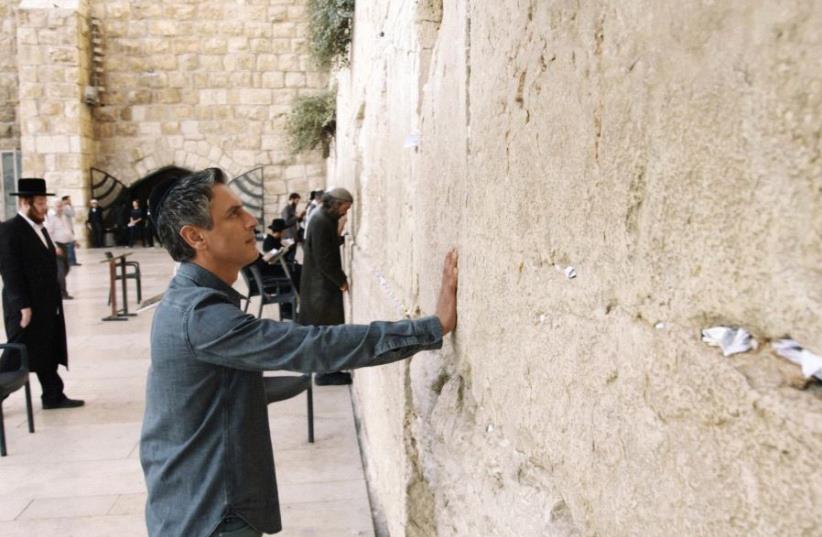 REZA ASLAN, host of CNN’s series ‘Believer,’ stands at the Western Wall in 2015 during the filming of an episode in Israel.
(photo credit: CNN)
Advertisement
When Reza Aslan, a Muslim- American TV host, author and theologian, arrived in Jerusalem, he was ready to shine a light on the intractable, messy and long-simmering conflict.Not the Israeli-Palestinian conflict. Aslan was in the Holy Land filming an episode of CNN’s “Believer,” focusing on the struggle between secular and ultra-Orthodox Jews. The episode aired earlier this week and generated a wide range of responses, with many criticizing Aslan’s oversimplification of the issues.It’s clear from the start that Aslan approached the story with an agenda. From the first moment, the TV host sets up the comparison on which he bases the rest of the episode: Israel today is approaching the atmosphere that led to the 1979 Iranian Revolution.
Israelis prepare for Passover 2017 in Jerusalem (REUTERS)
“Have you ever lost your country to extremists?” asks the Iranian-born Aslan at the outset of the episode.Aslan at least recognizes that he’s bound to encounter protests, noting early on that, “No matter what I say or what I do, someone’s going to get pissed off.”And so Aslan sets out to explore the lives of the ultra-Orthodox in Israel (not mentioning that several hundred thousand haredim live in the New York area as well).He walks the streets of the ultra-Orthodox Mea She’arim neighborhood in Jerusalem, saying, “I was advised not to walk around here without a local escort, as outsiders are not welcome.” And while driving around Ramat Beit Shemesh, he tells the camera that, “If we get out of the car in these neighborhoods, we will be immediately attacked.”While it’s true there are some outbursts of violent activity in both these places, Aslan’s statements are an extreme exaggeration of the immediate danger in either location on an average day.Having wandered the streets of both Mea She’arim and Ramat Beit Shemesh as a non-haredi woman, I have never once felt remotely afraid.There are also a fair amount of patronizing moments, and I don’t just mean captioning the English of Brooklynite Health Minister Ya’acov Litzman. Aslan states that the haredi lifestyle would be acceptable but for the fact that they are “voting in droves,” and asks patronizing questions of many of his subjects.Aslan touches on some serious hot-button issues: IDF service, secular studies in schools, the struggle over the Kotel and the Women of the Wall. There is no doubt among most Israelis that there are tensions between the communities. But he paints all haredim with one brush, ignoring the many divisions and differences within the populace. He makes no mention of the growing, albeit still small, number of haredi men who enlist in the IDF, nor that more than half of ultra-Orthodox men do hold jobs.Aslan adopts a different tone from his earlier episodes, one of worried outsider, finding fault with the religious way of life he is examining.Elias Muhanna, writing in The New Yorker, noted the contradictions in Aslan’s approach in this episode: “Why do renegade Scientologists get the benefit of the doubt while ultra-Orthodox Jews do not? Perhaps there is a limit to universalist tolerance, after all.”It is interesting to note that Aslan filmed in Israel in late 2015 – a lifetime ago in Israeli politics. The show makes at least one outdated claim on haredi army service. It is unclear why the show’s airing was so delayed.But perhaps the most disingenuous part of the episode is Aslan’s happy conclusion.After encountering the Na Nachs, the hippie, ultra-joyous Breslov hassidim, the TV host decides they offer the best hope for the future, a bridge between secular and religious groups in Israel.“Do you feel as though you are changing Israel from the ground up?” he asks one in the back of their van blasting music. “We’re trying,” the Breslover replies.But, as Sigal Samuel writes in The Atlantic, “A viewer who isn’t steeped in Israeli culture may walk away thinking that he actually has a shot.” The reality, she adds, is that the Na Nachs are “a tiny minority who aren’t taken seriously by either camp” – secular or religious.In his zeal to end the episode on a hopeful note, with a positive view of religion, Aslan ignores the reality of the Na Nach sect: that they number at most a couple thousand; that they have no real organization or plan to make an impact; and that they adhere to much of the same strictures Aslan disdains.At no point while riding around in their graffitied van, did he ask why there were no women involved, or why none of them seemed to have jobs to provide for their families.This isn’t the first episode of Aslan’s six-part series that has come under fire. In the opening episode of “Believer,” Aslan sat down with a group of Aghori nomads outside the Hindu holy city of Varanasi.They smear his face in cremated human ashes, and feed him a piece of human brains. Critics complained that the episode’s focus on such a fringe sect could feed into anti-Hindu sentiment.It’s clear the TV host frames each episode with his own beliefs, in this case that Israel is becoming like Iran, and that a bunch of dancing hippies are the only way to stop it.But as activist Nili Philipp told Aslan as they drove around Beit Shemesh: “No, it’s not Iran. I’m not afraid that someone’s going to arrest me in the middle of the night... the law is on my side, the courts are on my side.”