They were joined onstage for the whole concert by guest Israeli guitarist Danny Weisfeld, and throughout the night a succession of singers took to the stage for different numbers. 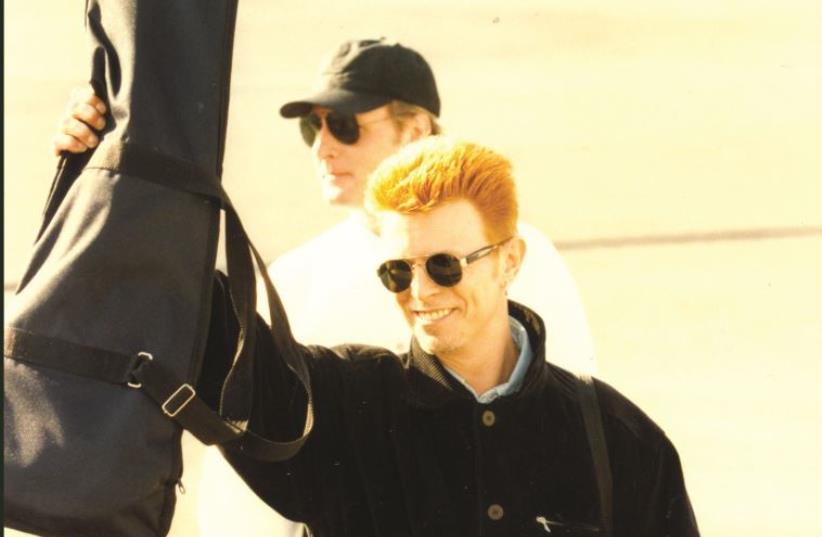 David Bowie lands in Israel for his show in July, 1996.
(photo credit: ALON RON/ISRAEL SUN)
Advertisement
To commemorate the month of David Bowie's birth and passing, January, several of his former band members gather together for a short tour to perform all of the star's major hits. To open the third annual Winter Festival, Thursday night saw the band hit the Charles Bronfman Auditorium in Tel Aviv. The band consists of legendary pianist Mike Garson, who played on over 20 of Bowie's albums, including the acclaimed piano solo on Aladdin Sane; guitarist Gerry Leonard, who played on several albums including Heathen and Reality and The Next Day bassist Carmine Rojas, who played on several of Bowie's biggest hits including "Let's Dance," "China Girl," and "Modern Love"; and drummer Alan Childs, Bowie's drummer for the 1987 global tour of Glass Spider.They were joined onstage for the whole concert by guest Israeli guitarist Danny Weisfeld. Throughout the night a succession of singers took to the stage for different numbers.Canadian singer Sass Jordan opened the show with the crunching heavy sounds of "Rebel Rebel," before British singer Simon Westbrook took the vocal reigns and did an admirable job, sounding scarily close to Bowie's unique vocals.The band was then joined by Israeli pop singer Mai Feingold for a stirring rendition of "Space Oddity" and "Five Years," before renowned Israeli bassist Yossi Fine joined Rojas on bass for a two-bassist version of Bowie's number one hit "Let's Dance" that had fans up on their feet and running to the front of the hall.The linchpin of the evening was pianist Garson, who took time out between each song to talk to the audience. Anecdotes about the songs were shared, stories were told, and he even threw some Hebrew into the mix. The assortment of anecdotes left the fans enraptured, as did the music.It was musicianship at its finest, ranging from the well-rehearsed shorter numbers to more fluid and more expansive songs, such as "Aladdin Sane."After Feingold returned for the classic "Starman," yet more special guests were invited onstage. Three young Israeli singers of the Rimon School of Music in Ramat Hasharon shared the vocals for the ever-popular yet vocally challenging "Life on Mars."  The show continued with fantastic renditions of "Ziggy Stardust," "Suffragette City," and the Bowie-penned Mott the Hoople hit, "All The Young Dudes."A rip-roaring evening of great music and brilliant musicianship concluded with the entire crowd up on their feet for a four-song encore that included "Rock and Roll Suicide" and "Heroes."As Garson said when introducing the show: “Maybe the true test of an artist is the enduring legacy of their music.”And David Bowie’s music will certainly endure.