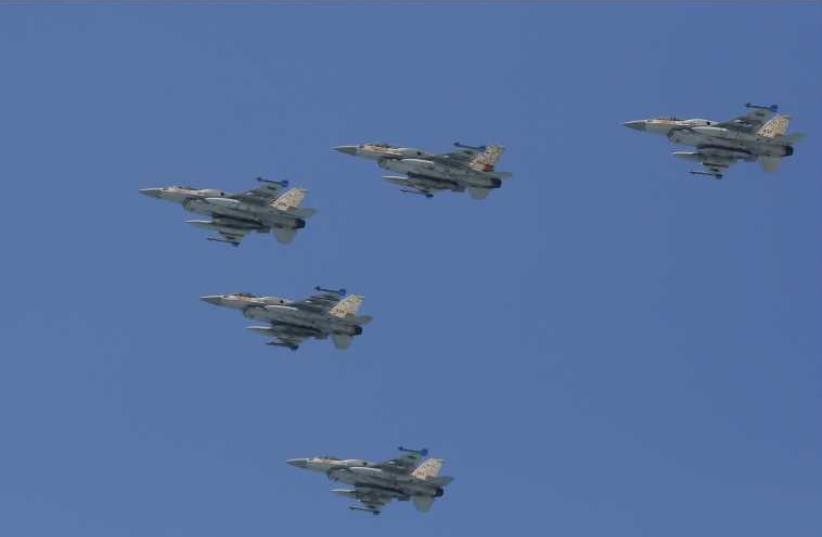 Israeli Air Force F-16 planes fly in formation over the Mediterranean Sea as seen from a Tel Aviv beach, April 23
(photo credit: REUTERS)
Advertisement
The United States gave permission to Israel to offer Croatia 12 F-16 C/D Barak fighter jets, Croatian Defense Minister Damir Krsticevic said on Sunday, denying reports that Washington doesn’t want the European country to buy the planes.“The US government has given permission to the State of Israel to offer the Israeli F-16 to Croatia and we have a document to that effect,” Krsticevic was quoted as saying by the Total Croatia news website.“In its bid, Israel undertook to deliver to Croatia aircraft that is compatible with NATO and obliged itself to ensure that the extension of the planes’ service life complies with the original manufacturer’s criteria. Delivery, too, is the responsibility of the State of Israel. Based on those documents and the tender, we made the decision on the purchase of the multipurpose fighter jets and the process was legal and transparent,” he added.On Friday, Israel’s Channel 10 reported that the Trump administration was blocking the $500 million deal that would have seen Israel sell 12 aging F-16 C/D Barak fighter jets to Croatia.According to the report, which quoted unnamed Israeli officials, Washington is angry that Israel added advanced Israeli-made electronic systems to the planes, giving Jerusalem an edge over American planes and therefore unfairly profiting from the deal.The report said that Prime Minister Benjamin Netanyahu discussed the issue with US Secretary of State Mike Pompeo last week, who reportedly told Netanyahu: “I’m in favor, but Defense Secretary [James] Mattis is against [the sale]; it’s him who is blocking it.”Croatia was also reportedly “furious” about the holdup of the sale of the jets which were to replace their fleet of 12 Soviet-designed Mikoyan MiG-21 fighter jets and be delivered by late 2020. According to local press, the jets will be called Flash and Storm after the two Croatian military operations against Serbia in 1995.According to Krsticevic, Croatia will not pay any additional costs for the purchase of the jets, which Washington is insisting should be returned to the form in which they were sold to Israel – without the advanced electronic systems.“The tender is clear. The tender has been transparent and in line with laws. We know what we have asked for. The bids were opened publicly. The price is known. As far as Croatia is concerned, there are no additional costs,” he said.Balkan Investigative Reporting Network on Friday quoted the US Embassy in Zagreb as saying that Washington has been actively working with Israel and Croatia on the details of the deal over the past year.“We have been working with Israel for over a year on the details of the proposed F-16 transfer. Over the course of our discussions, we have been consistent and clear about the technical conditions under which we could approve the transfer,” the US Embassy was quoted by BIRN as saying, adding: “The United States remains firmly committed to supporting Croatia’s desire to modernize and upgrade its air force by purchasing aircraft that are interoperable with its NATO allies.”