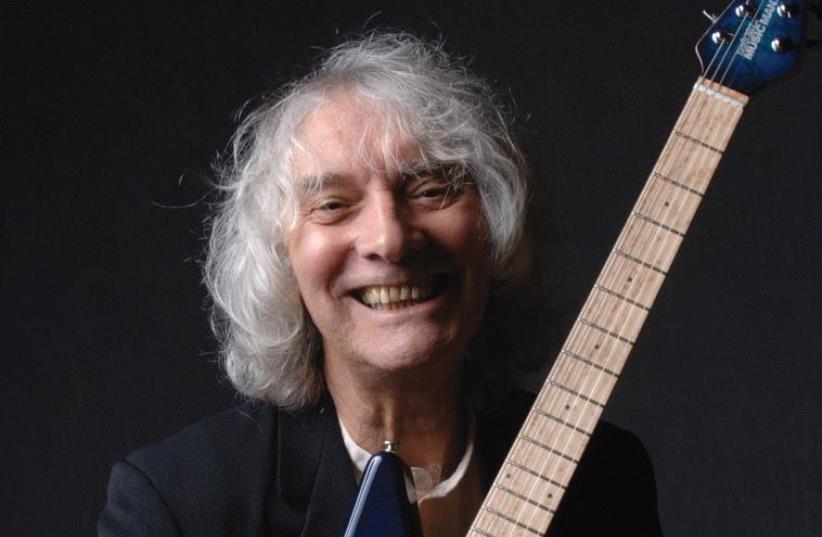 BRITISH MUSICIAN Albert Lee is regarded by many as one of the world’s finest guitar players, with a career spanning more than 50 years.
(photo credit: Courtesy)
Advertisement
Albert Lee is one of the few musicians who can start off a sentence with “George [Harrison] and I used to play together at Eric’s [Clapton] house” and not have it sound like a brag.The 71-year-old, silver-haired guitarist is the unsung link between the British bluesbased electric guitar of Clapton and Jimmy Page, the country twang of Buck Owens and the seminal alt-country lilt of Emmylou Harris and Gram Parsons. And even though he’s spent his 50-year career in the support role for his more headline-worthy friends, Lee is secure in his place as one of the most accomplished guitarists of his generation.The quintessential “guitarist’s guitarist,” Lee emerged in his native England out of the same skiffle craze that spawned The Beatles. Schooled in the blues, country and the early rock & roll of Buddy Holly and Chuck Berry, a teenage Lee joined the British blues and r&b burners Chris Farlowe and The Thunderbirds in the early 1960s, but his heart was overtaken by the pure country sounds coming out of the US. And after a stint in one of the first English country rock bands – Head, Hands and Feet – in the late ’60s, he followed his heart to California.Lee’s reputation as a lightning-fast finger- picking guitar hero led to work on albums with Bo Diddley, Jerry Lee Lewis and, after relocating to the US in the early 1970s, a position in Holly’s famed backup band The Crickets. Lee’s stature soared when he was asked in 1976 by Harris to replace Elvis Presley’s guitarist James Burton in her Hot Band, the group she formed following the death of her singing partner Gram Parsons. After five albums with Harris that also saw the release in 1978 of his first solo album, Lee joined Clapton’s band for the next few years as Slowhand’s righthand man. His studio work throughout the ’80s reads like a who’s who of alt-country, with collaborations with Rosanne Cash, Dave Edmunds, Rodney Crowell, Nanci Griffith and Carlene Carter, among others.Despite releasing many albums under his own name, Lee’s solo career never really took off. But one of his songs, “Country Boy,” proved to be a blueprint for future country guitar players and later became a hit for Ricky Skaggs.Looking a little like a more disheveled Harpo Marx, the white-haired Lee exudes a sense of serenity and self-effacing graciousness that was evident in the DVD of A Concert for George, the 2002 star-studded tribute to Harrison at the Royal Albert Hall on the first anniversary of his death.While his more famous colleagues stood in the spotlight with their solos, Lee blended into the ensemble playing, looking like he was having the time of his life while providing inspired fills and licks.The Jerusalem Post caught up with Lee as he was packing in his Los Angeles home for a month-long tour with his four-piece band that will see him perform in Tel Aviv tonight at Reading 3 at the Tel Aviv port.

You’re a British musician who has been living in California since the mid-1970s – how did that come about?I first came to California because of the musical opportunities. At that time in the early to mid-’70s in England, the big thing at the time were bands like Yes, Led Zeppelin and lots of hard rock and progressive rock. I was really into the country rock coming out of America – Emmylou Harris, the Flying Burrito Brothers, The Byrds. I had a limited audience in England – my style of guitar playing on the whole was more appreciated in the US than in England, so I came over here and was lucky enough to fall into the thriving scene, that was exploding.After I got the gig with Emmylou Harris, I realized that it was time to stay.

Where did that love of country music come from?Well, we all started out playing skiffle music – Lennon & McCartney, Clapton, Jimmy Page – we all played in skiffle groups with acoustic guitars. But we all listened to US radio and all the great rock & roll records that were coming out and we all ended up switching to electric guitar.In the ’60s, I was playing in a good, rocking r&b band with a popular British musician named Chris Farlowe, but at the same time, I was buying Buck Owens and George Jones records, so I had pretty mixed interest in what I wanted to listen to and play.In fact, I put together a good little country band in the late ’60s in England, but I soon realized that I wasn’t going to be able to make a living doing that. Then I joined a band called Heads, Hands and Feet and that was the band that brought me to America for the first time.

What were the years [1976-78] like playing with Emmylou Harris and her Hot Band?You replaced James Burton, Elvis Presley’s guitarist, right? Yes, I took over from James, and for a while I had to play what James had played until they got used to me and then I was able to be myself. But James was a real hero of mine and we’re good friends and still play occasionally together.I really enjoyed my time with Emmylou and we also still do projects together. I just sat in with her and Rodney Crowell on their tour.It must have been quite a change to go from the country of Harris to the electric blues of Eric Clapton, whose band you joined in 1978.It’s all part of the same kind of music.It’s interesting how that came about; I was doing a session with Eric for another artist, Marc Benno [who used to play with Leon Russell]. At the end of the week, Eric and his manager came to me and asked “would you like come on the road with us?” Eric was working without a second guitar at the time, and for me it was a great opportunity. I had just done a solo album and had to decide what to do – put a band together of my own or go back on tour with Emmylou. But the offer from Eric was too tempting to turn down.It lasted for five years and was a good experience. Eric actually gave me lots to do. I played a little keyboards, sang a few songs, played some solos and he was happy to have me there.During that time, he fired the band twice and I managed to survive both times. But that taught me a lesson – this may not last forever.You joined Clapton for the Concert for George Harrison in 2002 – that must have been a special event.That was one of the most amazing shows I’ve ever been involved with – it was a really powerful evening. Everyone was there for George. I never played with him onstage, but we jammed in hotel rooms and at Eric’s house. We got on well and we were kindred spirits in a lot of ways.Tell me about this tour and the show you’re going to do in Tel Aviv. What should we expect? I put this band together about three years ago – it’s funny that I’ve been living in American for 40 years and never had a band until now. I had a British band that I would come over to England and tour with but this is the first time with I’m going out with my American band.I’ve got John Thomas on keyboards, Will Mcgregor on bass and Jason Harrison Smith on drums.We do everything from rock & roll to r&b and a bit of country. I do a couple ballads at the piano that go over well. We’ll play a lot of covers that most people will know – it’s a mixed bag, really.This isn’t your first visit to Israel is it? No, not at all. I was here twice with Eric, in the late ’70s and early ’80s I think. We played in Tel Aviv and Jerusalem and we had a great time. I’m sorry it’s taken me all this time get back there.This tour is a new experience for me, or at least something I haven’t done for a while.I’m not a big fan of flying with lots of gear and vintage guitars. And I have to pack for places like Norway and Israel, so I don’t know what to bring clothes-wise. So I’m a bit frazzled. But it’s going to be great.
Advertisement
Subscribe for our daily newsletter