The premiere of ‘Bake-Off Israel’ leaves many viewers looking for more. 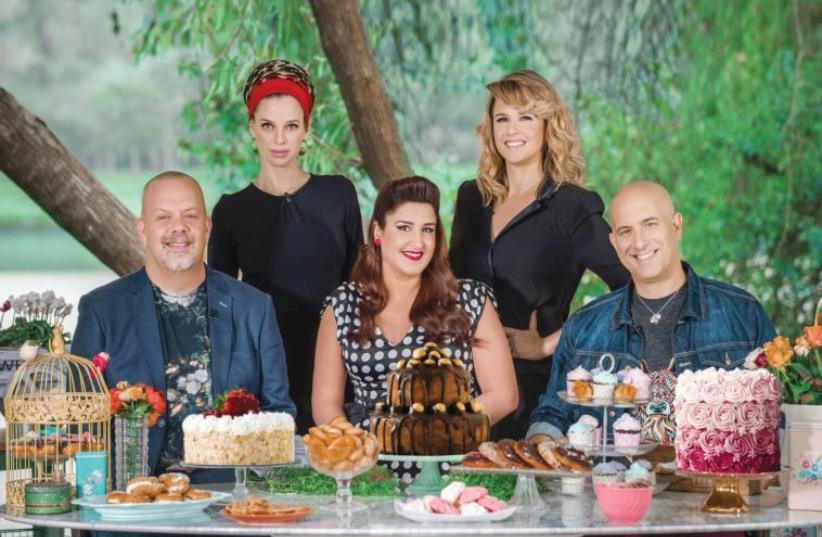 ‘BAKE-OFF ISRAEL’ judges and hosts (from left): Ran Shmueli, Aya Kremerman, Carine Goren, Paula Rosenberg and Oded Brenner.
(photo credit: Courtesy)
Advertisement
Close to a million hungry viewers tuned into the series premiere of Bake-Off Israel on Channel 2 Saturday night, but many were left with a less-than-pleasant taste in their mouths.The show, a remake of the smash British hit Great British Bake Off, was launched this past weekend with close to 32 percent of the viewing public – more than 916,000 pairs of eyes – tuning in. The show sticks to the basic Great British Bake Off format, but makes enough changes – in all the wrong places – to stumble where it could have soared.Seven pairs of eager home bakers started out the season, looking to prove their chops on pies, cakes, mousses, cookies and everything in between. In each episode the teams are tasked with two distinct challenges, and at the end one pair is crowned the champions and another is sent packing.The contestants hail from all over the country, and are a haphazard mix of father and daughter, mother and son, sisters, friends and some random, mismatched pairings. Forcing participants to come as teams, as opposed to the original show’s single contestants, leads much of the focus to be on bickering and drama, instead of on the creations coming out of the oven.It also cuts out what we might have seen in interaction between contestants – asking each other for advice, commiserating over failings and generally building friendships despite being competitors.Nevertheless I’m happy to see some big personalities among the first batch of contestants (for reasons I don’t quite understand, a new 14 competitors will be showing up in episode two). In fact the most unlikely duo seems to also be the most promising so far: Yuval, a 42-year-old drag queen and Lior, a 20-year-old shop assistant – friends who met at a party – turned out some of the more impressive desserts on the show. Unfortunately the show’s two presenters, Aya Kremerman and Paula Rosenberg, seem to lack any personality at all, and simply pop up once in awhile to remind us they’re still there.But what marked the most dramatic difference in quality – and tone – between the original and the Israeli spin-off is the attention to technical detail. While I don’t expect every viewer to have studied classical pastry techniques the way I did, the heart and soul of baking is its precision and perfection. But with two judges with a tenuous connection to the world of pastry – and little time devoted to explaining technique or execution, the show becomes another competition more about drama and personalities than about baking.The smash success of Great British Bake Off in England led to a revival in the country of home baking – not just because of the show’s popularity but because it showcased the beauty and style of the confectionery arts, and showed the growth of the participants as they faced more and more difficult challenges.What got lost in translation was not just the original’s video portion dedicated to studying the history of a specific pastry, and tasks that pushed the limits of the contestants, but judges with enough know-how to guide the participants to greatness and help them overcome the potential pitfalls of pastry.Instead of the British Paul Hollywood and Mary Berry, a pair with a combined 80 years of baking experience, we get Carine Goren, Oded Brenner and Ran Shmueli. Brenner, of the Max Brenner chocolate chain, may be an expert on everything chocolate, but his comments rang hollow when it came to the cakes presented Saturday night. And Shmueli is an experienced restaurateur, but with little direct connection to desserts.Goren is the one bright point in the show, with both infectious bubbliness but also the knowledge and experience to guide the amateur bakers to pastry perfection.Indeed, Goren was the only one to even touch on some of the science behind baking, and offer tips to a pair on how they could have avoided a common calamity: a cracked cheesecake.While it’s true that the editing process leaves the viewer without a full picture, some of the judges’ comments left me scratching my head. One duo presented a fondant-covered pink panther cake covered with gouges, wrinkles and creases, and the judges simply praised its fun, youthful appeal. Another team offered up a many-layered cake with incredibly sloppy frosting work and unappealing and uneven dribbles of sauce down the side. The judges? They said it looked like a birthday cake emoji and insisted on taking a selfie with it – on air.Unfortunately for Bake-Off Israel, it’s impossible to judge it in a vacuum, after having witnessed (and loved) the wonder that is the original Great British Bake Off.So will I keep watching? Of course – it’s pastry in prime-time, and I’m still holding out hope that as the less talented are winnowed out, the quality will rise, the challenges will increase in difficulty and the contestants will rise to the occasion. And if not? At least it’s something to complain about aside from cleaning for Passover.Bake-Off Israel airs Saturday and Wednesday nights on Keshet’s Channel 2; full episodes are available at mako.co.il