A taste of Peru in Tel Aviv

Peruvian chef Pedro Luis Guimet cooks up a superfood storm at the Sheraton. 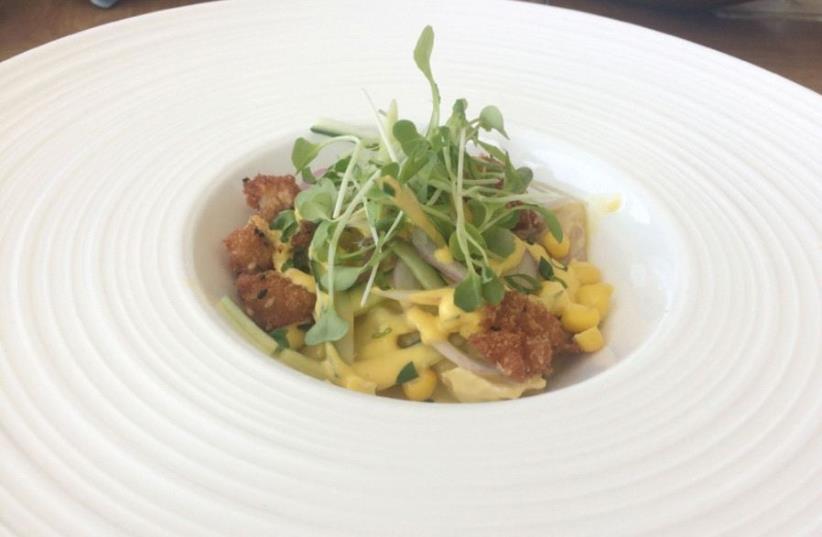 CHEF GUIMET’S unique take on ceviche
(photo credit: MICHELLE MALKA GROSSMAN)
Advertisement
You see them lurking at the health food store. You might have even snuck them into your smoothies. Lucuma, Golden Berries – do any of us know much more about these so-called “superfoods?” There is no set definition for a superfood, but they are known as foods that provide a nutritional punch; rich in vitamins, minerals and antioxidants, which are said to help the body repair itself and fight disease. They range from the familiar, like spinach and salmon, to the exotic.Peruvian Food Week, which took place last week at the Sheraton Hotel in Tel Aviv, in collaboration with the Embassy of Peru in Israel, showed off the best of what the South American republic’s superfoods have to offer.Cooking up a storm was Chef Pedro Luis Guimet, best known for his award-winning Peruvian-Japanese fusion restaurant Niqei in Lima.He described the dishes he prepared as “85% authentic,” though it was apparent that the dishes would be different from what you would find at your average Peruvian restaurant.Every dish had some sort of unique “twist.”For example, the appetizer was ceviche, one of the most elemental dishes of Peru. Usually consisting of raw fish marinated in lemon and salt, Guimet’s version drizzled raw sea bass with a yellow chili sauce and topped it with tiny nuggets of fried fish.The main course was carapulcra, described as “crispy rice and chicken stew in a creole sauce.” While definitely tasty, it seems that this was a deconstructed version of the traditional stew. It consisted of a base of potato stew artfully sprinkled with bits of fried chicken.The dessert options were plentiful and each featured at least one superfood ingredient grown and produced in Peru (and available for purchase in Israel, though not usually in their fresh, raw form).The first dessert was Lucuma pudding.It tasted like a classier, crisper version of a sweet potato pie but mixed with a cacao (another superfood grown in Peru).The next dessert featured quinoa.Many know it as part of a savory meal, however, Guimet took it on a sweet tangent by turning it into a hearty dessert similar to rice pudding.It was topped with a golden berry, a Peruvian-grown superfood similar to a gooseberry and sometimes known as an Inca berry.The last dessert was rice pudding in lucuma [dairy-free] milk. It had a bubble-gum-type taste with hints of raisin and clove. I quite enjoyed it though for some it was too unexpected.All of the sweet fare was sweetened with panela, a type of partially refined cane sugar grown in Peru.By the end of the meal, my palate was left with the desire to learn more about authentic Peruvian cuisine and to learn more about the fascinating potential of exotic superfoods.