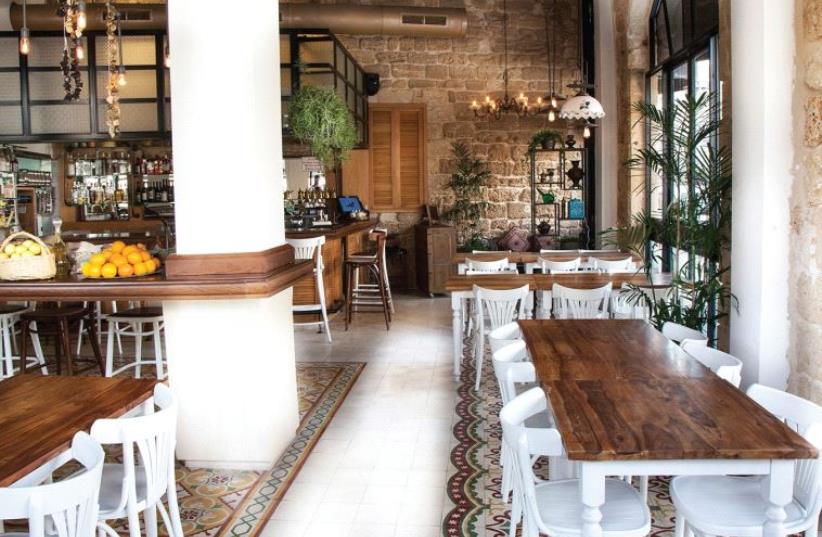 Al Ashi restaurant in Jaffa
(photo credit: PR)
Advertisement
The fine dining restaurant Al Ashi, helmed by Salah Kurdi of Israeli reality TV fame, has made quite a splash in the Hebrew press since it opened in August in the same place as his previous restaurant, Al Jamila. Located on the main thoroughfare leading to the Jaffa Flea Market, Al Ashi (Arabic for “the chef”) boasts an impressive decor, with a decorative tile floor, stone walls and a timber ceiling. Pleasant vocal Arab music plays in the background.There is only one specialty cocktail (NIS 45). A blend of gin, arak, coriander, syrup and lemon, garnished with ribbons of cucumber and a sprig of cilantro, the nameless cocktail was bracing and refreshing.The complimentary house bread, which resembled a baguette that had been pressed flat, was served with olives and tehina and, best of all, olive oil sweetened with pomegranate concentrate.The menus, in both English and Hebrew, were quite detailed.Unfortunately, there were more than a few inconsistencies between the two languages. For example, mutton (keves) was almost always mistranslated as lamb. In other instances, secondary ingredients were misrepresented – fortunately, with no negative impact on flavor.The starters we had were all beautifully presented, starting with the kubbe labaniyeh (NIS 48).These were pear-shaped bulgur dumplings filled with cheeses, green zaatar and spinach with ground almonds, accompanied by black eggplant purée and beet purée. The kubbe were perfectly fried, and the filling positively delicious.The kubbe sayade (NIS 49) was chopped white fish in a crispy bulgur coating on a bed of puréed cauliflower and strained yogurt, garnished with dill and red chili pepper. The cannoli-shaped kubbe were not very crispy but still fried with a deft touch, while the fish was fresh, moist and flavorful.The meat shush barak (NIS 46) was the starter recommended by our waiter. What the menu termed “pastry pockets” were actually round ravioli stuffed with ground mutton and served in a yogurt and hot mint and sauce, topped with slivers of crispy fried garlic.The best way to describe this dish is an Arab version of kreplach.Together with the distinctive sauce, this was an outstanding dish.The kadayef belahma (NIS 43) were crescent-shaped turnovers filled with ground mutton on a bed of tehina, chives and mint, served with a slightly piquant tomato salsa and red onions in sumac (another departure from the menu). The kadayef were fried just right, while the dish as a whole represented a wonderful interplay of flavors.The starters were not large, so my dining companion and I had no trouble splitting four of them, with room left for two main courses.The lamb chops (NIS 150) were another recommendation of the waiter. The four chops, served on a bed of celery root purée together with stuffed vine leaves, were pink throughout and were melt-in-yourmouth succulent.The arbaat ayoub (NIS 85) was a tower of fat fresh sardines stuffed with herbs and stir-fried spinach, garnished with baby asparagus and served on a sauce that was like a thin corn chowder seasoned generously with garlic and pepper.Fans of good-quality canned sardines will appreciate this upgraded version, which leaves an aftertaste of heat.There is a limited list of wines exclusively from Israeli wineries, with four available by the glass. We enjoyed our glasses of Flam Classico (NIS 45), a full-bodied Merlot blend, and a Binyamina Shiraz (NIS 32).The dessert menu offered six tempting choices, from which the waiter recommended the stuffed figs (NIS 34). They were dried figs dipped in a beer batter, lightly fried and stuffed with fresh fruit, served on a cardamom-infused crême anglaise studded with pomegranate seeds. It was like figs tempura – light and sweet. Just what a dessert should be.The Halawet nebi Rubin (NIS 35), meanwhile, had a more candy-like feel: cylindrical morsels of pumpkin cooked in spiced sugar water and smothered in strands of halva. It called to mind Turkish delight, with lots of pistachios for welcoming crunch and contrasting texture.We washed down dessert with traditional Arab tea and Turkish coffee. Since the hot drinks were served with a small platter of fenugreek cookies, this could have been a dessert in itself (NIS 30).The writer was a guest of the restaurant.Al AshiNot kosher 4 Olei Tziyon St., Jaffa Tel: (03) 648-5748