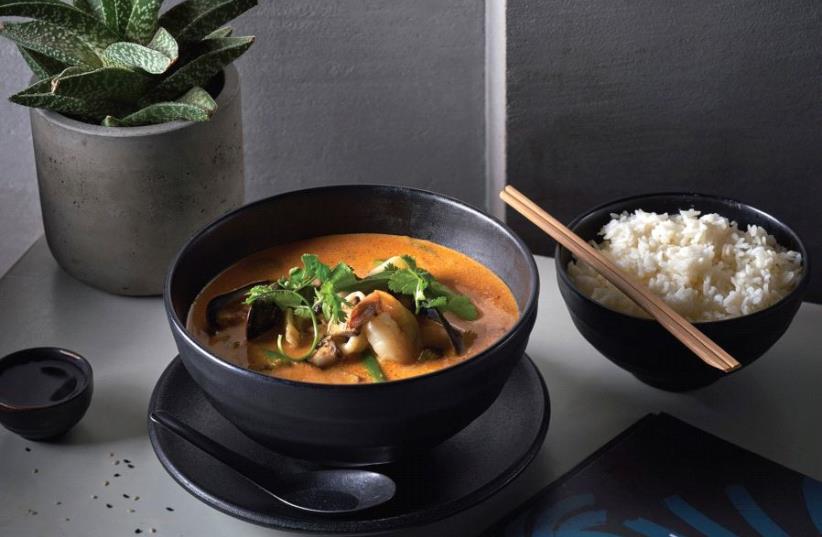 Asian Deli
(photo credit: PR)
Advertisement
Now entering its third year, Asian Deli offers dishes from Thai, Chinese, Vietnamese and Japanese cuisines, in a decor accented by Oriental esthetics, from the stylish ceramic plates to the substantial chopsticks, nicely scented towelettes and even the packaging of the flavored green tea sachets.The English food menu is not updated as frequently as the Hebrew one, so it is missing the lone reference to the house cocktail and still mentions duck, which is no longer available. But it is generally reliable, with symbols indicating which dishes are vegetarian/vegan.A popular appetizer is the pop shrimps (NIS 49) – fried popcorn shrimp atop a pile of shredded lettuce, served with two dipping sauces. The tiny shrimp were breaded and fried to crispy perfection. After trying each sauce, I ended up combining the two, thus discovering the level of complex spiciness I liked best.One example of Asian street food gaining popularity in Israel is bao (NIS 33-45) – small sandwiches made with steamed bread. At Asian Deli, what the menu calls “buns” are two dainty sandwiches served on a bamboo skewer; and there is a nice choice of fillings. We tried the fish tempura, which was heavy on the mayo – although I didn’t mind, as it was a pleasant Japanese version. Still, the light and airy buns stole the show. It is likely something that kids would enjoy if the restaurant’s children’s meals do not appeal.There was one Ramen dish on the menu, starring chicken as the featured protein (NIS 53). The rich broth was replete with thick noodles, fresh mushrooms and chicken breast strips that were moist and flavorful. A veritable meal in a bowl.The same can be said for the Tom Yam soup (NIS 69), which was a feast for the eyes as well as the palate. The practically overflowing bowl of the pungent Thai classic was studded with seafood – mussels, shrimp and calamari – as well as cherry tomatoes, mushrooms and bean sprouts.Accompanied by a copious serving of steamed white rice, this was a dish whose pleasant heat continued to suffuse through the body after each spoonful.Another good option starring the same trio was the seafood curry (NIS 69), an equally generous dish in a red coconut cream sauce that boasted just the right amount of spice.One of Asian Deli’s beef dishes was the Pad Kapao (NIS 59) – ground beef and vegetables in a mild sweet and spicy sauce, topped with fried egg.The sauce and yolk seeped into the meat and rice to make an eminently satisfying main course.It can be a difficult chore to finish all the food here, but one can take leftovers home or order some takeaway.I discovered that allowing the flavors of the Tom Yam and Pad Kapao to meld further for an additional 24 hours led to another fine dinner the following day.It is worth saving room for at least one dessert. The creme brûlée (NIS 35), with hints of lemongrass and ginger, was a refreshing bit of sweetness, while the “bun special” (NIS 42) was exactly that: two vanilla ice cream sandwiches fashioned out of toasted Asian buns, covered in blueberry topping and crunchy strips of toasted coconut.Asian Deli offers a variety of business lunches (until 4 p.m.), ranging from NIS 49 to NIS 89. Given these reasonable prices, this is the kind of place you can try a couple of times until you've found the dishes you want to make your regular choices.The writer was a guest of the restaurant.Asian Deli Not kosher 15 Habanim Street, Hod Hasharon Tel: (09) 899-2555