Avishai Cohen and all that jazz 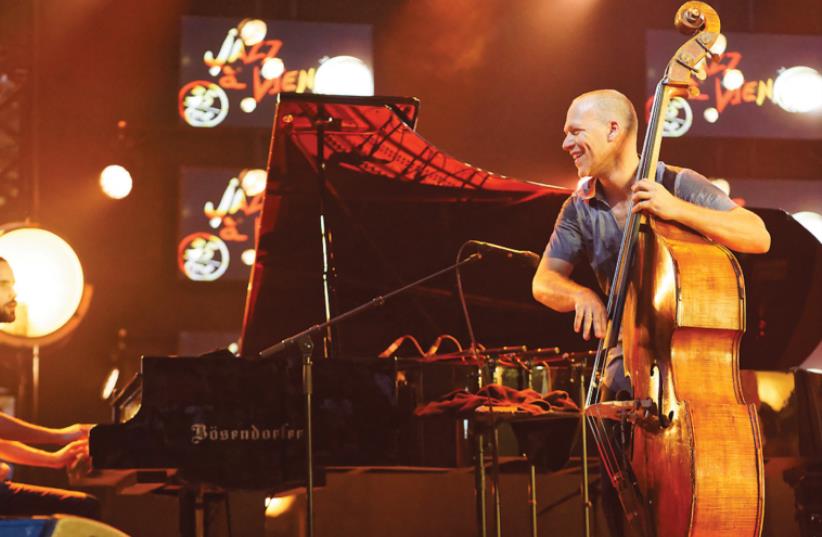 Avishai Cohen
(photo credit: PIERRE CORVAISIER))
Advertisement
International music channel Mezzo, in conjunction with Talit Communications, is celebrating the music and career of internationally renowned Israeli jazz musician Avishai Cohen. Cohen’s career has spanned nearly 20 years and 15 albums. From his early days playing with Chick Corea to his trio and solo work, Cohen has always been open to varying musical influences in pursuit of creativity and new horizons.Mezzo named Cohen musician of the month for February, and will feature a few evenings dedicated to the bassist, singer and composer.Cohen recently sat down with The Jerusalem Post to talk about his musical upbringing, the creative process behind his latest album and the future of jazz.Can you talk about your upbringing in Israel?I was born in the North on Kibbutz Kabri, close to Nahariya. When I was two years old, my parents moved to Jerusalem. Since then, I grew up around Jerusalem’s little outer villages. I grew up with the outdoors; music was from nature. I spent a lot of time with animals and I had a horse. I had a lot of freedom and a lot of room for imagination. When I was nine, I tried the piano because I heard my sister practicing for her lessons. There was a piano in our home, and I was drawn to it. I started fooling around with it basically. I started writing things before I knew anything. The music wasn’t too great yet, but it was what it was. Then I started taking piano lessons around age 10. I did that until I was 14. Then my mother got a job at the JCCA and we moved to St. Louis for two years. So I found myself in St. Louis from 1984-1986, and that was when I started playing electric bass. Then I got into jazz more and more. I started playing in the high school jazz band. When I got back to Israel, I enrolled in the academy of music when I was 16. I got together with other people who played jazz, and I got more into it. Then I went to the army, and I was in the army band. I played Israeli pop for awhile. I bought a double bass when I was 20 and started playing it. That led me to go to New York in 1992, and enroll in the New School of Music in New York, which was quite new at the time. And New York was New York. I played and I studied music more in the clubs and the streets than in school, but still met some interesting people in school. One thing led to another, and I started playing with some really great New York jazz musicians. From that point on, things got even more global and more serious. I always wrote my own music; that’s what kept me concentrated on my own voice. Starting in 2002, I went out on my own and started putting out albums on my own. That was the point where I took the next step with my own music, and since then, that’s been my thing. Now I live here and I’m very busy playing all around the world.

Who is your favorite jazz musician of all time? Probably it’s between Thelonious Monk and Miles Davis, but I don’t really see it like that. I have more than a few favorites, and I can’t say that one is better.

What about your favorite Israeli artist?That would be Arik Einstein. He wasn’t a guy who wrote music so much, but still his singing was so influential. It’s the soundtrack of my time here.You’ve put out upwards of 15 albums. You’re very prolific. Can you talk about your creative process over the years?My creative process is not really clear to me, it’s not something I can put my finger on and say, this is what it is. But usually, I’m alone with a piano, playing and searching, being open to what I hear. When it’s there, it’s there, and I keep on it. I almost always write something. It’s a part of my daily life. There is always creativity in some way, whether it’s playing live or writing. The energy may change, but it’s always there.

You just released a new album, ‘From Darkness.’ What was the recording process like?I’ve done enough albums now to say that it’s not any different from most of them. It’s a stop in time. When I accumulate enough material that I think is great, I take it to the studio and I track it. I take my musicians, whoever they may be at that point, and we record it in a few days. We try to know enough, but not to know too much. To have the combination of the two.Why did you choose the title ‘From Darkness’?Because it’s a part of a quote, “From darkness comes great light.” I didn’t want to be too literal about it, but it’s something that has to do with the most basic things in life. Without darkness, there is no light. Light comes from darkness and vice-versa. I don’t have a big agenda behind the title. It hints at something, and that’s enough. The music says more.

Mezzo named you the artist of the month. Can you talk about the upcoming concerts that will be shown on their channel? Yeah, one concert is with an orchestra and features a whole new repertoire of music that I’ve written and arranged for that concert. The second is with a sextet that I call The New York Division, and it’s with some New York guys who I met many years ago and are great musicians. The third is with an artist who I invited. He is a great flamenco jazz artist from Spain. It’s like a festival.

What was it like for you, putting these concerts together?I know that Mezzo has been recording me and playing me a lot for many years now because I hear it from people and I see them coming to my shows. But to get to the point where they do that is something that I didn’t expect, so I’m very thrilled and excited. It’s a great way for me to document the music and share it with people. At the end of the day, to share the art is what completes it.Do you think that jazz music is still alive and well today? It’s the labeling or the box that makes it difficult to understand. Jazz, to me, is whatever develops from something else and becomes the next thing. I never compare eras. I think that today, in some ways, is the most glorious era of jazz, in terms of all the young people who are into it. They’re developing themselves as the next new things. There are others, myself included, who do their own thing, not trying to be another Miles or another Duke Ellington because it’s completely impossible anyway. So the real thing of jazz is the evolving of it. Meaning people who take the elements of jazz and wrap them with their own environments in a way that comes out authentic, new and daring. If it doesn’t have swing like it did before, or if the rhythm is different, that doesn’t mean it’s not jazz. Jazz is anything but one thing; it’s complete originality. The jazz world is made up of brave musicians who are doing their thing despite what kind of money they’re going to make, or how famous they’re going to be. I feel lucky to be in that world.