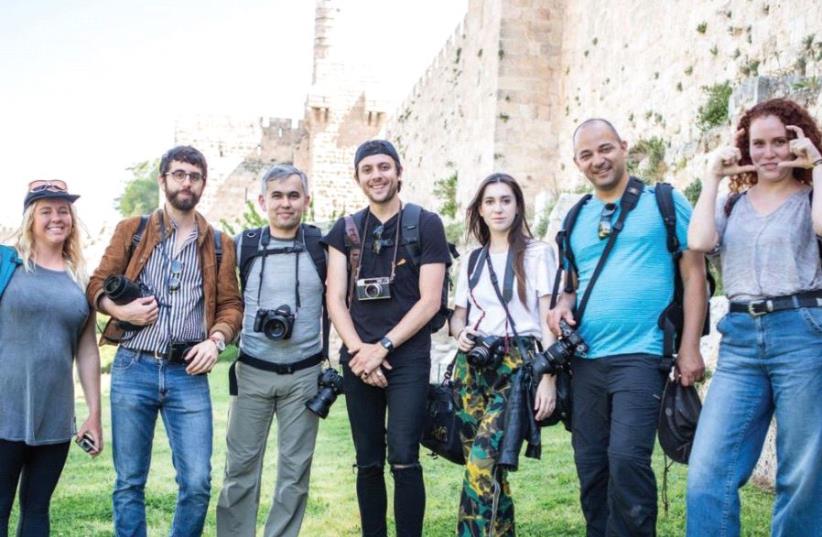 THE GROUP of photographers and their guides pose for a photo outside the Old City of Jerusalem yesterday.
(photo credit: NIR SLAKMAN)
Advertisement
When a five-person tour group passed through the metal detectors to get to the Western Wall on Tuesday morning – they piled at least 10 cameras on the table at the guard station.That’s because these five tourists are all popular and influential photographers, in Israel for five days on a trip organized by Vibe Israel. Vibe, a five-year-old nonprofit, regularly brings groups of social media “influencers” from around the globe on niche adventures, with focuses on food, fashion, architecture, health and more.“These guys, they’re more powerful than movie stars,” said Joanna Landau, founder and CEO of Vibe. “The people who are following them are really, really following them – they’re like their mentors, their icons.”

This group of photographers marks Vibe’s 30th trip since it began in 2011. The participants all have significant presences on either Instagram, Twitter, Facebook or their own blogs, or on all four! Between them, Nasim Mansurov, Irene Rudnyk, Joe Greer, Sarah Lee and Juan Jerez have close to five million followers, and they all arrived in Israel armed with cameras and curiosity.“I’ve always wanted to come to Israel,” said Mansurov, a native of Uzbekistan who lives in Colorado. “It’s such an ancient place, it’s a clash of different cultures, religions, it’s a real interesting place.”Mansurov works as a professional photographer and runs the blog Photography Life, which offers tips and tutorials to photographers of all levels.More than 350,000 people follow the blog’s Facebook page.“Everybody that I told ‘I’m leaving to Israel’ to – they said, ‘Be safe,’” Mansurov recalled.“There’s just this thing that they think it’s dangerous, and I’ve been to Jordan and they said the same thing about Jordan, but when I was traveling there it was amazing and there was nothing like what you see on the news.“If you’re going to be too scared to do anything, you’re just going to waste your life not having experiences,” he added.“For me, it’s all about the experience.”And for Vibe, it’s all about the influence. For the past three years, the NGO, which is funded by private donors and foundations including the Helmsley Charitable Trust and the William Davidson Foundation, has been tracking the impact of each trip.

This moment. Wow. Took this photo today in the Church of the Holy Sepulchre which is said by many scholars, to have been the place of Jesus' crucifixion. Golgotha. As a follower of Jesus, and in my opinion, this photo is drenched with symbolism and hope. The massive beam of heavenly light hitting the empty tomb, and the lone bird ascending up the light beam. Are you kidding me? I can't. This was such a powerful moment. Anyways. Out here for the week with @vibeisrael and some other awesome photographers from around the world. It's an honor to be here. Stay tuned fam. You know the drill. #vibephotography #jerusalem #harmonyhotel #vibeisrael

“We know that we’ve reached with these tours over 50 million people around the world,” said Landau. Using Israeli start-up Tracx, “we track the viral effect of what they publish, it can see any response and anything that made it viral,” as well as the positive or negative sentiments of the responses. “We never have more than 6% or 7% negative,” Landau added. In June, Vibe is organizing a trip for travel bloggers, and in July they’ll be bringing YouTube stars to tour the country.Rudnyk, who lives in Calgary, Canada, specializes in fashion and lifestyle photography.She also uploads tutorials and behind-the-scenes videos to her YouTube channel, which has more than 130,000 subscribers.“I’ve never been to Israel and I’ve always wanted to,” she said.“I’m really excited to see the desert and the Dead Sea.”Lee, who grew up in Hawaii and specializes in water photography, is also eager to see Israel’s seas, from the red to the dead, but she was particularly curious about Jerusalem.“I was just fascinated to learn more and go beyond what we learn about it on the other side of the world,” she said. “It’s fascinating to see how it’s the center of where so many religions came from.”Landau said the groups always include members with much bigger followings as well as those with more moderate numbers.“Sometimes it’s not the big numbers that count, sometimes it’s the higher engagement levels,” she said. “Sometimes the one with [just] hundreds of thousands of followers will be more influential, because they’re more personal and they respond and it’s interactive.”The trip has been carefully cultivated to appeal to the wide interests of all the photographers, with stops in Jerusalem, Tel Aviv, Eilat and the Judean Desert. They’ll hold a fashion photo shoot in Nabi Musa, meet with local photographers, capture the sunset in Timna Park and swim with dolphins in Eilat.

Greer, from Portland, Oregon, said he came to Israel once several years ago, on a trip organized by Israel Collective, a Christian group dedicated to peacemaking.That visit, he said, “had more of a political and religious bent to it. So that’s what’s so unique about this trip, it is focused more on the creativity and the artistry.” He’s looking forward to seeing the desert and spending more time in Tel Aviv.Rudnyk said she had no hesitations about coming to Israel, and was immediately excited to explore.“I’m from Ukraine, and Ukraine gets the same kind of rap,” she said. “For me, I never look at that at all, I don’t feel like places are dangerous or things like that – you just have to know where you’re going.”