Big breakfast at a little café 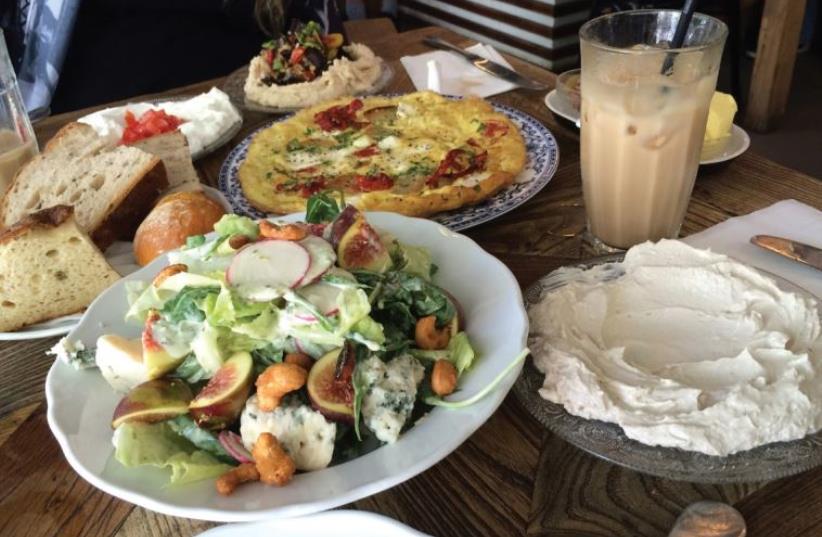 Petit Café in Tel Aviv
(photo credit: PR)
Advertisement
It’s so cliché to get excited about Israeli breakfasts, but it’s hard not to. The fresh bread, chopped salad of juicy tomatoes and crunchy cucumbers, eggs however you want them, tehina, cheese, just-squeezed orange juice and, of course, coffee – so much food that it seems impossible to ever finish it, but you always manage, anyway. What could be better than that? Petit Café, which also has its own catering service, Petit Food, seems to be determined to answer that question with its sophisticated and unique twist on an Israeli breakfast, which is called brunch for two (NIS 118). It would probably be fair to call it brunch for three.The meal came with a basket of bread, with colorful little surprises in the form of dark-red beet rolls and bright-orange carrot rolls, each vegetable contributing a strong color but a subtle taste.The warm, fresh bread is a treat on its own, but the selection of dips and spreads takes Israeli breakfast classics to the next level.The labane with chopped tomatoes and olive oil on top was perfection, and the tehina was so thick it had the consistency of hummus without losing the tangy tehina taste. My dining partner especially loved the paste of white beans served with eggplant salad on top.Then came the flavorful frittata with potatoes, tomatoes, zucchini and cheese, once again topping typical Israeli breakfast fare.And the salad – wow, the salad! A little bowl of chopped Israeli salad has its merits, but Petit Café’s brunch comes with a choice of any full-sized salad on the menu.We chose the green salad with Roquefort cheese and a seasonal fruit, which ended up being succulent, fresh figs. The combination was an outstanding salad that was big enough to eat on its own as a meal – which you can do for NIS 40.The rest of the menu features salad, sandwiches and mostly vegetarian dishes, with a few vegan options and a few options with salmon in them, each for NIS 44 or less.The fresh-baked desserts are also excellent and, like the breakfast, bring original twists on classics.We tried the vanilla cake with crème patissiere (NIS 36), which came in the form of four mini bundt cakes, each filled with the delicious crème and figs and grapes on the side. We also had the blondies with almonds, white chocolate and salted caramel (NIS 22). The caramel served as a kind of icing on top of the blondies, which had a moist, fudge-like consistency and a bit of crunch added by the almonds.Getting to Petit Café is not for the faint of heart. The café is tucked away on a quiet, pleasant, tree-lined street, but on the way there, you pass one of the grungier parts of Florentine, with abandoned marketplaces and dilapidated buildings and graffiti in abundance.The café itself is an airy, bright spot with lots of natural light, a cheery colorful counter for the desserts and a bookshelf full of vintage Israeli cookbooks – Ruth Sikris featured prominently. The brunch-time crowd seemed to be made up mostly of hipsters and were mostly very quiet, as many of them were working on laptops at their tables. Even if you’re not a Florentine hipster, though, Petit Café is well worth a visit for brunch.The writer was a guest of the restaurant.Petit Café
Kosher
70 Yedidya Frankel, Tel Aviv
(03) 537-2202; 052-645-1897