Breakfast and more Morning to night

La Padella is an Italian delight 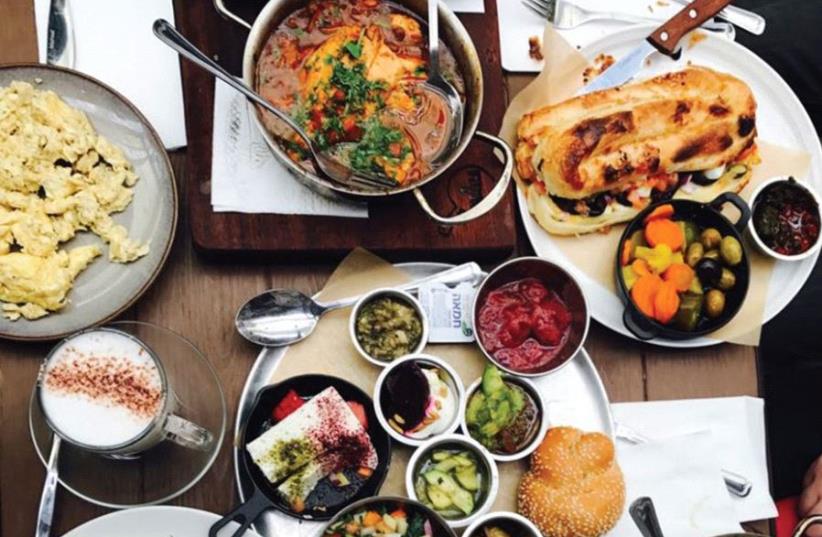 La Padella
(photo credit: PR)
Advertisement
Street food options in Jerusalem’s Mahaneh Yehuda market are plentiful, with new places opening up all the time. But for those of us who sometimes prefer to sit in a proper café and enjoy an indulgent brunch, the options are more limited. Luckily, La Padella has changed that.The restaurant has a diverse menu that includes more than 10 types of breakfast, as well as an interesting selection of sandwiches, salads, rich main courses and decadent desserts. Located in the space where Café Mizrachi once stood, La Padella has quickly become popular with both locals and groups touring the shuk (it can seat up to 25 people at a long table).As with many places in the shuk, at night La Padella turns into a bar with a less than standard wine and cocktail menu and a well-stocked bar. We enjoyed a refreshing glass of Psagot White Seven (NIS 30/glass and NIS 95/bottle) with our meal but hope to go back soon to try the cocktails.The owner, Menahem Sitbon, had dreamt of opening a restaurant since he was a child in France. He has teamed up with local chefs Aharoni Cohen and Bar Levy, both of whom previously worked for the Machneyuda group. The name La Padella means “the saucepan” in Italian, as most of the dishes are cooked and served in small metal pans. It is also a tribute to Menahem’s Italian wife.Starting with breakfast, we enjoyed the French breakfast (NIS 52), which consisted of a trio of brioches: one with smoked salmon and cream cheese; one with Saint Maure cheese with pear; and a plain brioche with butter and homemade jam on the side. The salad it came with was a bit sad, but the mini yogurt with muesli was very nice. We also tried the Moroccan shakshouka (NIS 48) with sardines, which was tasty but lacked a real punch. We particularly liked the laffa, tahini and olives that accompanied the shakshouka.For the main course, the mac & cheese (NIS 54) with a herb and garlic crust was one of our favorite dishes on the menu. Served in the iconic metal pan, the sauce was flavorsome and oozing with fresh cheese. The dish was very rich, so I’d recommend sharing it. My New York companion pointed out that it was not a traditional American style mac & cheese, but she liked the Jerusalem twist, and we savored every bite.Another comfort dish that stood out was the pizza (NIS 44), which you would expect at any good Italian restaurant. The base was thin and crispy, with a generous serving of fresh tomato sauce, covered with melted mozzarella. There was the option to add extra toppings, but we enjoyed the simplicity of the plain margarita, and the freshness of the ingredients really came through in the flavors.One of the most unique dishes on the menu was the crispy gnocchi salad (NIS 52). The base of cabbage and root vegetables was topped with sweet potato chips, crispy gnocchi, fried onion, Parmesan, walnuts, sweet chili and cilantro. The light ponzu dressing added to the flavor without being overpowering. The mixture of textures and flavors combined to make a very interesting dish, which was a good balance to the richness of the other dishes.From the snacks menu, we enjoyed the fried cauliflower (NIS 42). It was well balanced with a soft inside and crispy outside, and the drizzle of raw tahini and sweet chili was a great addition.We couldn’t resist trying the cheesy fries (NIS 38).They had a generous topping of what was supposed to be cheddar, but it lacked the kick of English cheddar.Although it was an indulgent dish, it needed a stronger cheese or additional seasoning.Our favorite dessert was the French toast (NIS 44) from the breakfast menu, which was very decadent but was not overly sweet. It was made from fresh challah and served with cream, fruit salad and jam. The price included a drink of choice. The strong, rich Italian macchiato was served with the traditional shot of soda water on the side.We also devoured the churros (NIS 42) served with banana brulee, dulce de leche and maple syrup, although they were not as good as ones that are freshly made. The cigars (NIS 42) filled with chocolate, peanut butter and banana were incredibly rich, but the accompanying vanilla ice cream provided a good balance.Many of the dishes can be ordered with gluten-free bread: all the sandwiches, the shakshouka, the pizza and some of the breakfasts.La Padella is a wonderful addition to the eateries in the shuk, offering something for all tastes. It also helps that the staff are very friendly and happy to help.