Mapu, named after the street on which it is situated, occupies more than half of the lobby of the attractively refurbished Prima City Hotel. 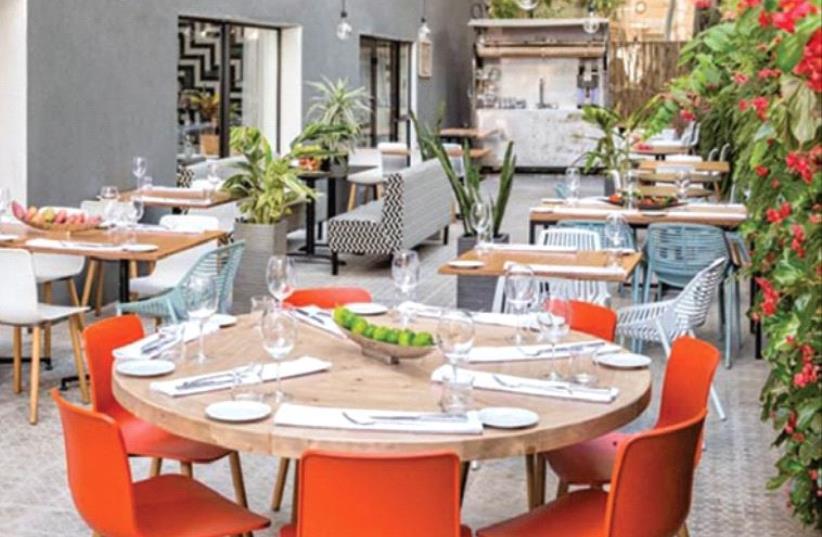 Mapu restaurant
(photo credit: PR)
Advertisement
In recent years, chef Nir Zook has opened and closed a succession of restaurants in Tel Aviv, following the closure of his lamented venerable Cordelia in Jaffa. Now he is ensconced in the Prima City Hotel, between Hayarkon and Ben-Yehuda streets, a prime location where, it appears, he will be staying put for a while.Mapu, named after the street on which it is situated, occupies more than half of the lobby of the attractively refurbished hotel, extending as well to a welcoming al fresco area bordered by a wall of greenery. Although it has been open for only a month, the restaurant was full midweek, hosting a loyal following of Zook’s customers, joined by observers of kashrut, who now have the opportunity to discover the talents of the acclaimed chef. Zook also has plans to offer traditional Shabbat dinners – “with yiddishkeit” – on Friday nights, for hotel guests and the general public.A bilingual menu is already available, although it does not yet extend to the cocktails or desserts. The wait staff do explain them in English, however.There are four specialty cocktails (NIS 44), of which we tried the arak with fresh-pressed pomegranate juice, which tasted like sweet licorice candy.The mojito beetroot, meanwhile, has little in common with a real mojito; but this blend of rum, lemon juice and natural beet juice, with whole green grapes and chunks of red beet, was delicious and refreshing.As we waited for our appetizers, we were served an elongated basket of the house breads (NIS 18): charred shards of focaccia, a loaf of ciabatta and a Jerusalem bagel bread stick, served with two tantalizing dips: tomato salsa laced with white horseradish and a vine leaf paste.There are daily entrée specials. It was our good fortune to be treated to the seared tuna in a homemade Spanish pepper jam (NIS 54). The tasty morsels of fresh fish were nicely enhanced by the slightly sweet confiture.The green salad (NIS 38) was indeed totally green: leafy greens with a scattering of assorted nuts perked up by a lemon dressing that made the zesty dish almost like a palate cleanser.Next came beef prosciutto in nut oil with rahat lokum (NIS 46). The carpaccio-thin slices of dried beef, moistened by the nutty oil and accented by tiny cubes of Turkish delight and dots of chili pepper, was a masterpiece.The chef’s recommendation was lamb brisket slow-cooked in a red wine sauce, with shimeji mushrooms and stuffed dates (NIS 130). The meat was melt-in-your mouth tender, but what stole the show were the succulent dates filled with ground lamb.My companion, meanwhile, enjoyed the moist and flavorful filet of drum fish on artichoke cream, accompanied by perfectly grilled organic vegetables (NIS 96).The wine list consists exclusively of Israeli wines chosen personally by the chef. At any one time, there are five rotating wines available by the glass (NIS 38 – NIS 48).We had two desserts (NIS 40) that were polar opposites in texture but long on flavor. The bar of chocolate and poppy seed under a layer of Italian meringue and surrounded with orange coulis was thick and decadently rich.On the other hand, the coffee mousse studded with strands of kadaif, nuts and dried fruit was light and frothy, achieving what Zook had envisioned: Arab pastry floating in a foam of Turkish coffee.