Have no plans for tonight? How about staying in and cooking some delicious dishes for family and friends? 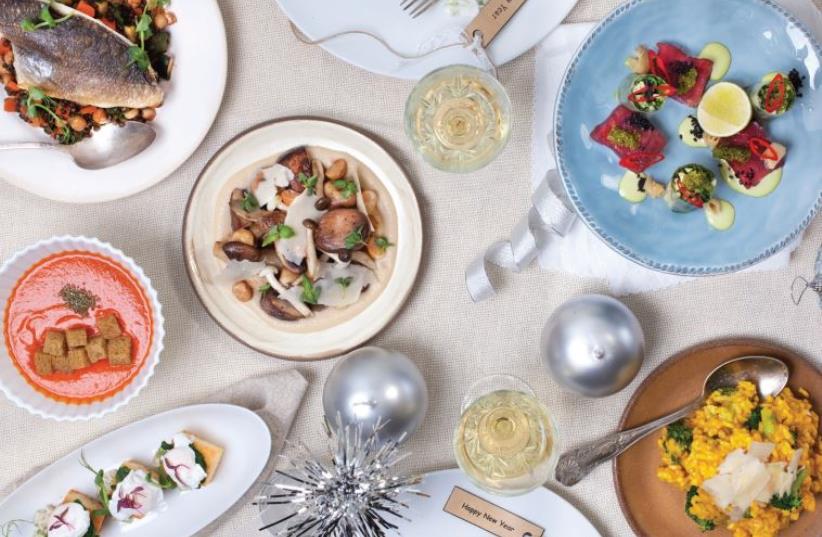 Food recipes
(photo credit: SARIT GOFFEN)
Advertisement
Feel like celebrating but forgot to make restaurant reservations? How about cooking a sophisticated (but not difficult) dinner at home? Chef Alon Lipinsky suggests a few tasty Asian-inspired dishes for an intimate and warming New Year’s dinner.TOMATO ROSEMARY SOUP WITH CROUTONS Serves 4 to 6✔ 1 kg. ripe tomatoes, rinsed and roughly chopped ✔ ½ kg. cherry tomatoes, rinsed and halved ✔ 3 garlic cloves, crushed ✔ 1 celery root, peeled and finely chopped ✔ 1 leek, rinsed and finely chopped ✔ 1 sprig rosemary ✔ 3 Tbsp. olive oil ✔ Pinch each: cumin, white pepper, salt, sugar For the croutons✔ A loaf of bread, cut into 1-cm. cubes ✔ 2 Tbsp. olive oil In a large pot over medium heat, place the oil, garlic, celery root, leek and half the rosemary leaves. Cook stirring regularly for 5 to 7 minutes. Add the tomatoes and bring to a boil over high heat. Lower the heat and cook, covered, for about 25 minutes, stirring every 5 minutes or so. Add salt, sugar, cumin and pepper according to taste. Add the remaining rosemary leaves and cook over low heat, uncovered, for another 15 minutes. Remove from heat and use a stick blender to blend until smooth. Add water to thin out the texture of the soup if desired. To make the croutons: Toss the bread cubes in olive oil and a little salt. Bake at 165° C for 12 minutes until crisp.RED TUNA SASHIMI WITH SPRING ROLLS Serves 4✔ 250 gr. red tuna, skinned and deboned and cut into 1x1.5 cm. rectangles ✔ 1 tsp. wasabi ✔ 2 Tbsp. mayonnaise ✔ 50 gr. minced ginger ✔ 4 sheets of rice paper ✔ 1 zucchini, rinsed, deseeded and julienned ✔ 1 cucumber, deseeded and julienned ✔ 50 gr. fresh green beans, blanched and halved ✔ Leaves from ½ a stalk of cilantro ✔ 1 red chili pepper, thinly sliced For the sauce ✔ ¼ cup soy sauce ✔ ¼ cup lemon juice ✔ 1 Tbsp. honey ✔ A 1-cm. piece of ginger, minced ✔ 3 Tbsp. sesame oil In a small bowl, mix together the wasabi and mayonnaise until evenly combined. To make the spring rolls: Rinse a piece of rice paper in water for about 15 seconds, then place on a dry cutting board. Spread a very thin layer of the wasabi mixture on the lower 1⁄3 of the rice paper, then layer on a narrow pile of the cucumber, zucchini, green beans and cilantro. Roll up the rice paper until you get a cigar shape. Cut into three equal pieces. Repeat with the remaining rice paper and vegetables. To make the sauce: Place all the ingredients in a small jar and shake well for about 30 seconds. To plate the dish, place drops of the remaining wasabi mixture in five spots on the plate. Arrange 3 to 5 cubes of red tuna on the plate. Around them, arrange the spring rolls and the ginger. Sprinkle the slices of pepper and drizzle the sauce on top.ROOT VEGETABLE PUREE WITH MUSHROOMS, WALNUTS AND PARMESAN Serves 4For the mushrooms ✔ 200 gr. champignon mushrooms, quartered ✔ 200 gr. Portobello mushrooms, cut into sixths✔ 1 package shimeji mushrooms, broken up ✔ 1 package oyster mushrooms, torn by hand into ½-cm. pieces ✔ 1 package king oyster mushrooms, quartered ✔ 2 Tbsp. soy sauce ✔2 Tbsp. silan (date honey) ✔ 1 Tbsp. balsamic vinegar✔ 50 gr. butter✔ Salt and pepper For the root vegetable puree✔ 1 celery root, peeled and diced ✔ 1 parsley root, peeled and diced✔ ¼ of a small cauliflower✔ 100 gr. Jerusalem artichokes, peeled and diced ✔ 1 leek, rinsed and diced ✔ 200 ml. heavy cream ✔ 100 ml. water ✔ 100 gr. butter✔ 1 Tbsp. honey ✔ ½ tsp. white wine vinegar ✔ Salt and white pepper To finish:✔ 50 gr. grated Parmesan ✔ 50 gr. toasted walnuts ✔ 1 package micro basil✔ 1 tsp. truffle oil To prepare the puree:In a large pot, place the celery root, parsley root, cauliflower, Jerusalem artichokes, leek, cream, water, butter, vinegar and honey. Bring the mixture to a boil and lower the heat, cooking covered over medium heat for about 25 minutes, stirring occasionally. Use a stick blender to puree the mixture until smooth, then pass it through a strainer. Season with salt and pepper, and additional honey if needed.To prepare the mushrooms:In a small pan, place the butter, soy sauce, silan and vinegar and bring to a boil, then remove from the heat.Heat the oven to 250°.In a large bowl, gently mix all the mushrooms together and place them on a large metal or glass tray with high sides. Roast the mushrooms for about 20 minutes, then toss them gently in the soy sauce mixture. Season with salt and pepper to taste.To assemble the dish:Place a portion of the puree on a plate, top with the mushroom mixture and sprinkle with the Parmesan, walnuts and basil and a few drops of truffle oil.PUMPKIN RISOTTO (COVER PHOTO) Serves 4 ✔ 100 gr. butter ✔ 200 gr. Arborio rice ✔ 1 liter water or vegetable stock ✔ 1 leek, rinsed and diced ✔ 1 celery stalk, rinsed and diced ✔ ½ kg. broccoli florets✔ ½ kg. pumpkin, with the peel on ✔ White wine ✔ Silan ✔ Olive oil ✔ Cumin ✔ Salt and pepper ✔ 100 gr. Parmesan, grated ✔ Leaves from 1 stalk of basil Drizzle the pumpkin with silan, olive oil, cumin, salt and pepper, and wrap in aluminum foil. Bake at 200° for about 1 hour. Let cool. Remove the peel and grate the pumpkin. Blanch the broccoli in boiling water for 2 minutes, then plunge it into ice water to stop the cooking. Set aside. In a large pot, add ½ the butter, then the leek and celery and cook for 5 to 7 minutes. Add the rice and fry for about 2 minutes before adding the white wine, while constantly stirring. Add in the water gradually, stirring the whole time. Once the rice is cooked, add the pumpkin, the remaining butter, broccoli and Parmesan until it forms a thick, porridge-like texture. Season with salt and pepper to taste. Recipes and photos courtesy of chef Alon Lipinsky of Bistro Brown, 8 Nissim Aloni Street, G Compound, Tel Aviv.