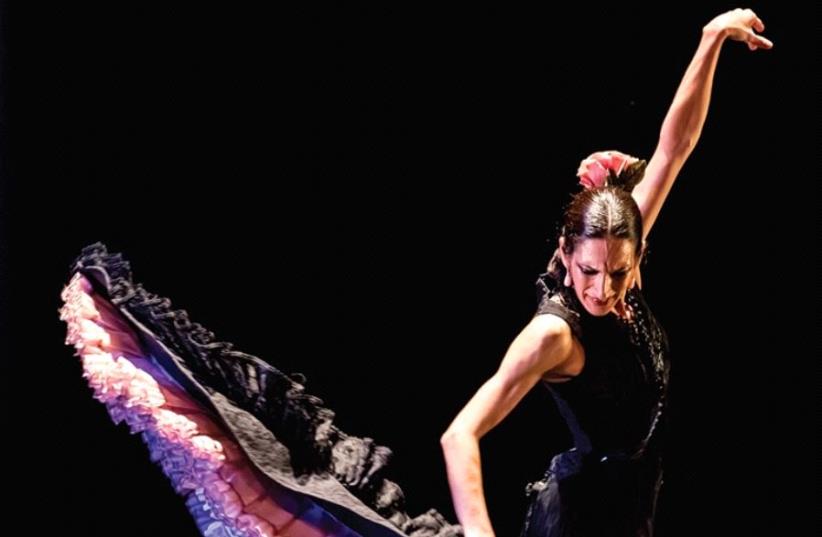 The Dias de Flamenco festival
(photo credit: FELIX VASQUEZ)
Advertisement
Flamenco is one of the most stirring and emotive of dance disciplines. It is difficult not to be swept away by the pared-down, almost feral, outpouring of dancers, singers and instrumentalists. There will be plenty of that on offer on March 23 to 25 when this year’s Dias de Flamenco (Flamenco Days) festival takes place at the Suzanne Dellal Center in Tel Aviv.This will be the 23rd edition of the festival, and 23 years since the passing of Adi Agmon, to whom the event is dedicated. Adi’s mother, Eva, who has been at the helm of the festival since its inception, stresses, “This is about celebrating life.”She says that her daughter loved flamenco.“She was tall, too tall for ballet and that kind of thing, so I thought flamenco could suit her,” she explains.It was Adi’s dream to go to Spain to study the dance form but was too ill with cancer to go. That led to the creation of the Adi Foundation, which provides an annual grant for a talented young Israeli flamenco dancer to go to Spain to develop her gifts.The Dias de Flamenco program takes in top class shows, as well as the Israeli Flamenco Competition for girls, the winner of which is awarded a study trip to Spain.The festival has grown in size and domestic and international stature over the years with, according to Agmon, top dancers from Spain and elsewhere clamoring to come to Israel to participate. This year’s foreign contingent includes acclaimed dancer sisters Tamara and Ursula Lopez from Spain and compatriot artist Leonor Leal. All three will perform in Pintor Y Flamenco (Painter and Flamenco), which is a tribute to early 20th-century Spanish artist Julio Romero de Torres.Ursula Lopez says she was drawn to flamenco from a very young age.“I don’t remember exactly how I got started in it, but I presume my father was ‘the guilty party.’ It was thanks to him that I became besotted with dance,” she says.It was love at first sight for the youngster.“Flamenco always attracted me. I felt at ease with it from the outset. It was a place where I could express myself in the most natural way. It is a place where I have no fears or preconceptions,” she adds.While Adi Agmon may have harbored some ballet-oriented intent, Lopez found a way to combine the two. She and her sister trained in classical ballet before deciding to focus on flamenco. Lopez intimates that there is nothing new about crossgenre fusions, especially in view of the belief that flamenco originated from Gypsy groups that made their way from India to Spain, picking up a slew of cultural background en route. All this and more make flamenco what it is today.Agmon says flamenco is a natural fit for dancers from Israel, a notion to which Lopez wholeheartedly subscribes.“Flamenco passed through all the nations, from India and through all the peoples that lived in Spain and is colored by Jewish piyut [liturgical music], too,” she says.Flamenco has been around since the 18th century, but some believe that it hails from Andalusia, the southern region of Spain, which has been home to Christians, Muslims and Jews, as well as Greeks, Romans and Phoenicians. Lopez says all that comes to the fore in the dance form.“The art of flamenco is absolutely connected to the culture and customs that are unique to us in Andalusia.Many peoples and cultures lived here, and that is why this is such a rich art – because it draws on many sources,” she explains.Lopez also devotes time to passing on her accrued wisdom to flamenco students, whom she urges, first and foremost, to be true to themselves.“The way I teach is to tell my truth exactly as it is. I believe that is the only way a student won’t feel cheated or empty. After years of experience, I have adopted my own methodology, and I think that what is important to convey to the student is love of what we do and to show everyone that we can outdo ourselves anew, every single day,” she asserts.Lopez is not coming here to unknown territory.“What I know about the flamenco scene in Israel I get directly from the Israeli students who come to me. And there are quite a lot of them! I know there is admiration and great passion, as well as great respect, for this art form in Israel,” she notes.Local flamenco fans are in for a treat, and Pintor Y Flamenco will be performed on each evening of the festival. Younger dance and music consumers will also be well catered to with the Cinco 5 – Juanita and the Guitar show for the whole family, which presents a cross-section of Spanish music genres. The cast includes singer-actor Vered Ovadia, guitarists Roi Weissglass and Yuval Mor, and dancer Inbal Barnea, with Tanya Vinoku in charge of artistic direction. Cinco 5 will take place at the Cervantes Institute in Tel Aviv.Over the years, Dias de Flamenco has made it a point to give young dancers a chance to strut their stuff on the prestigious Suzanne Dellal stage.The Manana de Israeli Flamenco slot will present seven young flamenco groups from all over the country.“Like every year, we work to make these events as full of life and grace as Adi was,” says her mother.Dias de Flamenco takes place on March 23 to 25 at the Suzanne Dellal Center in Tel Aviv. For tickets and more information: (03) 510-5656; www.suzannedellal.org.il; http://www.kerenadi.org