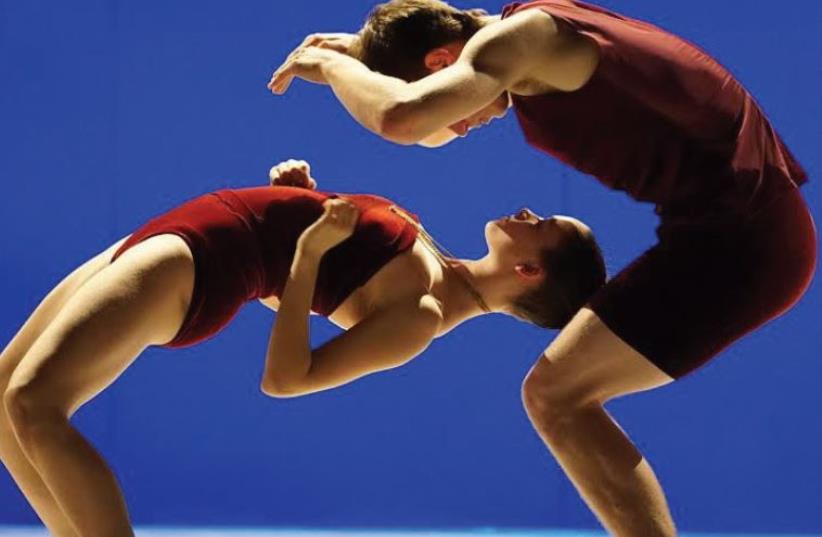 ‘AND STILL’
(photo credit: GADI DAGON)
Advertisement
Batsheva Ensemble, the younger company, got its day on stage with two new creations. One is a tighter and shorter rendition of Bill, Sharon Eyal’s full-evening work, originally composed five years ago. The other work, And Still by Daniel Agami, which opened the double bill, was tailored for the ensemble. Both Eyal and Agami are former Batsheva dancers and within its frame had danced together and absorbed Naharin’s Gaga discipline, and now peruse independent careers.The revised Bill maintained most of the original artistic building blocks, yet the impression is more somber, restrained, with a more introspective approach relying on the intense dancing and well-managed balance of large formations. The body-toned outfits, silver gelled hair and specific detached perception of limbs gave the group an alien, cloned look, yet Eyal mellowed the impression with more opportunities for dancers to do solo roles or gain individual exposure.The soundtrack, a carefully tailored collaboration between sound artist Ori Lichtik, Sharon Eyal and Gai Behar, makes a strong impression. By designing the space through light, Avi Bueno was most instrumental in building layers of shaded ambiance.As in all her creations, Eyal’s dance is greatly physical, passionate, sometimes wildly so, with thrust-out, undulating pelvises and deep pliés. There is all of that in Bill, yet Eyal kept the richly textured movement and toned down some throbbing unison passages in favor of more complex compositions.Daniel Agami’s And Still is a dance with a strong sense of visual aesthetics, evident right from the opening scene, showcasing an original attitude toward space, with unusual play and curved lines. The company wore burgundy velvet outfits designed by Ari Nakamura, and Avi Bueno washed the stage and dancers in quick changes of flashy colored lights, which were hardly justified by the dance itself.At that point, the work seemed to lose its momentum as well.The Ensemble has some fine, promising dancers, but in past seasons it presented a brighter, tighter cadre, which gave the mother company Batsheva a run for its money.