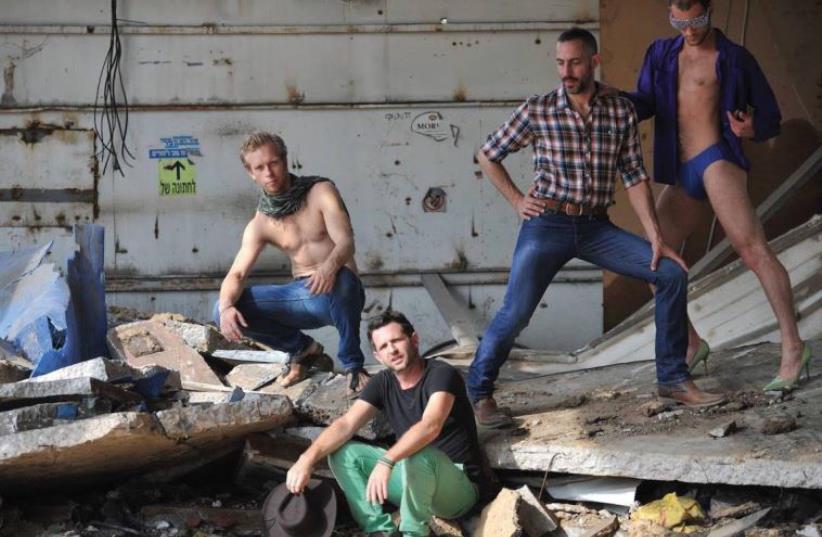 NIV SHEINFELD and Oren Laor’s 'Cowboy.’
(photo credit: GADI DAGON)
Advertisement
After creating their acclaimed interpretation of Two Room Apartment, duo Niv Sheinfeld and Oren Laor premiered Cowboy, a distinctly different piece, which nevertheless maintained close ties with thematic elements familiar from their other works.For a moment it seemed the seasoned couple – fortified by Gilad Yerushalmi and Joel Brey – had wandered onto foreign turf; American country/folk culture. With hardcore country tunes by Heidi Hauge, moves borrowed from folk dances, wearing jeans and plaid shirts and with thumbs tucked in leather belts, it had to be a spoof.Soon the honky-tonk ambiance, with its clichéd masculinity images, turned out to be the upper layer of stratified work and a jumping-off point to some more serious issues, often addressed in a humorous, tongue-in-the-cheek way.Towards the end of the opening “country” scene, Yerushalmi changes his posture slightly and reveals an effeminate nuance, entrapping viewers in conflicting preconceived gender notions. He explained that this dance was not about gender distinctions, and not about expected conventions such as relationships, about us, about you, it’s not about camp, about Pina Bausch, conceptualism or compassion. Yet, in fact, it was about all the above, and then some.The work is divided into sections, kept loose in structure, which worked mostly in its favor. Yet some fragments delivered better than others.The least resolved were the male nudity and the role of the skipping girl.The road leading us among themes and issues unwrapped gradually, through various distinct scenes, each accompanied by different musical choice ranging from Patsy Cline, Abba, Kate Bush and Saida Sultana by Dana International to “Die Moldau” by Bedrich Smetana, which apparently inspired the melody of our national anthem, “Hatikva.”Those were not random choices; each was a key to various subject matters touched on by the dance.Smetana’s music, due to its ties with our anthem, served as fertile soil for a section that took critical look at glorifying national memorials rather than individuals and was the best, most effective scene in Cowboy.