Willi Dorner’s ‘Bodies’ is performed at the March Hare Festival in Bat Yam. 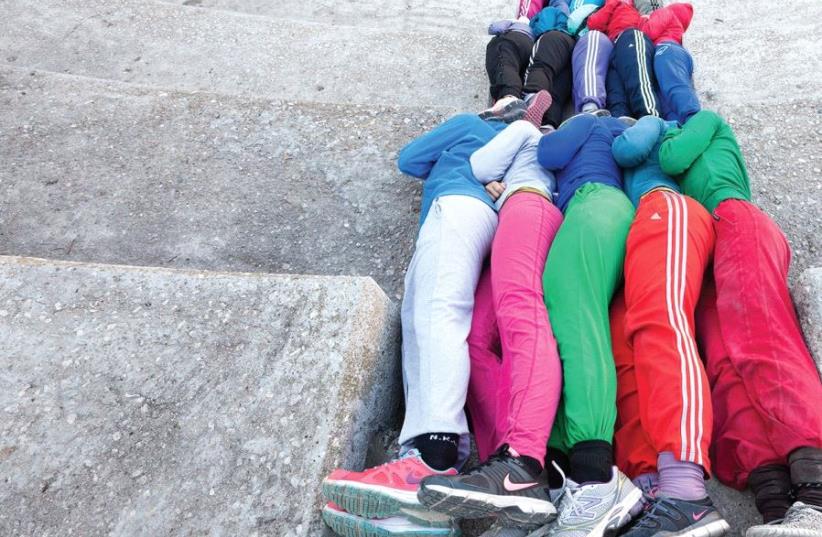 Bodies in Urban Spaces, Athens
(photo credit: PR)
Advertisement
Walking around the streets of Bat Yam, where many would quickly scurry by, Willi Dorner lingers. He takes in every doorway, building entrance, telephone pole. In fact, in this way, the Austrian choreographer has experienced the major cities of the world for more than a decade.Locations that seem insignificant to most are the canvas for Dorner’s revolutionary and internationally acclaimed project Bodies in Urban Spaces.Next week, Dorner will present Bodies in Urban Spaces, or as he calls it, Bodies, as part of the Kelim Choreography Center’s annual March Hare Festival. The “bodies” will be those of the students of the Maslool Professional Dance Program in Tel Aviv.Bodies, like many successful projects, emerged unexpectedly while Dorner was working on a different project.“It started in an urban project in a residential building in Vienna 13 years ago,” he says. “I had a residency, and I worked on different ideas with different artists. Bodies was the first step for the project. I was experimenting and documenting with bodies in empty flats [apartments]. I displayed the photos in an exhibition.Two years later, I had a residency at the Polytechnic University of Catalonia in Barcelona, and I received carte blanche to develop a project. At that time, I used the idea of the project and took it outside into the streets. That’s where the premiere happened; it was the pilot project. A year later, the real premiere happened in Paris in the summer festival,” he recounts.Dorner, 57, was born and raised in Austria. He trained in a variety of techniques, such as Alexander, Release and Body Mind Centering. He began creating work in 1998 and has presented throughout the world since. While many of Dorner’s works were made for the stage, it is his work outdoors, namely Bodies, that has brought the largest level of exposure.One of the signature features of Bodies is the dancers’ bright clothing.Amidst gray concrete and beige marble, the dancers’ sweatshirt-clad figures pop out. This choice was made deliberately both to highlight the drab color scheme of the urban sprawl and the luminous vitality of the living body.“I wanted to build a contrast to this gray, brown, dark, flat color of the architecture. The clothes came in to present contrast. It’s all about making this contrast,” Dorner says.For the past several days, the dancers have been out on the streets of Bat Yam with Dorner’s assistant, scouting for locations in which they can twist and squeeze together to construct eye-catching, human sculptures.“When I work with dancers, I ask them to be careful. I ask them to be focused and cautious; there’s climbing involved and risky moments. There’s sculptures where they make piles of bodies, and they need to make sure not to hurt their colleagues,” explains Dorner.“I like the clearness in the work. Bodies is very minimal; but when you see the sculpture, everything is set – the arms, the legs, the position of the head. I like when dancers are very precise in what they do,” he says.Because many of the positions in Bodies are static, Dorner has found that it poses a unique challenge to dancers, who are used to being in motion. Over the years, Dorner has discovered that the best way to prepare for a performance, or “intervention” as he calls it, of Bodies is not a traditional dance warm-up but rather yoga or meditation.“We found out is that it is very helpful to prepare for the work with yoga and a kind of meditation. We encourage the dancers to focus on themselves, their breath, strength and energy to support calmness because the work is very demanding, not only physically but also mentally. This yoga meditation is a good preparation,” he explains.Following his visit to Israel, Dorner’s second (he performed a staged work here years ago), he will return to Vienna to continue rehearsals for a new project.“I will finish a duet on stage. It’s a duet for two dancers in a video sound installation. It’s a different story from Bodies,” he says.And while Dorner may have returned from the outdoors to the comforts of the indoors, his experiences on the streets have deeply influenced his creative practice.“I have been very impressed by how much economic production forms influence the esthetic ones,” he says.The March Hare Festival will take place at and around the Kelim Choreography Center in Bat Yam from March 20 through March 25. For more information on ‘Bodies in Urban Spaces’ in Israel, visit www.kelim.org.il.