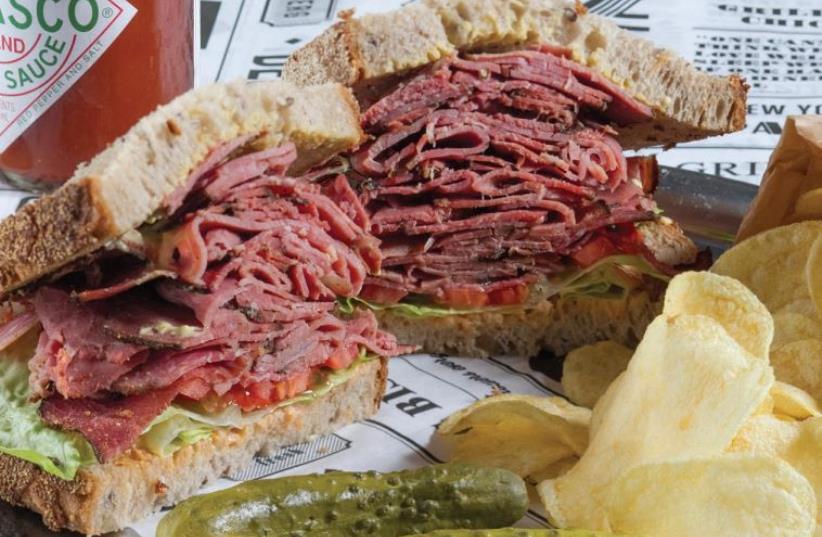 Grinberg Bistro
(photo credit: PR)
Advertisement
A recent pleasant visit to the restaurant Greco led to another fortuitous discovery: the neighboring eatery Grinberg, named after the street shared by both restaurants. Word had it that Grinberg – officially labeled a bistro, a deli and a café – served delicatessen sandwiches on a par with what Jews in the United States enjoy in their fabled delis. I was eager to put those claims to the test.Upon receiving our menus, I noticed a rather startling anomaly: the Hebrew-language menu’s section headings – and indeed, the names of every food item – were in English; it was the descriptions of the menu items that were in Hebrew. There is a menu that is entirely in English, but it is undergoing revision, as major changes to the restaurant’s offerings have just been implemented, as reflected in the “Hebrew” menu.The most significant of these changes came as a disappointment: The pastrami sandwich has been eliminated, while the sloppy Joe and steak sandwich have been promoted from weekly specials to daily fixtures.The modified menu also listed some new specialty cocktails, including an intriguing one called Orange Moon (NIS 39). Sounding almost like a health drink – carrot juice, lemon, chuma pepper and vodka – it was a beverage with layers of complexity, at the same time cool and warming, with kick provided as much by the spice as by the alcohol.As rain began to drizzle, it was a no-brainer to order the soup of the day (NIS 42), which that afternoon was cream of pea. I have had pea soup in Israeli restaurants but never a dairy version, and this creamy variation was remarkably good. It went down smoothly, leaving a slight sensation of heat in the mouth after each spoonful.We ate the soup with an order of Grinberg bread (NIS 16) – a toasted baguette topped with a spread called “cheddar butter” plus flakes of garlic, chili pepper and parsley.The spread was neither cheesy nor buttery enough, but the combination was suitable as an accompaniment to the excellent soup.The first entry under the menu’s New York Deli section was the signature cornbeef (sic) sandwich, which came in two sizes: a quarterkilo or a half-kilo (NIS 69/108).Served on hearty, thick-sliced multigrain rye bread, with lettuce and tomato, even the smaller version was piled high enough with lean meat to require some exertion to fit into one’s mouth. The soft bread, moistened with a dual spread of honey mustard and red pepper aioli, enhanced the overall flavor of the sandwich, which, while not quite there, came as close to American standards as I have experienced in this country.Naturally, the sandwich came with potato chips and a pickle – unfortunately, a cornichon and not a dill or even a half-sour. Still, it was good enough to ask for another one, resulting in the waitress generously bringing a whole plate of extra pickles.Wanting our second main to be a warm dish, we were somewhat surprised to see a representative of a completely different cuisine: Indian fish in a masala sauce (NIS 118). We were also too curious to resist it.Happily, as it turned out. The sea bass, topped with crunchy toasted slivered almonds, was cooked to perfection as were the green vegetables – bok choy, broccoli and asparagus – all drenched in a mild sauce that complemented the fish without overpowering it. Clearly, the kitchen knows how to do more than throw a sandwich together.For dessert, our waitress recommended Grinberg’s two most popular items: the chocolate mousse (NIS 38) and the cheesecake (NIS 42). The former was served tableside from two steel buckets – whopping tablespoons of creamy mousse and fluffy whipped cream piled high on a large plate.Mixing the two confections together resulted in a superb combination that went down easily.The cheesecake, drizzled with caramel, looked exactly like a dense New York-style cream cheese pie but tasted unexpectedly lighter, edging towards Italian-style ricotta.Regardless, it was delicious, and easy to see why it is a customer favorite.The latest banishment from the menu notwithstanding, Grinberg still maintains several weekly specials; it is to be hoped that smoked pastrami might yet merit at least partial reinstatement.The writer was a guest of the restaurant.Grinberg Bistro Not kosher 25 Uri Tzvi Ginsberg Azorei Hen, Tel Aviv Tel: (03) 613-6132