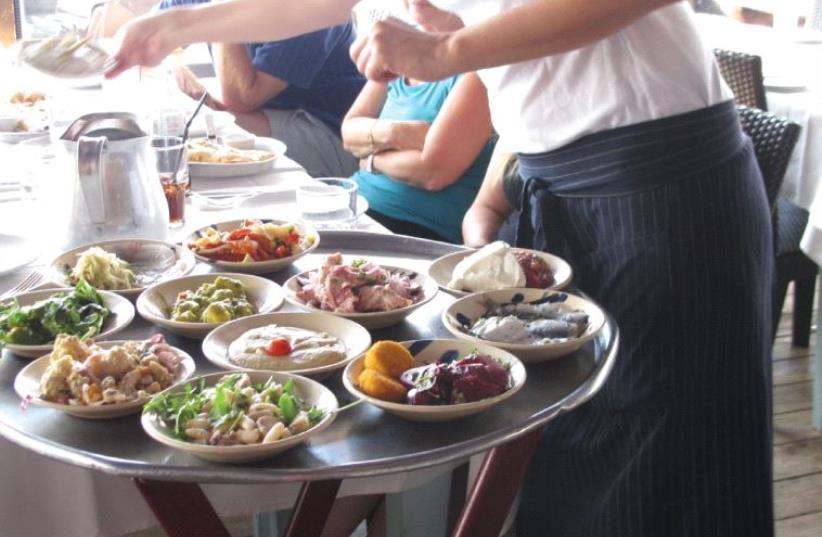 Manta Ray restaurant
(photo credit: Courtesy)
Advertisement
The distinctive round building on the beach just south of Charles Clore Garden is the home of Manta Ray, a restaurant often cited in the international media as one of the reasons Tel Aviv ranks among the gastronomic capitals of the world. Thus it would be hard to imagine a better way to spend an evening in the city than sitting down at a table on the restaurant’s deck, sipping a drink as the sun sets on the horizon and a cooling breeze wafts in from the sea, and anticipating the meal to come.As befits a restaurant with an international reputation, the menu is bilingual, and the staff speak excellent English. The list of specialty cocktails is not long, but one item in particular catches the eye: Manta Ray’s “famous” Frozen Lemon Margarita (NIS 42). It is indeed tart and refreshing.Another is the Pink Lillet sangria (NIS 42), with Cointreau, frozen grapes and mint. This is closer to a cocktail than your ordinary sangria and certainly packs more of a punch.A meal at Manta Ray starts with a waiter bearing a platter of 12 tantalizing mezze (NIS 20-24) and explaining each one by one.Owner Ofra Ganor weighs in with her recommendations: a delicious cauliflower salad with red onion and croutons in a dressing of St.Maure cheese; fresh calamari with fennel and fresh fruit; and an extraordinary gray mullet ceviche, remarkably seasoned with sumac.Many of the mezze rotate seasonally, but one classic standby is the excellent eggplant cream, best devoured with the Balkan bread brushed with olive oil, served with coarse sea salt (NIS 19).While there is a limited selection of meat and poultry entrées, Manta Ray is best known for its fish and seafood, with separate categories on the menu for each.Accordingly, we ordered one from each section – although not without considerable difficulty in narrowing down our choices.As our first main course, we chose one of the few seasonal entrées: shrimps and calamari with figs and Parmesan in a pear sauce (NIS 110). In the mix with the fresh seafood and sweet figs are green leaves of baby spinach and almond slivers, adding crunch to the marvelous interplay of flavors and textures.The fillet of tuna in carrot and ginger sauce (NIS 140), meanwhile, is actually the largest tuna steak I have ever been served.Bathed in an astounding sauce and seasoned with freshly ground black pepper, the perfectly cooked fish melts in the mouth.When it comes to the wine list, Ganor says her philosophy is to serve good wines at accessible prices and make them available by the glass and carafe. In the summer, there is a special selection of “pinks and whites,” which pair well with fish and seafood anyway. We enjoyed a couple of Israeli rosés (NIS 38/40).Ganor went on to recommend as a summer dessert the creme brûlée with phyllo pastry, tangerine cream and lemon zest (NIS 35): tranches of creme brûlée in the shape of leaves, at the end of razor-thin “twigs” of crisp phyllo pastry, alongside juicy berries. Indeed, an ideal dessert for a warm evening.We also tried one of the two chocolate options: crunchy “decadent” chocolate with whiskey-date ice cream (NIS 35).The ganache was thick ribbons of a confection that tasted like a bittersweet cake frosting. What stole the show, however, was the large scoop of uniquely flavored ice cream, a product of another of Ganor’s enterprises: the Iceberg chain of ice cream shops.By the time we finished dinner, the view from our seats had changed. We could see the brilliantly lit Old City of Jaffa and the glistening lights along the Tel Aviv boardwalk, while listening to the same lapping of the waves.Fortunately, Manta Ray is fine with people sitting and relaxing as long as they like, even if they order only a mezze or two and a drink.The writer was a guest of the restaurant.Manta Ray
Not kosher
703 Kaufman Street, Tel Aviv
Tel: (03) 517-4773