A duo of talented chefs and impeccable service keep Angelica in the top echelon of kosher restaurants in Israel. 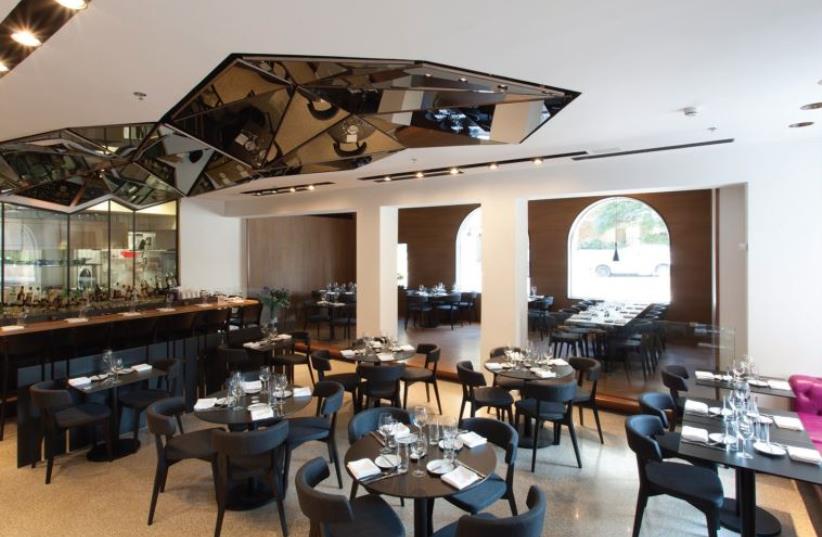 Angelica kosher restaurant
(photo credit: PR)
Advertisement
My colleagues in the restaurant sector tell me business has fallen off in Jerusalem lately because of the security situation, but it would be hard to draw that conclusion judging from the crowd that filled Angelica on a recent week night. Long a favorite of tourists, locals who have not been there in a while have reason to go now to sample the new winter menu of chefs Erez Mergi and Marcus Gershkowitz.A meal at Angelica starts with a basket of fresh bread accompanied by three spreads: the house aioli, eggplant and herbs in mayonnaise, and a paste of sun-dried tomatoes. As good as each is separately, it is rewarding to try them in different combinations as well.Patrons are also handed three of the restaurant’s four bilingual menus: cocktails, food, and wine list. Five specialty cocktails bear witness to a creative touch behind the bar. I opted for the apricot margarita (NIS 45) with the usual ingredients of tequila, triple sec and fruit, with an added twist: cardamom. The drink was served in a stemmed tequila glass piled high to overflowing with crushed ice and garnished with cardamom seeds. The margarita itself was refreshingly different and particularly bracing thanks to the touch of exotic spice.Through large plate glass windows, we could watch the chefs at work in the kitchen as our appetizers arrived.Indeed, the entire decor of the restaurant is impressive: sleek and modern, yet inviting and comfortable, with a unique, partially mirrored ceiling.First was the soup of the day (NIS 48). On this evening it was pea soup with slivered almonds and cilantro oil.The almonds lent a nice crunch to the velvety texture of the broth, which had a pleasing smoky flavor.Next came a dish that neither my dining companion nor I had eaten before: lamb spareribs (NIS 66). Our knowledgeable waitress warned us that the dish was quite fatty – a bit of information that was not at all surprising, since beef spareribs share that same attribute. My curiosity overcame any reservations, and once the fat was trimmed away, I found the flavor more intense in this cut of meat than in lamb chops. The spareribs were glazed with maple and lamb stock and came with a side salad of julienned root vegetables; the maple was very understated, while the fresh, crispy vegetables were an excellent foil for the latent greasiness in the meat.For main courses, we ordered the goose breast sous-vide (NIS 126) and the thin-cut entrecôte (NIS 114). This method of cooking the former assures that the fowl retains its inherent moisture, and the result is spectacular: the tender slices of pinkish goose breast basted gently in duck sauce virtually melt in the mouth.And still, the side dish – sweet potato, leeks and pumpkin gratin – nearly stole the show. This unlikely trio of vegetables featured in a quiche-like loaf that, were it not for the indisputable fact that the restaurant is kosher, would have you believe it was enriched with cheese.The entrecôte came with another advisory from the helpful wait staff: the thinness of the cut means that the kitchen can only commit to grilling the steak medium well or well done rather than our preferred choice of medium. That said, the medium-well beef still managed to be juicy and flavorful; moreover, it was enhanced nicely by dabs of chimichurri and a generous smear of pungent Dijon mustard.The sides of nicely seasoned roasted potatoes and al dente green beans with two kinds of mushrooms were an exceptional complement to the steak, which also went well with a glass of the house wine (NIS 45) recommended by the sommelier: Angelica’s own label of Shiraz, crafted by the Psagot winery.The dessert menu, brought with the third thorough and efficient clearing of the table between courses, presents some difficult choices, thanks to the talented efforts of Angelica’s dedicated pastry chef. Of the two chocolate options, the more intriguing was the chocolate dome (NIS 44) – a mound of chocolate mousse atop a hazelnut-nougat crunch, all encased in a dark chocolate shell. Not enough chocolate? It comes with a side of whipped ganache on a bed of cocoa crumble. At the risk of sounding like a cliché – a chocolate-lover’s dream.Finally, curiosity dictated trying the polenta tart (NIS 44), another first for both of us. In terms of looks and texture, it was remarkably similar to basbousa, although this mellow cornmeal version was much more delicate and less syrupy than our regional semolina cake. The polenta literally soaked up the accompanying mango and passion fruit cream, and the fresh seasonal fruit -– red grapefruit sections, blueberries, strawberries and kiwi – added color as well as flavor. This dessert was an extremely enjoyable change of pace and a most fitting finishing touch to a superb meal.The writer was a guest of the restaurant.Angelica
Fine Grill
Kosher
4 George Washington St., Jerusalem
Tel: (02) 623-0056