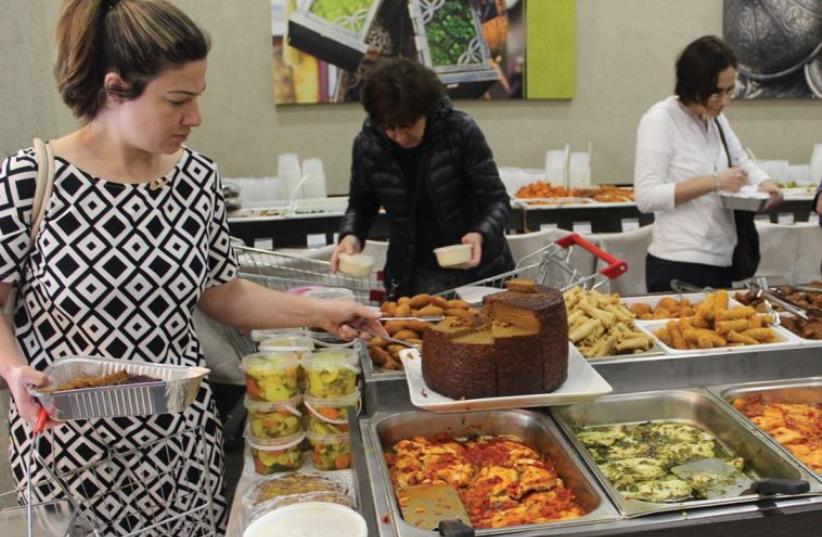 Jerusalem’s Pasha catering
(photo credit: PR)
Advertisement
The famed 16th-century rabbi the Maharal of Prague wrote in is his Passover commentary Gevurot Hashem that the Seder was a special time for Jewish unity.The commandment of sharing the paschal lamb with neighbors, not being allowed to eat the sacrifice in two separate groups and the edict to roast the meat whole, for example, all testify to the importance of Jewish unification on such a holy night.In today’s age of mixed-ethnicity families, finding culinary harmony between the different Jewish communities is a difficult task.In the heart of Jerusalem’s Talpiot industrial zone, however, one catering company is doing its best to strengthen holiday unity.With a picture of a fez on restaurant and catering company Pasha’s logo attesting to the establishment’s distinct North African and Mediterranean food characteristics, the decision to refrain from using kitniyot (legumes, grains and seeds traditionally not eaten by some Jewish sects during Passover) and legume-based oils earns the prepared food store an order of distinction.What this means is that families that do not have the custom of refraining from legumes on Passover can easily host those who do, all the while not having to compromise on serving the traditional holiday menu that they brought with them to Israel from North Africa and other Middle Eastern countries.From a pre-Passover tasting of several items on the menu, the Moroccan-style and herb-seasoned tilapia fillets (NIS 12.90/100g) were succulent and didn’t lose any of their soft texture even after being on the blech (Yiddish word for stove cover) for a Shabbat evening meal.The hraime Libyan fishballs (NIS 11.90) were piquant, yet only mildly spicy – even for someone who grew up in an Ashkenazi kitchen completely devoid of even the thought of a hot pepper. How you plan to mop up the rich tomato sauce with matza isn’t something Pasha can help you with.Moving on to the main courses, the simple homemade beef kebabs (NIS 9.90) impressed the grownups and children alike, and the beef tongue in root-vegetable sauce (NIS 15.60) was incredibly tender. The pullet’s stuffing of ground cashews and pistachios (NIS 19.60) had a very rich flavor, but they complemented each other well.The grilled pargit or spring chicken (NIS 19.60) was also a big winner, earning the title “grilled to perfection,” and the cooked olives in tomato sauce (NIS 6.70) and fried cauliflower balls (NIS 7.90) proved to be the most sought-after side dishes on our dinner table.Relative to the regular menu, Pasha’s Passover menu is more than generous, and the only item with a Passover asterisk is the kubeh nablusia, a deep-fried croquette filled with spiced ground meat or mushrooms, which will be made with matza flour instead of its traditional bulgur wheat dough.Pasha also offers two fixed-meal options for large groups. For NIS 115 per person, diners will receive six salads, two main courses, two side dishes and a choice of four items from an assortment of side dishes, such as potato and vegetable pancakes, stuffed matza cigars and matza balls.The second option (NIS 125 per person) replaces the side dishes with a choice of one to two entrees from an assortment of fish and stuffed dishes. The minimum order is for 10 people, and is only available in multiples of five.Orders can be made between 8:30 a.m. to 2:30 p.m. The caterer recommends ordering for the Seder by Monday, April 18.Prepared food will be available for purchase without advance order on April 21 from 3 p.m. to 8 p.m., April 22 from 8 a.m. to 3 p.m., April 27 from noon to 6 p.m. and April 28 from 8 a.m. to 3 p.m.

The writer was a guest of the restaurant.Pasha Restaurant and Takeaway Food
Kosher for Passover, no kitniyot
28 Pierre Koenig, Jerusalem
Tel: (02) 648-2220
Advertisement
Subscribe for our daily newsletter