The kosher dairy restaurant is a desirable destination 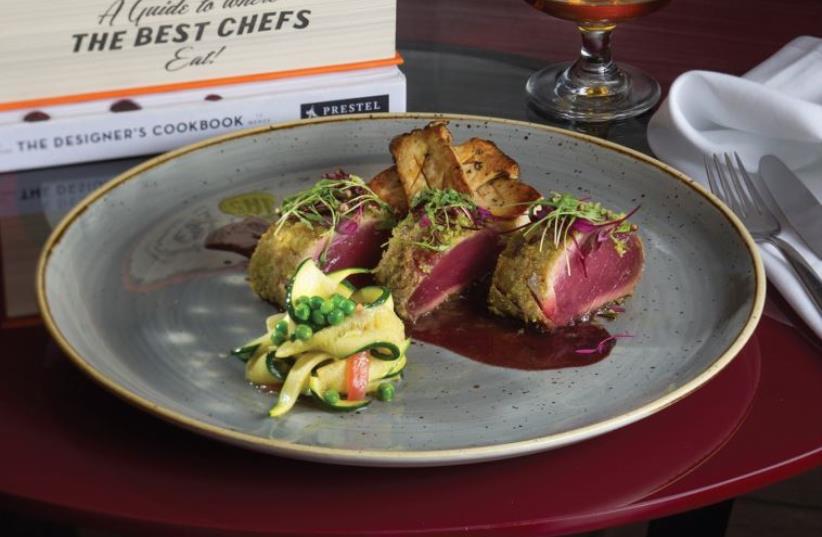 Sofia restaurant
(photo credit: PR)
Advertisement
Located on the lobby level of Jerusalem’s renowned Inbal Hotel, Sofia is a dining destination that serves food that is a cut above the rest. Chef Nir Elkayam is the mastermind behind this impressive cuisine. It is evident that a lot of thought and preparation went into developing this restaurant’s design and menu. All the dishes are made from scratch on the premises.The restaurant exudes charm, and it is clear that the owners are not just creating a restaurant but a destination, with regulars who go there as much for the warmth and camaraderie as for the tasty food.The menu offers a large selection of starters, salads, soups, pasta dishes (including ravioli and gnocchi) and fish dishes. As no Italian meal is complete without a good bottle of wine, Sofia boasts an impressive wine list that includes some of the best reds and whites that Israel has to offer.While we waited for our starters to arrive, our ever-attentive waiter brought us some piping hot homemade bread. It is served to all patrons, on the house, with a ceremonious mixing of olive oil and balsamic vinegar.We began our meal with a succulent red tuna tartare (NIS 68).The mixture of fresh onions, tuna and a hint of lemon got my taste buds dancing. Alongside it, we ripped away at the tasty house bread.This was followed by the spinach salad with goat cheese (NIS 47). I usually don’t like raw spinach, but this spinach was very good and fresh. I really enjoyed the smooth creamy goat cheese, as well as the slightly sweet balsamic dressing.Surprisingly light but robust with flavor.Next up was the mushroom and Parmesan polenta (NIS 47). It was exactly the way I like polenta – super thick and creamy with a nice chunky texture from the grains. The stir-fried mushrooms in the polenta were seasoned expertly, allowing the earthy flavor to mix with the Parmesan. This is a dish that you want to curl up on the sofa and eat in front of a roaring fireplace. We’re talking serious comfort food.After a bit of a breather, it was on to the mains. First up was the spinach and artichoke cappellaci (NIS 68), which was fantastic. The small pasta pockets of cappellaci were filled with spinach served with artichoke confit, stir-fried with cherry tomatoes, garlic and goat cheese.The pasta was fresh and heavenly and cooked to al dente perfection.This was followed by the sea bass fillet (NIS 105) on a bed of creamed leek and caramelized shallots with chili. The fillet was seared beautifully golden brown with a touch of crispness. When you put your fork through the layers of the fish, the fillet broke nicely and was tender to the taste. The creamed leek was delicious, and the texture of the fish was smooth and buttery.We were then presented with the barramundi (Asian sea bass) fillet (NIS 105) on a bed of fine piquant lentils with garlic confit and red onion. The fish was cooked perfectly and was tender and fresh. The lentils were delicious and creamy with a pleasant spicy kick. All the flavors were a nice combination of spicy and savory.We ordered hot drinks and took another breather. Then came dessert.We opted for the chocolate mousse and tiramisu, which was a perfect end to the meal For the everyman looking for a classy night out, Sofia is a solid choice. The food is high-end ordinary fare, served with style. Don’t expect adventure or exotic foods you haven’t tried before. Do expect food you know, and expect it to taste great. I recommend it to anyone who loves food – Italian or not The writer was a guest of the restaurant.Sofia Kosher Inbal Hotel3 Jabotinsky Street, Jerusalem Tel: (02) 675-6688