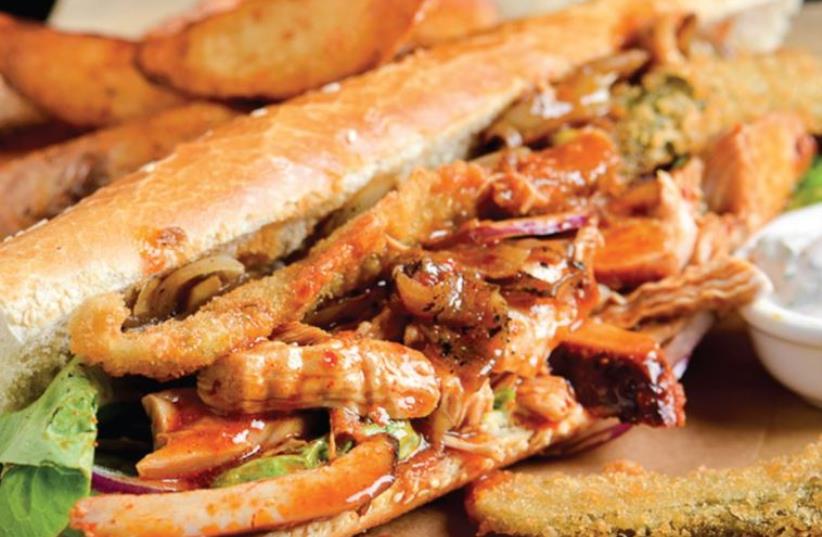 Asia Monica restaurant
(photo credit: PR)
Advertisement
"When Asia and America Meet” is the slogan of the popular restaurant Asia Monica in the Sharonim Mall in Hod Hasharon, which came up with the concept of one eatery serving both Eastern and Western cuisine – not as fusion but from two parallel menus. Every Thursday evening this month, the latter cuisine goes South as chef Daniel Zach serves up the greatest culinary hits of New Orleans in honor of Mardi Gras.As there are just three dishes on the special Big Easy menu, they are listed only on the restaurant’s digital menu, viewed on the table’s iPad. Ordinarily searchable in both Hebrew and English, the colorful electronic menu displays the Cajun offerings in Hebrew only, although the pictures tell the story.There are two special cocktails for the occasion. The Asia daiquiri features carambola (star fruit) and persimmon with rum and lemon juice for a refreshing and citrusy cocktail. The berry daiquiri, made with rum and sour mix, is equally refreshing, with sweet and tart overtones (NIS 35/40).We sampled each of the three Mardi Gras offerings, starting with the seafood gumbo (NIS 108): a hearty Creole broth, occasionally fortified with bourbon and chock full of fish, seafood and okra. An island of creamy grits (the Dixie variant of polenta) floated in the tasty soup, rendering the gumbo a most satisfying dish.Next was Asia Monica’s take on the Po’ Boy (NIS 68), the New Orleans contribution to the world of the hero or submarine sandwich. A warm sesame seed baguette moistened with Thousand Island dressing was filled with slow-cooked “pulled” veal that had been marinated overnight in the chef’s terrific barbecue sauce, then dressed with shredded lettuce and pickles.The pleasant surprise was that the pickle were fried – to crispy perfection on the outside – with the pickled cucumber itself retaining its full flavor. I could have eaten a whole plate of just those pickles. The Po’ Boy was served with a generous side of French fries, accompanied by a zesty remoulade.It wasn’t until the third and final dish – jambalaya (NIS 88) – that we felt the welcome heat generated by Cajun spices. Served in a skillet, the savory red-tinted rice was studded with morsels of kabanos (standing in for the usual andouille sausage), beef, chicken and goose breast, plus the occasional shrimp. The taste was sublime, each mouthful leaving a pleasant, lingering warmth on the palate.Mardi Gras food calls for beer, and Asia Monica had a wide international selection, including domestic and imported brews on tap.There was also a trio of desserts: one Southern favorite, one Louisiana tradition, and one – King cake – that makes its appearance only during Mardi Gras. The King cake (NIS 36) – decorated in icing the colors of Mardi Gras: gold, green and purple – was a large wedge cut from a ring of cinnamon-filled yeast cake and drenched in a succulent bourbon and vanilla sauce. We dredged the plate with the pastry for every last drop of the beige nectar.The pecan pie (NIS 42), topped with vanilla ice cream, had a cocoa accent. It came with a carafe of the yummy bourbon and vanilla sauce, as well as a chocolate tuille for a touch of elegance.The Bananas Foster (NIS 36) – invented in New Orleans in 1951 – boasted its own decadently rich sauce: ripe bananas gently fried in rum, brown sugar, butter and cinnamon to create a butterscotch masterpiece, enhanced by the crunch of ground peanuts. Also crowned with vanilla ice cream of exceptional quality, this was a dessert not to be missed.With toe-tapping Dixie music playing in the background, the Mardi Gras feast at Asia Monica made for a fun, tasty and memorable evening. Too bad it comes only once a year.

The writer was a guest of the restaurant.Asia Monica
Not kosher
2 Harakun Street, Hod Hasharon
Tel: 053-944-4164
Advertisement
Subscribe for our daily newsletter