“I love this country,” said front man Jesse Hughes. “I love everything about it. I believe in you and I am proud to be in this f**king country.” 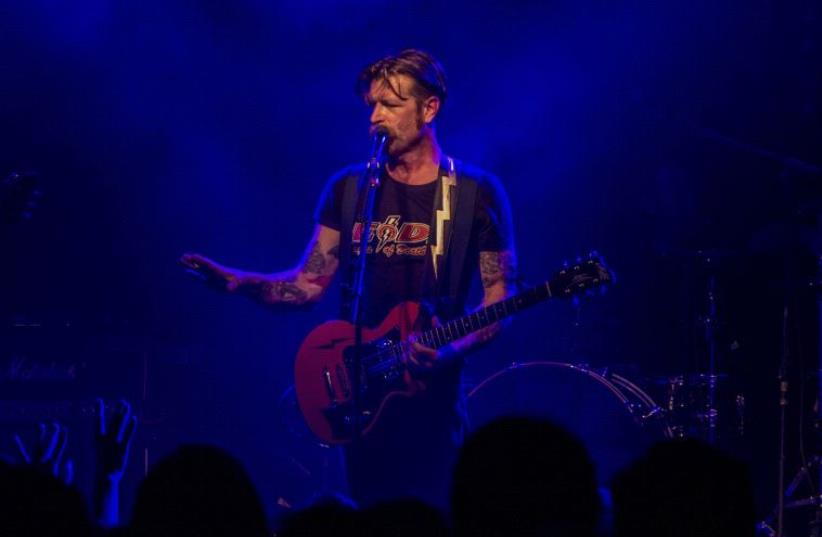 Eagles of Death Metal frontman Jesse Hughes.
(photo credit: ROY DANIEL)
Advertisement
“L’chaim!” Front man Jesse Hughes cried in salute to the crowd, as the members of Eagles of Death Metal passed around a bottle of Tubi 60, Israel’s one and only murky lemony liqueur. “It’s like drinking gasoline, but gasoline that tastes incredibly good. I’m so happy to see you mother f**kers you have no idea!” Thus began a night at the Barby Club on Monday in Tel Aviv, a night of pulsating, suspender-wearing, vein-popping classic-rock-meets-rockabilly whose musical precision and energy was matched only by euphoric moments of international Israel love.“I f**king love you mother f***kers.” Hughes lavished on the crowd between tunes. “You have no idea how happy we are to be back here.”“I wanna tell ya’ll something because I think it’s important. I feel really happy. I feel really safe. I feel like I’m home and I want you to know how much we appreciate that.” He became almost inaudible over the roar of the crowd at this, each member of the Israeli audience galvanized by the support. Israeli fans are frequently over-looked by international musical acts due to the aggressive pressure on them by the Boycott, Divestment and Sanctions movement (BDS).“This has been a weird f**king year, ya’ll. We needed you tonight and ya’ll did not let us down.” Weird is an understatement. It was Eagles of Death metal who were performing at Paris’s Bataclan theater last November, the night of the horrifying city-spanning terror attacks that took the lives of 130 people, including 89 at the concert alone. All of the band members survived, but their head merchandiser and two members of their record label were murdered, and Hughes narrowly escaped a similar fate when he ran straight into one of the gunmen in the hall. 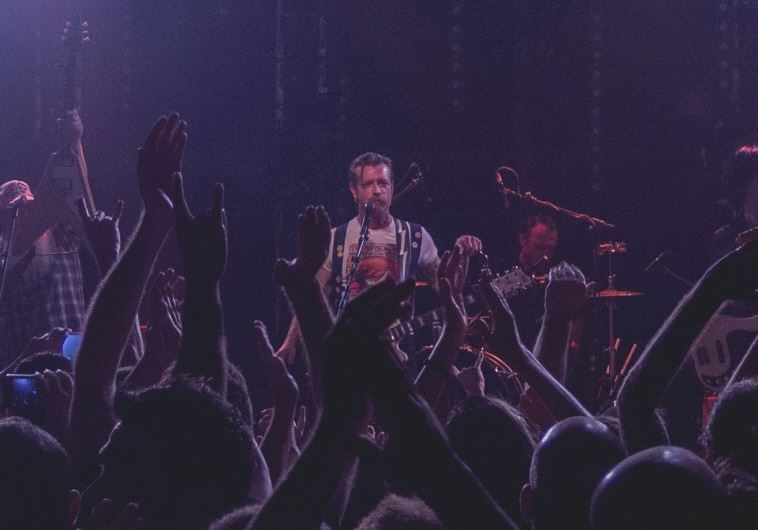 The Eagles of Death Metal at Tel Aviv's Barby Club. (Photo credit: Roy Daniel)
Actually, the Eagles of Death metal showed Israel love long before their brush with devastation. At their Tel Aviv tour stop in 2015, Hughes told the crowd how Roger Waters, the former front-man of Pink Floyd and an outspoken supporter of the BDS movement, asked him to reconsider performing in Israel. Hughes said he had “two words” for Waters, and proceeded to pronounce the obvious profanity to the cheering crowd.Last night, playing up a southern accent to resemble a fire-and-brimstone preacher, Hughes continued the barrage against Waters under a thin veil of expletives. “The first time we came here, we didn’t know nobody but we felt welcome and I already knew that this was the greatest place in the world. Sometimes, I get in trouble with assholes for how much I love this place but I don’t give a f**king rat’s ass. Because, you see, my mama told me, never give a rat’s ass what an asshole thinks, ladies and gentlemen. My point is, we came, and we made friends that are like family to us… we f**king love you mother f**kers, do you have any idea? We get to come here and hang with ya’ll, and swim in ya’ll’s beaches, and eat ya’lls food! WE DIG IT, DO YOU DIG IT?”After a riotous, antics-filled first act, what at first seemed to be a standard encore was really a whole other half of the show, including individual solo stage appearances by each band member, spirited audience participation, and spectator crowd surfing. Women from the audience stormed the stage for a final reprise that left the audience breathless and Hughes shirtless. Highlights of the night included “Complexity,” “I love you all the time,” and “I want you so hard.”Last night at the Barby was an entirely inclusive experience, with fists flung high and band members making hand-hearts and receiving them right back from the audience. Kisses were blown all around, devil-horns to devil-horns. The elated crowd danced, sang along with each song - and bought every single item off the merchandise table, completely cleaning it out.“I love this country,” said Hughes. “I love everything about it. I believe in you and I am proud to be in this f**king country.” In showing the love, Hughes made space for his fans to feel proud, too. It was a wild night of healing through rock in Tel Aviv. Jason Shaltiel and Reuters contributed to this report.