Everything’s coming up roses for ‘Bumblefoot’

After a decade as guitarist for Guns & Roses, Ron Thal is following his muse – all the way to Tel Aviv. 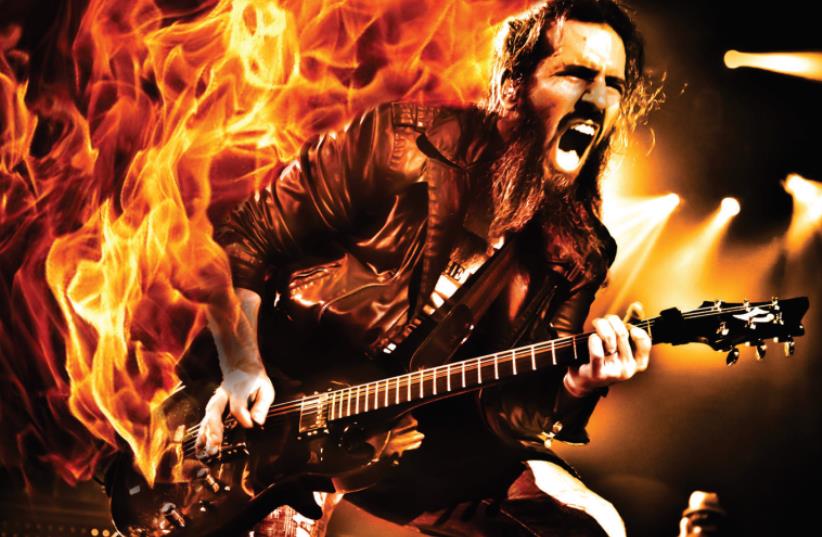 American guitarist Ron ‘Bumblefoot’ Thal
(photo credit: KATARINA BENZOVA)
Advertisement
As far as day jobs go, playing guitar for Gun & Roses isn’t bad. Over the past nine years, blasting power chords while standing next to Axl Rose has provided Ron “Bumblefoot” Thal with a rare situation for a working musician – the freedom to pick and choose his personal musical projects.That can mean anything from journeying to Dubai to perform with local bands, trekking to Pakistan to play a special show for orphans or winding up in Ireland to perform at a benefit for an autistic children’s center.It also means traveling to Israel as often as the opportunity arises – whether it be joining the metal band Salem onstage in 2011 to perform their album Kaddish during the week of Holocaust Remembrance Day, anchoring Guns & Roses at Hayarkon Park the next year or parachuting in this week for a series of shows with his friend, fellow master guitarist Yossi Sassi, and workshops with guitar students in Nazareth and Jerusalem.“Since the last Guns & Roses show in June 2014, I’ve been able to focus on getting my latest album out, I’ve done a lot of producing and I’ve played all over the world,” said the 46-year-old Thal on Monday, hours after arriving from Islamabad and already on the way to his first rehearsal with Sassi and his band.“But it’s playing the way I want to play, which is not just doing shows, but doing things that incorporate teaching, workshops and charity work. It’s sort of living by my own rules, which sounds a little more chaotic than it really is. It’s more doing what I feel is important to me and fulfilling the purpose I started to make music for in the first place.”Growing up as Ronald Jay Blumenthal in a Jewish household in the Bay Terrace neighborhood of Staten Island, Thal became obsessed with the guitar after hearing Kiss.By the time he was 13, he was performing in clubs has remained a professional musician and producer ever since.One of the few high-profile rockers who publicly identify with Israel, Thal turned into a viral Zionist poster boy when a clip of him playing an impromptu acoustic version of “Hatikva” for a handful of fans backstage at Hard Rock Las Vegas last year was posted on YouTube.His identification with Israel as well as his sense of Jewish identity has been strengthened by his repeated visits to what he calls his homeland.“When you go back to somewhere that you know is in your blood and your DNA, there’s a sense of coming home. For me, it puts me more in touch with my roots, if that makes sense,” said Thal, adding that he had many relatives originally from Lithuania and Poland who were killed in the Holocaust.Thal, whose status in Guns & Roses is unclear (as is the entire status of the band), met Sassi, the former guitarist for Middle Eastern metal favorites Orphaned Land, on one of his prior visits to Israel, and the two have forged a global friendship.He put in a guest appearance on Sassi’s 2014 debut solo album Desert Butterflies and jumped at the chance playing together live.“Guitarists are always in touch with each other on social media – it’s a big global community,” said Thal, who will be joining Sassi Tuesday night at the Tmuna Theater in Tel Aviv. “Yossi and I became friends, stayed in touch and always said we would play together when we could. I’ll be joining his band and playing rhythm and chipping in a few solos. His stuff is complex and needs some practice. We’re also going to be doing some of my material.”On Wednesday night, the two will conduct a workshop for musicians at Beit Hayotzer at the Tel Aviv port. And on Thursday, Thal is traveling to Nazareth in the afternoon for a master class with guitar students and in Jerusalem in the evening for the same at the American Cultural Center, sponsored by the US Embassy. And over the weekend, he’s going to film scenes in Jerusalem for a video to accompany his song “Don’t Know Who To Pray To Anymore” from his most recent album Little Brother is Watching.In between all that activity, Thal is going to visit Israeli startup GTC Sound Innovation which has developed the RevPad, a wireless device that can be attached to an electric guitar, granting the player total control over his audio environment.“It’s almost like a little iPad that sticks on your guitar that controls all your effects by simply scrolling your fingers on the screen instead of using on/off foot pedals. It sounds great,” said the self-confessed guitar geek Thal.Thal acknowledged that he’s intent on experiencing as much as possible on every trip he makes abroad. And based on his description of his pre-Israel trip to Pakistan, he’s not taking his special access and status for granted.“We worked for four years to try to make that trip happen, and it finally did. I spent time with and played for local orphans and abandoned children in Islamabad, and did a couple shows with a bunch of local bands,” said Thal. “And, like everywhere I go, the people there were warm and loving. It was fantastic.”Rejoicing in the paradise city that he’s been afforded due to his talent and good fortune, Thal expressed gratitude that he’s been able to set his own agenda and living by his own rules. But he readily admits that achievement didn’t come overnight.“It took 40 years of playing to get to that this point,” he said.It will be interesting to see where the next 40 take him.