A variety of Italian-style dishes that will put the cheese front and center during your Shavuot feast. 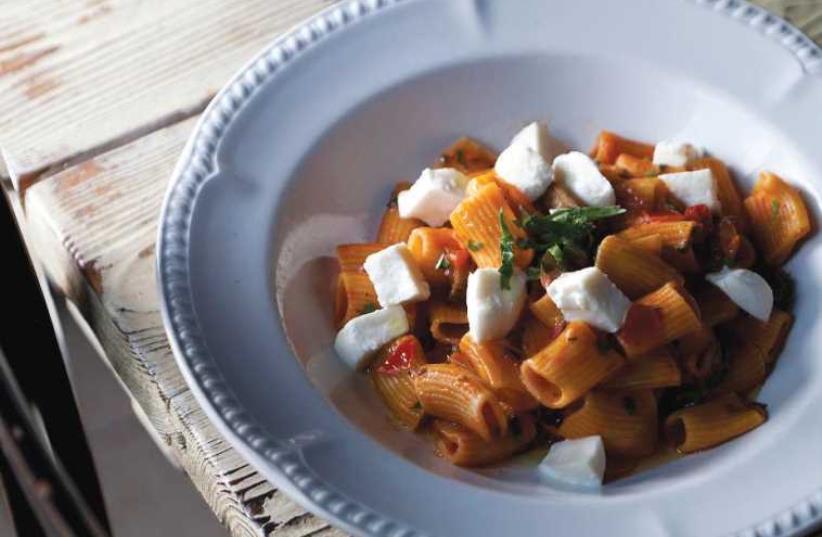 Penne melanzane
(photo credit: DANIEL LAYLA)
Advertisement
Gearing up for Shavout, the next holiday on the horizon, Gad Dairies has published Italian-style dairy recipes created by some of Israel’s top chefs. All the cheeses used in the recipes were made by Gad and are available at most supermarkets in the deli section.

For serving:
Finely grated Pecorino cheese (Gad Pecorino is available at supermarkets) To prepare the salsas: Mix ingredients of the tomato salsa together and season to taste. Blanch the herbs in boiling water for 3 minutes and immediately transfer to ice water. Grind in the food processor with olive oil until smooth and set aside.

To prepare the arancini: Mix all the ingredients together until smooth. Using wet palms, form 5-cm. balls. Place flour, lightly beaten eggs and bread crumbs in three separate soup plates. Heat the oil in a deep pot, dip the balls in the flour, then in the egg and then in the bread crumbs. Fry 1 to 3 balls at a time on all sides, about 3 minutes, until they are golden. Transfer to a plate lined with paper towels.To serve:  Place the green salsa on each plate, top with the red salsa and place three arancini on each plate. Garnish with grated Pecorino or Parmesan cheese. Serve immediately.
PARISIENNE GNOCCHI
Serves 6 Parisian style gnocchi are made from rich cheesy choux pastry rather than the Italian mashed potato. Chef Nir Veiman of Mel & Michel in Tel Aviv says this is one of his most popular dishes, and customers keep asking for it again and again.✔ 100 gr. butter
✔ 1 level Tbsp. Dijon mustard
✔ 1 level Tbsp. salt
✔ 1 cup water
✔ 200 gr. flour
✔ 1⁄3 cup (40 gr.) grated Pecorino cheese
✔ 1⁄3 cup (50 gr.) grated mozzarella cheese
✔ 2 eggs + 1 egg yolk

For the sauce:
✔ 2 cups cream
✔ 1⁄3 cup grated Pecorino
✔ 2 Tbsp. truffle paste
✔ Salt
✔ 2 Tbsp. butter For frying:
✔ 3 Tbsp. olive oil For the garnish:
✔ Grated Pecorino
✔ Baby salad greens To prepare the gnocchi: In a pot with the water, add Dijon mustard, salt and butter and cook until butter is melted. Stir and add the flour. Mix with a wooden spoon until dough is formed and all the water is absorbed. Turn off the heat. Add the cheeses and stir until smooth. Add eggs one at a time, stirring between each one. Add the yolk and stir again. Boil water in a large pot and prepare a bowl with ice water. Transfer the cooled batter into a pastry bag and squeeze out 2 cm. gnocchi. Use scissors to cut them and let the gnocchi drop into the boiling water. Cook the gnocchi until they float up to the top. Remove from the boiling water with a slotted spoon and place them into ice water for 5 minutes. Then transfer them onto paper towels to dry off.To prepare sauce: In a small pot, heat cream and cook until it reduces by half. Add Pecorino cheese and stir until melted. Remove from heat, add truffle paste, salt and butter and whisk until smooth. Heat oil in a non-stick skillet and brown the gnocchi lightly on all sides, about 7 or 8 minutes. Pour 1 Tbsp. of the sauce on each serving plate and place gnocchi on top. Garnish with grated cheese and baby salad leaves.
PENNE MELANZANE
Serves 4 Much like the Italians, Israelis love eggplant dishes. That is why, says Chef Nadav Sherez, it is no surprise that his customers at Manuella in Zichron Ya’acov love the Italian classic. He says the preparation is relatively simple, the flavors are strong, and the sauce can be prepared in advance.✔ 500 gr. penne pasta
✔ 1⁄3 cup olive oil
✔ Salt and pepper
✔ 2 large eggplants, cut into 2-cm. cubes
✔ 3 cloves garlic, thinly sliced
✔ 3 tomatoes, cubed
✔ 8 basil leaves
✔ 2 cups tomato puree
✔ 3 large balls fresh mozzarella, cubed
✔ 50 gr. Pecorino, grated
✔ Handful parsley leaves, chopped Heat oven to 180° and line a baking sheet with parchment paper. Place eggplant cubes in a bowl, add 4 Tbsp. olive oil, salt and pepper and mix well until all the eggplant is coated. Transfer to the lined baking sheet and bake about 20 minutes until eggplant is golden. Remove from oven and let cool. Heat a little olive oil in a pot with garlic until fragrant. Add fresh tomatoes and cook for 10 minutes. Add eggplant, basil and tomato paste and cook over low heat until sauce is thickened. Cook pasta in salted water according to the package instructions. Five minutes before the pasta is done, add a ladle from the cooking water into the sauce and heat over low heat. Drain pasta and transfer into the sauce. Mix, add parsley and cheeses and mix again. Serve immediately.  Recipes and photos courtesy of Gad Dairies.