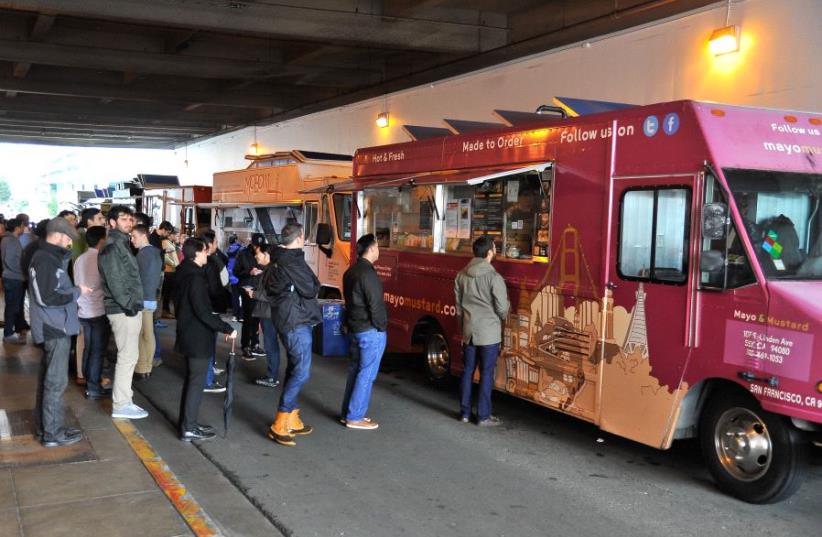 People line up at a food truck in San Francisco , California
(photo credit: STEVE JENNINGS / GETTY IMAGES NORTH AMERICA / AFP)
Advertisement
Want that falafel and those fries to go? You’re in luck, because the first fleet of food trucks in Israel is coming to Jerusalem.On Tuesday, the business development department of the Jerusalem Municipality and the Jerusalem Innovation Team announced the tender for AutoChef, which plans to serve business and industrial areas during the day and residential neighborhoods at night.According to AutoChef, the initiative “seeks to bring a commercial front to areas in the city where permanent infrastructure is currently deficient, serving as a lab for the future development of these areas, while giving participating restaurateurs a chance to reach new customers.”Until recently, all attempts to launch food trucks in Israel have been vetoed by the Health Ministry on regulatory grounds.“AutoChef solves this challenge by creating a fleet of five to seven trucks, each with a single culinary specialty and run by a local restaurant,” the company said in a statement.“Neighborhoods and business areas currently underserved in the culinary sense will have the opportunity to enjoy gourmet food, experience the creative use of public space and build location-based social and professional connections.”AutoChef added that participating restaurateurs will also be offered prospects for expansion to provide service in underserved areas.Noting the capital’s budding foodie scene, Jerusalem Mayor Nir Barkat welcomed the tender as an opportunity to sustain continued economic growth.“The Jerusalem culinary scene is renowned worldwide, appealing to visitors and residents alike,” Barkat said.“We want to bring restaurants to residents, workplaces and neighborhoods in order to connect Jerusalemites with their local businesses.”During the day, the AutoChef food truck fleet will be active in business and industrial areas, including Har Hotzvim and the government district. In the evening, it will cater to events in outlying neighborhoods that include “cultural or social content organized in collaboration with local community councils,” AutoChef said.On weekends and holidays, the fleet will be active at tourist and leisure sites, such as parks, museums and the Old City.Inbal Moses, director of the municipality’s business development department, said demand appears high for the trucks’ services.“In many neighborhoods and business districts in the city, there is a considerable lack of commercial and entertainment development,” she said.“This initiative brings businesses to neighborhoods and residents, answering an existing need and strengthening businesses at the same time.”“The spirit of innovation in Jerusalem has reached the culinary scene, strengthening businesses and enriching public space,” said Sharone April, director of the Jerusalem Innovation Team, which was created by Barkat to provide unique solutions to boost the capital’s struggling economy.“We are proud to be partners in the AutoChef initiative, and eagerly await seeing neighborhood residents and people working in the city enjoying quality culinary, community and social events,” she added.A conference for bidders will take place on April 11, hosted by the business development department.