For the love of Japanese food

The remodeled Hilton Yakimono is well worth a visit. 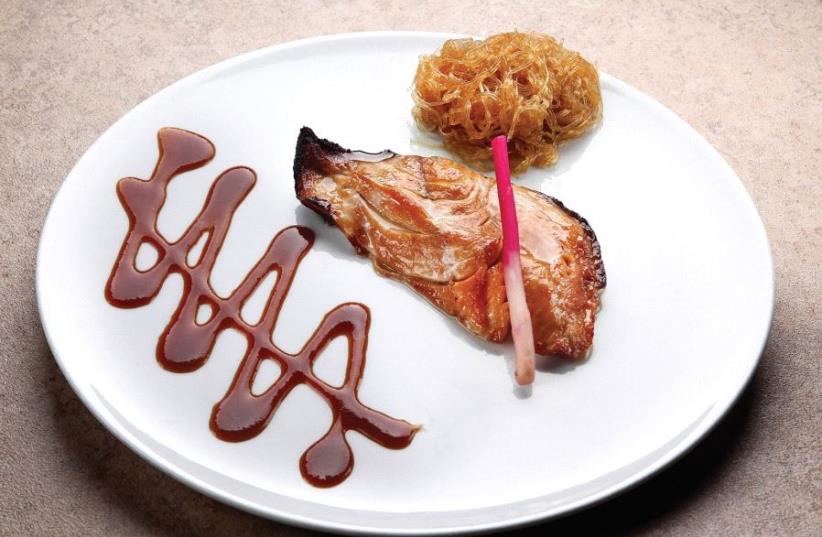 Hilton's Yakimono restaurant
(photo credit: PR)
Advertisement
Do you crave Japanese food but only eat kosher? There aren’t too many choices in Israel, but a new Japanese restaurant just joined the exclusive club. The Hilton Tel Aviv Yakimono has undergone a facelift, upgraded itself from a sushi bar to a full-blown restaurant and is ready to give its guests the low-down on everything Japanese.Yakimono is one of a chain of Japanese restaurants founded by the late Avi Cohen, who had the foresight of knowing that Israelis would love Japanese food. Today, his extended family run the restaurants.There is one in Eilat at the Queen of Sheba hotel; one in Jerusalem at the David Citadel hotel; and two in Tel Aviv, the other one being on Rothschild Boulevard.Closed for the last two and a half months for renovations, the Hilton Yakimono restaurant reopened recently with a flourish, getting off to a good start with tastings of Born sake, imported by the Katokichibee Shoten Company. The CEO, Atsuhide Kato, was on hand to explain the finer points of his product, which has kosher certification from the Kosher Division of the London Beit Din (KLBD).Sake, an alcoholic drink made from rice, is pleasant to imbibe and leaves a mild tang on the palate. We were told it was 15% alcohol, but it didn’t produce more than a warm glow.Seated at long tables, the guests waited eagerly for the food to arrive.This was not going to be a normal three-course meal but a chance to taste the many and varied incarnations of authentic Japanese food.The first dish to arrive was the kaisu special, which turned out to be glass noodles with smoked salmon, nori seaweed, avocado and cucumbers in chef sauce. The chef sauce was actually lashings of soy sauce and not much else, but it made for a very promising start to the meal.Next up was maki mushi – steamed rolls of rice paper filled with spinach, accompanied by a delicious miso sauce that was spicy and sweet.The maguro pepper consisted of very thinly sliced seared fresh tuna, with equally thin slices of peeled lemon, with ginger and soy sauce.We were advised to eat the fish and lemon in one mouthful.Shitaake mushrooms soon replaced the tuna. They were stuffed with sushi rice and served on a plate of tehina, which we thought rather odd.“It’s an Israeli twist on the original Japanese concept,” explained one of the waiters.Kuruma fish was a dish of pieces of sea bass in wasabi cream. Wasabi is the Japanese version of what we call chrein (horseradish), although in texture and color there is no resemblance. But the sting is the same.Campachi maki sushi was a roll of sliced yellowtail fish, green onions, avocado and tempura.After tasting so many textures and flavors, it was a relief to get to a more recognizable dish, a fillet of gray mullet in coconut milk, basil and hot chili, with rice. This was called shiroma zakana bazil and was totally delicious.The final main course, grilled black cod marinaded in miso with glass noodles, was equally good.Everything brought to the table was very esthetically presented – a joy to behold as well as to taste.A word about the restaurant’s decor. According to the invitation to the event, the aim was to mix “the purity and simplicity of Japanese decor with the Bauhaus elements seen all over Tel Aviv.” The new look features a blonde parquet floor, light gray walls, and white marble surrounds above the panels of taupe wall tiles. Cherry blossom prints adorn the walls, and the glasstopped tables use straw place mats in a geometric design. The comfy chairs are upholstered in light green velvet.Guests are assured of a great culinary experience at the new Hilton Yakimono.The writer was a guest of the restaurant.Hilton Yakimono Kosher 205 Hayarkon St., Tel Aviv Tel: (03) 520-2128 Open noon to midnight every day The writer was a guest of the restaurant