Lucinda Childs presents her seminal piece at the Jerusalem Festival. 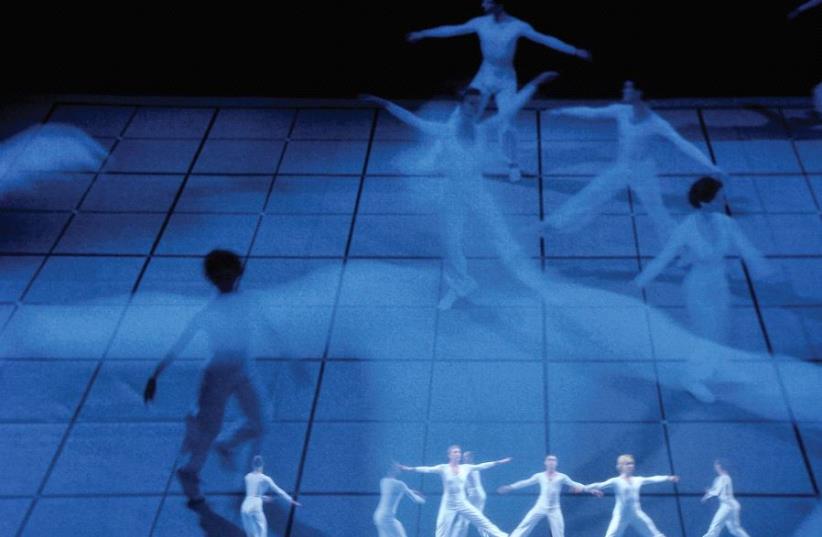 Lucinda Childs’s Dance
(photo credit: PR)
Advertisement
Thirty-eight years ago, taking Lucinda Childs’s Dance on tour meant schlepping aluminum canisters on planes, trains and buses. To Childs’s delight, bringing her seminal piece to close the Jerusalem Festival is considerably simpler now than it would have been in the work’s first years.As part of the 2009 revival of Dance, Childs had Sol LeWitt’s film digitized.“It is so much easier to tour now. The 35mm version was very heavy and fragile. This is so much simpler,” she said in a phone conversation.While the technology LeWitt used was outdated, the content of his film remains relevant.“We talked about the concept of doubling,” explains Childs. “It was about making the décor something that was not a piece of art work of Sol’s that I was dancing in front of. Rather that the dancers would be the décor.”In Dance, Childs and her cast were perfectly in sync with the video. Their images, captured in black and white, moved exactly together with their virtual selves. The effect is something of a mirror, amplifying, dizzying and hypnotic. With her 35-minute solo, Childs’s younger self looms over the stage.In the original version, which premiered in 1979 in New York, the dancers featured in the film were seen live on stage. As the piece continued to be performed, Childs was forced to replace cast members.“In 1990, eleven years later, Sol said, ‘You’re the only original dancer left; everyone else has moved on.’ He thought it was unfortunate that there was too much change. Now it has been nearly 40 years since, and that gives a different dimension. Everyone understands that these are different dancers, different periods,” she says.In many ways, the time warp in Dance’s current staging makes the piece even more poignant. While everything has changed around the piece, even the way it is produced, the movement remains the same. These dancers, though raised in different environs and with different techniques than the original cast, are perfectly in step with them.“There are a lot of similarities in the dancers I chose then and those that I choose now. My dancers are very reliable, disciplined and generous with each other. They work like a team, they trust each other. That’s the only way that this production can happen,” says Childs.Dance is an iconic piece for many reasons, least of which because it brought together three rising American artists. The third member of the team, musician Philip Glass, is credited with getting the ball rolling. Glass and Childs met working on the opera Einstein on the Beach, composed by Glass and directed by Robert Wilson. The four-act opera premiered in 1976. It was during rehearsals that Glass first mentioned the idea of their collaborating further.“My first memory was talking to Phil Glass about continuing to work together. I had never worked with music before; I had always worked without music. But I said yes,” she recounts.Not long after, Childs received the first draft of what would become the score of Dance.“He sent me a first recording for Yamaha,” Childs recalls. “I found it to be glorious and beautiful. I found myself improvising before my company arrived.”To the group, Childs brought her flowing and minimalist movement. Trained in ballet technique and having come of age in the modern/post-modernist dance era, Childs’s esthetic was pure and simple, clean and poetic.Once there was something to film, Childs invited LeWitt into the studio, giving him carte blanche to shoot whatever he saw fit.“It was Sol LeWitt’s decision how to film, what to film, all the camera angles. All the decisions for editing were made by him. I just provided the time with the dancers in the studio,” she says.In the years since, international companies have included Dance into their repertoire. While the version Jerusalem audiences will see uses the original film, audiences of those companies will see updated versions.“The Lyons Opera Ballet will perform Dance, but their film will include their dancers, not my 1970’s cast. Giving it to a different company, it gets too far away from the original concept to keep the same film,” she explains.Continuity is something that Childs is very conscious of. Although she continues to be an in-demand artist, both in established collaborative relationships and with new companies, Childs is already putting a plan in motion for the day when she steps down from the helm of her company.“We’ve followed the Merce Cunningham model, which is one of the best models. We are setting up a trust, which will decide which piece can go where if I can’t decide myself,” she says.For now, Childs continues to enjoy pushing her artistic boundaries.“In the last 20 years, I’ve tried to stay open to doing different kinds of projects, not just working with ballet companies but also in theater and opera. That means a lot of travel and complicated scheduling, but I hope to keep that all going. I could be completely independent and decide what I’m going to do when I’m going do it, if I’m going do it. I’m the one who makes those decisions, and I feel very lucky and very privileged,” she says.‘Dance’ will be performed on June 17 at 9 p.m. at the Jerusalem Theatre. For more information, visit www.israel-festival.org.